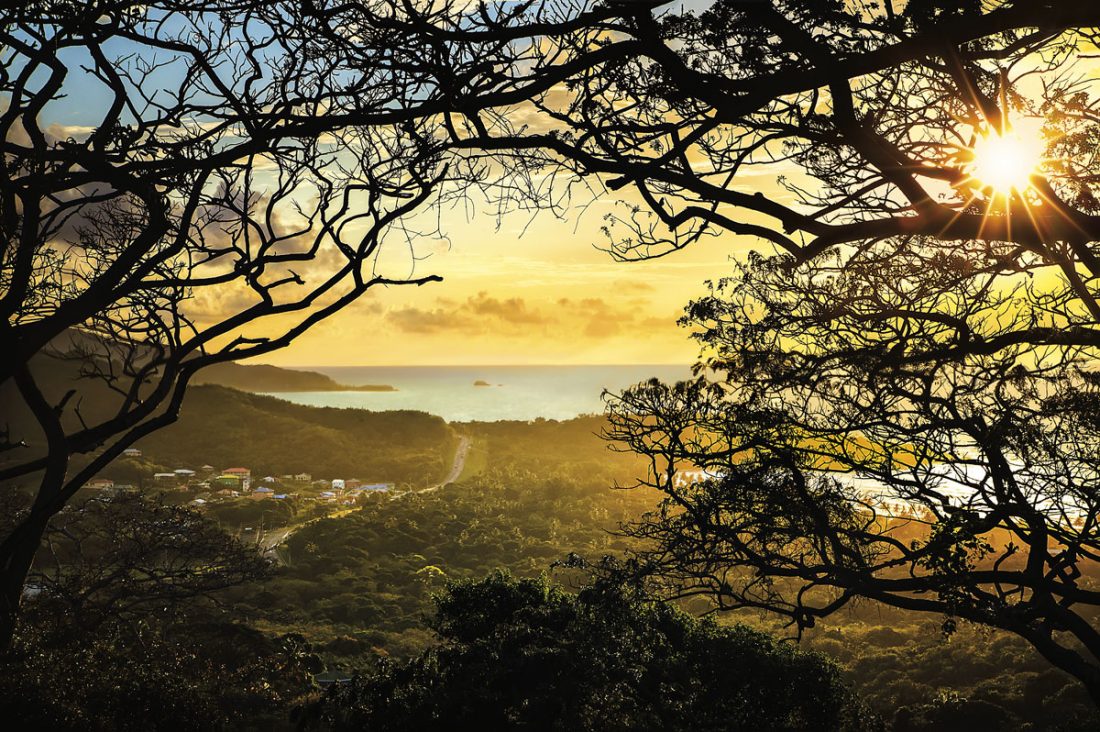 Looking north from Scarborough over the Claude Noel Highway and towards the rugged Atlantic coast. Photo by Chris Anderson

Our mini guide to Tobago

Unspoiled beaches, friendly people, relaxation. It is easy to soak in and sink into a laid-back atmosphere, and Tobago is the perfect place for that.

It is only relatively recently that Tobago embraced its reputation as a restful place. We can assume the island’s beaches have been a delight since human eyes and feet were first laid upon them, but it was the fertile interior and a geography which made it an easier place to attack than defend that combined to award Tobago the distinction of being so coveted it changed hands more than 30 times over the course of a couple of centuries. No Caribbean territory swapped colonial rulers more often. Throw in a succession of major hurricanes to lay waste to whatever economic activity dared to fill the spaces between the constant warring, and you have a country with a long history of starting over.

Today, place names like Bloody Bay – a quiet beach on the Northwest coast – are about the only relics of Tobago’s turbulent past. Still, you will understand why the island has elected to focus on being a Caribbean beach-holiday archetype since the last major storm – Hurricane Flora in 1963 – effectively wiped out the country’s cocoa industry.

Tobago is resting. It has earned this rest – as have you. It’s likely you’ll enjoy each other’s company.

Every island has a spirit of its own. Tobago’s is calm, serene, grounded. In Tobago, life becomes simple again. Time slows down – perhaps to the pace it should always have been! The stresses of your day-to-day life dissolve.

From each glorious sunrise to the iridescence of sunset, Tobago presents the visitor with an abundance of choices, from simply lazing on a white-sand beach to hiking through the rain forest in search of Blue-backed Manakins, to taking the plunge of a lifetime — dive into some of the clearest water you can imagine, with magnificent coral gardens, giant rays and shimmering angel fish for company.

Tobago also offers everything a water sports enthusiast could ever want, from Hobie Cat-sailing to kite surfing, as well as game fishing, mountain biking and horseback riding. (See our Sports section for more information)

After sunset, the options are many: cocktails, followed by a fine meal at one of the island’s first-rate restaurants; or join the lime at one of Tobago’s lively nightspots. If you’re lucky enough to be around for the Tobago Heritage Festival, Tobagonians will be more than happy to introduce you to the richness of their history, folklore, culture and cuisine during the two-week celebration. Then there’s Tobago Fest, Tobago’s answer to the Trinidad Carnival . . . and so much more.

Scarborough is the island’s capital, where almost a third of the population of 50,000 lives. It is the centre of commerce and Tobago’s port, now sprucing itself up with some waterfront improvement. South and west of Scarborough are most of the visitor facilities; to the north is rural Tobago.

Scarborough itself dates back to 1654, when it was called Lampsinsburg after the two Dutch brothers who founded it. Under French rule it was renamed Port Louis. It became the capital of Tobago in 1769 when it replaced the then capital of Georgetown, which was some way north up the coast. The House of Assembly was moved to Scarborough, and on the hill above the town Fort King George was built, mostly between 1777 and 1779.

But Tobago is not about traipsing around historical sites. Don’t feel guilty about wanting to lounge around by the pool or under a shady tree at the beach. Don’t feel bad about the hammock days. You might consider discovering the most exciting underwater landscape in the Caribbean, or trekking the hemisphere’s oldest forest reserve on the Main Ridge. You could play a round of golf on a fine championship course, or go to sea fishing or sailing alongside schools of flying fish.

You could take to the road and relish the hills and coasts. You could watch as turtles give birth on quiet, starlit beaches. Shake a leg at Buccoo’s open-air “Sunday School” party on a Sunday night. Try the Tobago jig at the annual Heritage Festival.

There are so many unique and engaging ways to experience this land of warm, welcoming people and inspiring scenery . . . . Or you could do nothing at all.

Whatever helps reclaim your peace of mind. You’ll want to come back to Tobago again and again. Isn’t that what vacations are all about?

You can tour Tobago comfortably in a day if you really want to, ticking off the highlights as you go. Or you could take a year over it and still have more to enjoy. There are plenty of guided tours available, or you can just rent a car and nose around on your own. See our Getting Around section for some good car rental companies.

Tobago looks small on the map, but its narrow winding roads mean that it often takes longer than you expect to get where you are going. So to do the whole island in a day, you’ll need to start early if you want to get back before sunset (poorly lit mountain roads are not the safest to drive after sundown).

Remember, too, that there is a 30mph (50kph) speed limit in force throughout Tobago. If you happen to be driving along narrow, twisting roads behind a law-abiding Tobagonian, your patience may be sorely tested. But remember that this is how traditional Tobago is, and take your foot off the gas. You might be stopped and charged for hurrying.

For alternatives to auto rental, look to local tour operators, or make use of the public transport system, which consists of buses, “maxi-taxis” (mini-vans) and “route taxis” (shared cars), all following set routes. See our Getting Around section for more on public transportation.