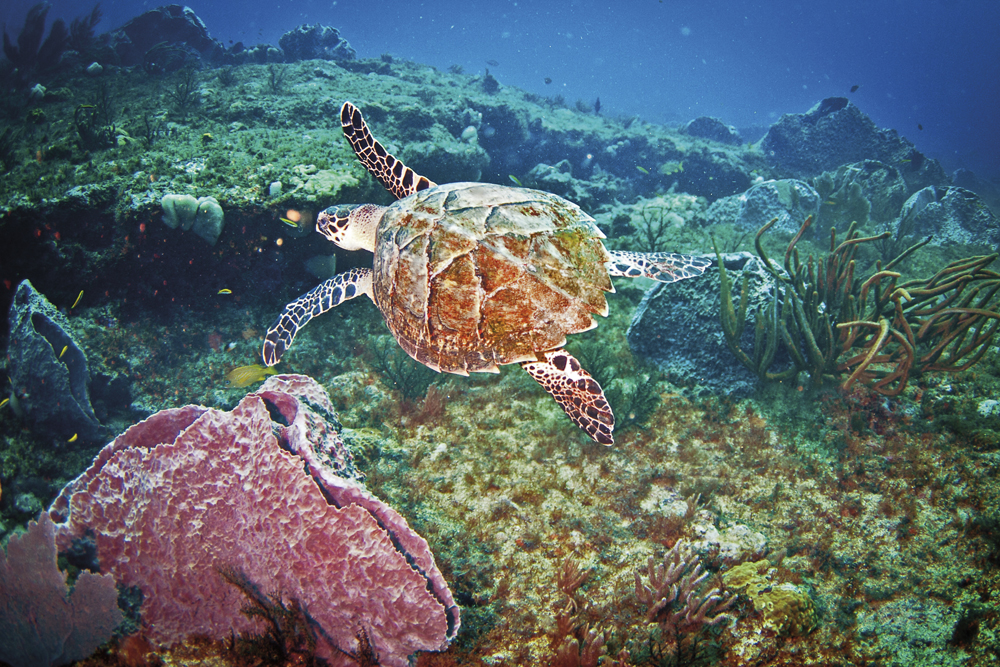 This is one of the best reasons of all for a visit to Tobago. Tobago is one of the Caribbean’s finest diving locations. Large pelagic fish, giant manta rays, turtles and a host of tropical fish inhabit plankton-rich waters whose visibility regularly reaches 120 feet or more. The healthy fringing and patch reefs host a multitude of species, including nurse sharks, moray eels, large barracuda and tarpon.

Whatever your level of experience, from absolute beginner to dive expert, the waters around Tobago offer fantastic diving opportunities. Thanks to the convergence of outflow from the Orinoco River, the Guyana current, the Southern Atlantic and the Caribbean Sea, the seas surrounding Tobago are awash with nutrients and underwater life, creating a magical underwater kingdom. Accredited dive centres and operators are located throughout the island with Charlotteville, Speyside, the Crown Point area and Arnos Vale amongst the best known. Speyside and Charlotteville, in the north, are a particularly popular base for divers (and snorkellers), but there are plenty of other sites around the island.

Tobago is able to provide a varied underwater topography that is dependent on the location of your dive. In general terms, Tobago’s underwater world consists of rock formations, long sloping reefs, sunken ships, massive mountain-like formations, shear walls, plunging submarine cliffs, level plains and striking canyons, most of which offer good surfaces where millions of coral and sponge organisms can encrust and grow. Amongst the 300 species of coral documented in Tobago’s waters, expect to see fire coral, star coral, plate coral, sea fans, sea whips, staghorns, elkhorns and one of the biggest single colonies of brain coral in the world. Wherever you dive in Tobago look forward to discovering a veritable underwater Garden of Eden.

All coral, including the ones that resemble plants, are actually living animals that grow on average between 0.5 and 4 inches each year. This means the larger coral heads found in Tobago’s waters have been growing for centuries. Coral is a very delicate organism and even the most casual contact with the reef is sufficient to kill it, so when underwater please take the utmost care not to inadvertently damage that which you have come to see. Even a minor scrape from fins or tanks can destroy the tissues of the coral animals, possibly leading to serious infection. Not only will the beauty of our underwater kingdom suffer but so too will the many species of fish, invertebrates (crabs, shrimp and octopus) and other marine life that live in close harmony with the coral.

Existing alongside exceptional ocean gardens is an abundant world of sea creatures and fishes. Sting rays, barracuda, tarpons, turtles, parrotfish, sharks, angel fish, glassy sweepers and around 700 species of reef fish are just some of the underwater inhabitants awaiting your visit. Tobago’s most famous marine attraction, is the playful Giant Manta Ray. If you’re lucky, you can also expect to see the mammoth migratory whale sharks. Additionally, expect to find many other wonderfully majestic sea creatures lazing around in the currents around Speyside and Charlotteville as well as along the Caribbean and Atlantic Coasts.

With average underwater visibility 50–120ft, a water temperature of 25–28 degrees celsius, good depth extensions and some all year round sheltered dive sites, Tobago is an ideal place for the uninitiated to literally ‘take the plunge’.

The different dive areas of the island are each distinct yet similar. You will find beginner, intermediate and expert sites within close range of each the island’s main dive centres. But an indication of the breadth of diversity offered in Tobago’s waters is provided by the two north coast villages of Speyside and Charlotteville which are close in land terms yet distinct in underwater topography.

Speyside, which faces the Atlantic Ocean, offers magnificent yet gentle slopping reefs which are well developed and teeming with life while Charlotteville, which faces the Caribbean Sea, provides vast rock formations and plunging cliffs to create a visually diverse underworld less than ten minutes away from shore. The St. Giles Islands area in particular provides excellent diving locations.

Those who have visited Tobago before and experienced diving at both the North end of the island and the Southern end often claim that diving in the North is more sophisticated, slightly wilder and that the reefs in the north are more vibrant due to less human intrusion.

Beginners will find the calmer waters of the Caribbean Sea ideal for pre-dive preparation and familiarisation of equipment. At the southern end of the island you will also find dive sites appropriate for whatever your skill level.

The calm, shallow and sheltered waters of Charlotteville Bay also offer the perfect conditions for the beginner and the north of the island is not just for intermediate and advanced divers. In an emergency the only recompression chamber on the island, The Tobago Hyperbaric Facility, is located in Roxborough and can be reached from anywhere on the island in approximately 30 minutes.

Drift diving is the most common form of diving found in Tobago and at some sites tidal currents allow for long effortless dives. Night diving is also available for persons who are proficient enough and in 1997 the M/V Maverick was intentionally sunk to add a new dive site and facilitate increased ‘wreck diving’. The wreck is home to numerous schools of iridescent fish, larger sea creatures, vibrant sponges and coral – it has also become one the most memorable dives in Tobago.

There’s wreck and reef diving off the west coast to suit all abilities. On the eastern, Atlantic coast, very strong currents, can make for great drift-diving.

Normal reef hazards, including stinging plankton. Watch out for the strong Atlantic currents. The Portuguese Man O’ War and jellyfish can leave blistering stings, in season

Tobago’s climate is tropical, and the island lies outside the main hurricane belt. So it’s diveable all year round, though run-off from heavy rains during the rainy season from April to October can reduce visibility dramatically. Sediment from the Orinoco River in Venezuela can also lower visibility. The best time is May to July

Both PADI certified and NAUI certified dive operators have made Tobago their home and offer a wide array of courses from beginner and Divemaster to advanced and night diving. It is strongly recommended that you dive only with accredited members of the Association of Tobago Dive Operators – see our interview with Derek Chung for more

Many operators offer courses for beginner divers who would like to become more proficient. Click here to learn more.

Here are just a few of the popular, certified dive operators in Tobago: