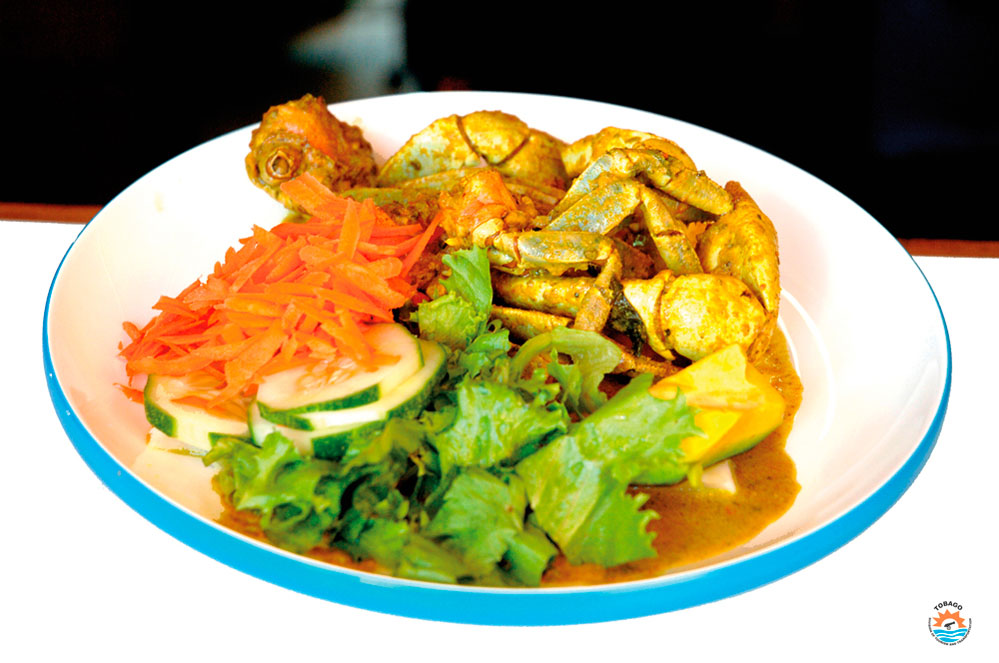 Tobago is famous for its curried crab. Photo courtesy the Division of Tourism & Transportation

A culinary tradition passed down through generations

Many of Tobago’s indigeneous culinary delights reveal just how much our ancestors valued nature’s produce and how much they recognised that nothing should be wasted.

Years ago, every family had a garden where invariably corn and peas were grown. Pigeon peas stewed in coconut milk is a favourite and when the peas get hard, you make soup with it. Corn is boiled when it’s tender and when it gets hard, you grate it to make cornmeal for pone and porridge (used to be called “corn pop“). Parched corn was grated, pound and sifted, then mixed together with sugar and a little black pepper to make “Sam Sam“. There is even a game that children used to play with roasted corn: while eating the corn, a few grains are removed to play “ship sail“. Fresh fish is easy since the ocean is always near, but before the modern convenience of refrigerators, we had smoke fish: the fish, especially bonito, was filleted, salted and smoked to help preserve it.

There was of course the usual ritual associated with the preparation of some foods: coconut oil for cooking was prepared according to the phase of the moon when it is said the most oil is yielded.

When stocks in the kitchen were at the lowest, all the “odds and ends” were mixed together to make a pot we call “Yabba“. It’s like a very thick soup with any and everything in it – whatever was left over in the kitchen, you’d put in: dumpling, fish, pigtail, potato, breadfruit, cassava, dasheen, green banana, and more. You can’t go wrong with that; every food group covered!

We still have a few dirt ovens in yards around Tobago, and many village groups have made a living from baking traditional treats in the old traditional way. The Castara Heritage Bakers bake a variety of breads, tarts, sweet breads, and buns at the dirt oven on the Castara Beach facilities, close to the Castara Government School. So every Thursday and Saturday, one can buy freshly baked delights from 11am to 4pm.

Our teas are picked and brewed from the many wild plants that grow in the yard and the bushes. Many we now know have medicinal properties. These were part of the daily beverages that accompanied breakfast and dinner, and of course, we still have our homemade chocolate tea.

TASTE THIS: Some traditional Tobago dishes and sweets

In Tobago there are lots of colourful and interesting names for food. Some of them you may already know, while others are there for you to sample. Here are a few: