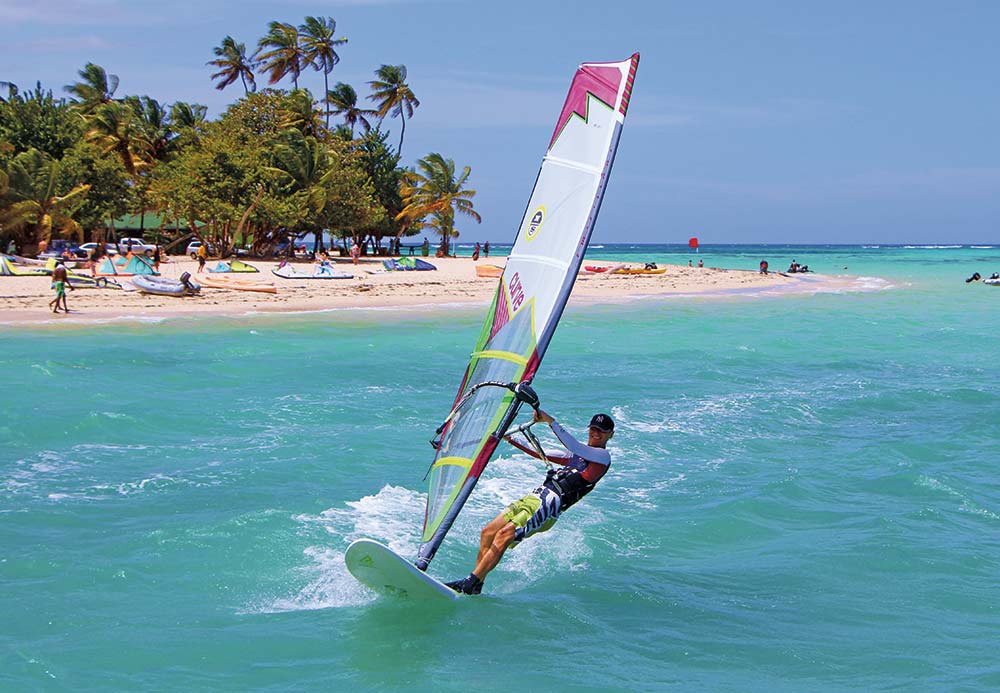 Tobago is a world-class diving location, of course, but aficionados of other sports and activities will find lots do as well.

For folks with something more adventuresome in mind, there’s a range of outdoor activities, both land- and water-based, which promise anything from a massive adrenaline rush to a gentle experience of communing with nature. Tobago’s Main Ridge reserve is a long-time haven for hikers and bird watchers.

You’ll find tennis courts at the hotels and at Store Bay — it’s is best to book for early in the morning as daytime temperatures can be quite high. For fitness devotees, Le Grand Courlan has a first-class gym and spa.

For spectators, Tobago has a healthy year-long calendar of events. In April, Tobago hosts the Tobago Game Fishing Tournament. In May, scores of yachts descend upon the island (many from Trinidad) for the Tobago Carnival Regatta. And in late summer, locals and visitors gear up for the Carib Great Race powerboat challenge. There’s also a four-day, round-the-island international cycling competition in September.

Favourite local sports include football, cricket, basketball, netball and volleyball. The Dwight Yorke Stadium in Bacolet —named in honour of Tobago’s homegrown international football star — is the main venue for football. (Check local newspapers for fixtures.) Cricket is played on various village greens; the ones at Speyside and Goodwood are particularly charming.

Scarborough’s Shaw Park is Tobago’s premier cricket location, hosting regional first-class fixtures as well as top local league games. You can probably watch or even start your own match on any beach or empty field. Impromptu games are played island-wide and don’t be afraid to join in. Trinidad & Tobago Cricket Board: 636-1577, www.ttcb.co.tt

The biggest cycling event in Tobago to which international professional competitors are drawn is the Tobago International Cycling Classic. The Rainbow Triathlon Club arranges several events, including the Rainbow Cup International Triathlon. 632-5560, www.trinbagowheelers.com

Tobago United play T&T Pro League matches at the Dwight Yorke Stadium, in Bacolet, named after Tobago’s most famous footballing son. In 2015, the THA and Professional Footballers’ Association held the inaugural Tobago Football Legends Challenge featuring 64 football stars from from top UK clubs like Chelsea, Arsenal, Tottenham, Liverpool, Aston Villa and Manchester United — including Mr. Yorke himself — playing against teams from the PFA and the Caribbean All Stars in a six-a-side competition. Outside of major events like this, ad hoc matches are staged on beaches and parks everywhere, with locals only too happy to show the visitors how it’s done. Trinidad & Tobago Football Federation (TTFF): 623-9500, www.ttfootball.org • T&T Pro League: ttproleague.com

Tobago is served by two superb 18-hole golf courses. Tobago Plantations Golf and Country Club, established on a former sugar cane estate, is a par-72, 7,005-yard course benefiting from stunning ocean views. It is links in character, with three holes bordering the Atlantic Ocean and four of the front nine (the 5th through the 8th) being played alongside mangrove swamp. Facilities include a 50-bay driving range, pitching and chipping areas, putting green and pro shop. First 18-hole tee-off at 7am and last at 4pm. Non-residents cost 18 holes: US$95 and nine holes: US$60. T: 627-1463

Mount Irvine Bay Resort, voted the Caribbean Golf Resort of 1994, is set amidst an old sugar and coconut plantation overlooking the ocean. The 127-acre, 6,793-yard, championship-standard course rises in natural terraces from the coast offering intermittent views of the sparkling Caribbean Sea between lush bamboo and abundant coconut trees. Open daily at 6.30am. Last 18-hole tee-off 4pm. Cost 18 holes: $US 55.20 and nine holes: $US 34.50. T: 639-8872

Head for one of the larger hotels—most have well-equipped gyms.

Hockey is played at weekends on the grass training field at the Dwight Yorke Stadium during the outdoor season (March to August). Tobago’s only club, Paradise Hockey Club, runs male and female sides and youth teams. Trinidad & Tobago Hockey Board, tthb.tstt.net.tt

You can enjoy horseback riding on some beaches, including Stonehaven, Grand Courland and Canoe Bays. Additionally, there are woodland trails on the lower half of the island to explore. Most hotels can organise trips and there is an office at Canoe Bay. Trinidad & Tobago Equestrian Association: ttea.4t.com, tteasecretarygeneral@yahoo.com or Healing & Being With Horses.

The Tobago Sea Kayak Experience at Man o’ War Bay offers kayak tours of the island, and instruction for both novices and more experienced kayakers. Kayaks can be rented at some beaches, and beach hotels like Grafton Bay Resort and Le Grand Courlan have kayaks and other watersport equipment for their guests.

Mountain Bike Magazine says Tobago is the “mountain biker’s island paradise.” Tobago provides some great terrain for mountain bikers of all levels, from breathtaking downhills to easy-coast cruises. Explore coastal tracks, rainforest rides through the Main Ridge Forest Reserve, isolated beaches and remote villages, and feel like you’ve earned that evening cocktail. The Main Ridge Forest Reserve trails offer magnificent views and secluded beaches inaccessible by car. The tropical climate allows year-round cycling, though muddy trails can be hazardous in the wet season. Cost: US$40-50 for rides up to four hours. NB: No map of the trails has been produced, so ride with a guide if you want to find the best (and safest) routes. Tobago Mountain Bike Tours: www.tobagomountainbike.com •  Mountain Biking Tobago: www.mountainbikingtobago.com

Another sporting calendar perennial is The Carib Great Race. First held in 1969, and held annually in August, it sees powerboats vie for supremacy on a route of 115 miles (two to three hours), from the Port of Spain Waterfront in Trinidad to Scarborough, Tobago. Cheering crowds welcome the boats at race-end and, unsurpisingly, a party follows. Trinidad & Tobago Powerboat Association, E: ttpba@gmail.com, W: ttpba.net

The dry season (December to May) is the best time for sailing, as winds are stronger and more consistent. Most of the north coast bays offer good daytime anchorage, but only professional captains should attempt the windward side. The Tobago Carnival Regatta (formerly Angostura Sail Week) is a popular annual event, not only for the sailing but for the partying which accompanies it. It used to be hosted each May, but has been moved to earlier in the season around T&T Carnival. The international regatta provides racing for varying levels from the highest racing class, to racer cruiser, cruiser and finally charter class. There are also tour operators who operate sightseeing sail boat tours, and diving trips. Trinidad & Tobago Sailing Association: 634-4519, ttsailing.org • Island Girl Sail Charters: sailtobago.com

Many pelagic species, such as blue marlin, sailfish, tuna, wahoo and dorado, patrol Tobago’s reef and shelf drop-offs, with Charlotteville’s waters particularly productive. There is also inshore, river, mudflats and fly-fishing to be enjoyed. The key offshore game fishing seasons are: October–April for marlin, sailfish, wahoo, tuna and dorado; and May–September for barracuda, kingfish, bonito, and snapper. “Nothing compares to the adrenaline rush you get pulling [a marlin] up,” says Sid Johnson, secretary of the Trinidad & Tobago Game Fishing Association (TTGFA). “We get a lot of them in the November to April period, which is why we have our big game fishing tournaments in March and April.” There are two major tournaments, the Tobago International Game Fishing Tournament, at Charlotteville (tgft.com) and The Trinidad & Tobago Game Fishing Association Tournament, at Speyside (W: ttgfa.com, T: 624-5304 / 632-6608, E: info@ttgfa.com). There have been record catches in the last two years, with a junior world record 890lb Blue Marlin caught in the 2008 TTGFA tournament. Conservation is important, so competitions and charters use the tag-and-release system. An 8-hour trip costs around US$500.

While the waves in Tobago are less powerful than those in Barbados or Puerto Rico, they can be perfectly shaped. The season lasts from November to March, but surfers always keep a keen eye on the sea during hurricane season. Mt Irvine and Bacolet are major surfing spots, with Mt Irvine’s swells tending to come consistently around Easter. Surfing lessons and board rentals are available at Mt Irvine Bay. In November 2014, the Trinidad & Tobago Surfing Association (surftt.org) held the Tobago Pro Open event at Mt Irvine.

Several hotels have their own tennis facilities and will provide racquets and balls. If yours doesn’t have a court, there are public courts at Store Bay. There are also facilities in Arnos Vale Hotel, La Grand Courlan, and Turtle Beach Hotel. Grafton Beach Hotel also has squash facilities. Play in the early morning or late afternoon to avoid the scorching midday sun. Tobago Tennis Association, T: 769-0218, E: tobagotennis@hotmail.com

If you’re arriving in Tobago by yacht, check in with customs and immigration in Scarborough or Charlotteville, the two official ports of entry. There are no official anchorage sites, but Mt. Irvine Bay, Grafton Beach, Store Bay and Englishman’s Bay are all popular locations. On the southeast coast, Anse Bateau is a good anchorage and fuelling point.