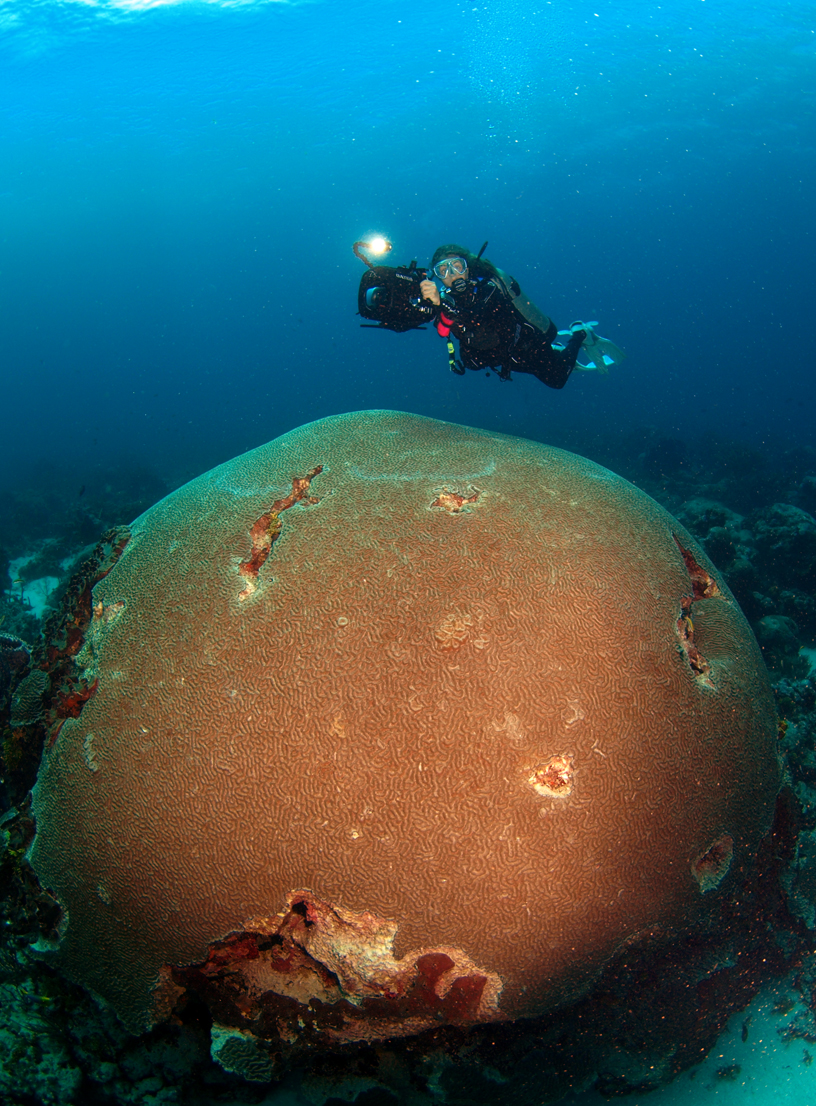 A diver hovers above what is often referred to as the largest brain coral in the world, off Speyside. Photographer: Sport Diver Magazine, via the THA

The reefs are alive! And the millions of creatures on them make scuba diving off Tobago’s coast a psychedelic trip. If you think the corals and creatures in Finding Nemo were stunning, wait till you see the reefs off Tobago. The names alone are colourful enough: Obeah Man Point, Shark Bank, Scotch on Rocks, Gin and Tonic, Japanese Gardens, London Bridge, Lucifer’s Bay, Ketchup Reef, Snap, Crackle, Pop!

Take a deep breath, breathe out slowly, look around. Fish everywhere: silver, black, yellow, blue. Big ones, tiny ones, listen to the crackling of the rock shrimp. Turtle! Look, a hawksbill! So majestic! Check under that rock, it’s a nurse shark. Amazing! Wait, there’s a lobster, its massive feelers waving in the current. Is that a stingray covering itself with sand? It’s huge! There’s another one. Turtle! This one is a green turtle, you can tell from the mouth.

Diving in Tobago is a sensory trip. There is so much going on, vistas of beautiful fish and coral, usually excellent visibility; manta, eagle and sting rays are perennial attractions, as well as hammerhead, nurse and black-tipped reef sharks; hawksbill, green and leatherback turtles; moray eels; barracuda; dolphin; and pelagic species such as marlin. With really friendly and helpful dive operators like Marcus from Extra Divers in Crown Point (extradivers@tstt.net.tt), you are sure to enjoy your dives.

Where and when in Tobago to dive?

Tobago’s waters are so rich with nutrients, millions of marine creatures live off the plankton and polyps on the reefs, while others, like sharks and turtles, pass through at certain times of the year.

Shoals of blue wrasses, damselfish, blue chromis and gaudy parrotfish are the most prevalent on all the reefs, along with spotfin butterflyfish, trumpet fish and angelfish. The corals are almost as varied and interesting, and include the feared fire coral, as well as the fan, tube, brain, great star and elkhorn corals. Many corals are colourful themselves, ranging from red through orange to white. Poised purposefully between the corals are sea whips, fans, molluscs, sea urchins, anemones, sponges and sea weeds.

The rich waters are also the reason for the massive size of some of the hard corals, like the giant brain coral off Speyside, which is more than six metres wide. Huge barrel sponges also sprout in the Columbus Passage south of Tobago.

The sea grass itself is also home to the tiniest of creatures, now the subject of research, including seahorses, often found hooked onto the base of sea rods or plumes close to a sandy bed. And that’s just the small fry. The big boys of the blue include sharks, turtles, rays and eels.

Between December and May in the Speyside region, whale sharks are often seen on early morning dives. Other species, such as tiger, bull, nurse, reef, blacktip, hammerhead and lemon sharks, have also been spotted.

The stingray also comes in different varieties: southern, roughtail, lesser electric ray, spotted eagle ray (with a tail three times as long as its head), and the biggest of them all, the manta ray. Your best chance to swim with a manta is an early morning dive off Speyside in Black Jack Hole.

The big fish off Tobago feed on the infinite shoals of small fry, and these include jacks, barracuda, wahoo, tarpon and tuna.

There is good diving to be had everywhere around the coasts, with over 60 established dive sites (mainly around the northern tip) — shallow reef dives, deep diving, wreck diving, drift diving. Most dive operators offer introductory courses; there is a decompression chamber at Roxborough Medical Facility, 20 minutes’ drive from Speyside.

The wreck of the Maverick, which was sunk in 1997 off Mt Irvine, offers close encounters with large barracuda and giant jewfish. The Sisters (on the Caribbean coast) consist of a cluster of rock pinnacles that breaks the surface and drops to a mind-boggling depth of 140 feet. Strictly for advanced divers, please. This area is home of a residential population of hammerhead sharks.

Other sites for expert divers include Flying Manta, London Bridge, Diver’s Dream and Diver’s Thirst. The conflicting currents in these areas create a playground for mantas, barracuda and tarpon.

Drift Diving in the Columbus Passage

The Columbus Passage is one of the top drift-diving locations in the Caribbean. Here the sites have strong currents that flow in a westerly direction. This constant water movement sculpts sea fans and giant barrel sponges into unusual shapes. Turtles, eagle rays and reef sharks are usually seen on these dives.

Still a well-kept secret tucked away off the northeast coast, Little Tobago’s rugged cliffs surf are home to colonies of breeding boobies, terns, frigate birds and red-billed tropic birds. You can stand on a ledge and watch the never-ending aerial drama between red-tailed tropic birds and boobies.

Of course when you enter their world, there’s always the risk of getting on the wrong side of some creatures. The usual suspects in cases of injury are poisonous sponges, jellyfish, Portuguese man-o-war, puffer fish, fire coral, bristle worms, stingrays, sharks, moray eels, sea urchins, scorpion fish and barracudas. As you may already know, the best way to deal with any injury is to wash the wound with saltwater (not fresh water); apply vinegar and cortisone cream. Once you employ a professional dive operator, they should be able to provide the required treatment and medical attention.

www.mytobago.info rates all the dive operators on the island.

It takes a lot to conquer an instinctive fear of the ocean. Top of the list is a patient and reassuring instructor. The trick to scuba diving is staying calm. If you’ve ever done yoga or meditation, you have an advantage. What throws most people off is the panic attack. Control your fear and it’s as easy as breathing. In and out, through your mouth – that’s the mantra you need to focus on.

Tobago has some very good diving instructors, including former Coast Guard officers with many years of experience. You can take the Discover Scuba course, which starts with a video that explains everything, from how your ears will feel when you submerge to the technique to clear water from your mask. Most beginners do their first dive in Store Bay on a small reef about 100 feet from the shore.

Many fearful first-timers surprise themselves and go on to do their PADI certification. The PADI Scuber Diver course takes only two days and afterwards, you can dive anywhere in the world. Licensed operators offer PADI or NAUI dive training for the inexperienced, as well as equipment rental and sale for those who don’t have their own. Most dives are drift dives and the current can be fairly strong but your dive operator will know the best sites for the conditions and the divers’ relative experience. The best part is that there is usually a maximum of ten people on any dive, including the dive-master, which makes for a much more personal experience.

Frontier Divers offers specialty courses in deep-sea diving, diving on wrecks, underwater navigation, and night dives. With 60+ dive spots around Tobago, learning to scuba is the key to opening the door to a brave new world.

Out at sea, where the Orinoco flows into the Caribbean Sea, the waters teem with big fish, giants of the deep like blue marlin, white marlin, swordfish, wahoo, tuna, barracuda and mahi-mahi. They tease and torment anglers, and mesmerise divers. The charter captains in Tobago are among the best in the world. Learn more about Tobago game fishing here.