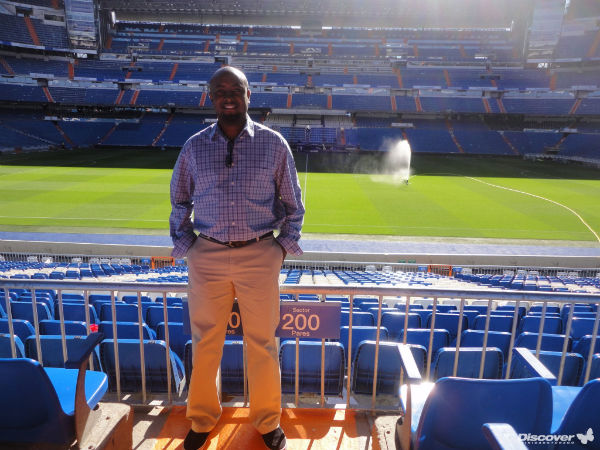 Lasana Liburd at the Estadio Santiago Bernebeu in 2012.

An Interview with Lasana Liburd of Wired868

Closing in on 20 years as a writer, Lasana Liburd was a sport and features writer for the Trinidad Express. His work has also appeared in World Soccer, Play The Game, and the UK Guardian. He is now the managing director of Wired868.com, a website that blends sport and features with political satire.

Come see for yourself. In truth, the most important sport decisions take place off the field in my opinion; so my site challenges readers to think outside the box and try to merge ideas from different walks of life.

Q: You’ve spent a long time covering sport, in Trinidad and Tobago and abroad. What are some of your best memories?

Football is my favourite sport, and for me, that unforgettable memory is definitely associated with the Germany 2006 Soca Warriors who made Trinidad and Tobago the smallest country ever to appear at a FIFA World Cup final. I was in Bahrain for a play-off match that we won 1-0 thanks to a Dennis Lawrence header. As the seconds ticked away, the hosts lost it and started ripping their seats out and tossing whatever they could at the small group of travelling fans. I got on to the field after the final whistle and it felt like being part of a special squad that had just pulled off one of those Mission Impossible assignments.

Q: The sports scene in T&T — what are three events you would encourage a visitor to watch while they are here?

For a tiny nation, Trinidad and Tobago has been lucky enough to have world-ranked athletes in several sports, so you might be pleasantly surprised if you go to an event in most fields. Personally, my favourite three are football, cricket and track and field.

If you catch a West Indies cricket match, you will witness a combination of the island’s best qualities: music, food, friendliness, flair and sportsmanship. Few sports here can draw an audience to match a cricket crowd and certainly no other sport seems to have that close bond between performers and participants.

Football fans can be more fickle and there are often just a few hundred persons in the stands for domestic games. The thrill here is observing the raw talent on show and trying to guess which player could be next one to be scooped up by a European club. The standard of the coaching is improving and so is the league. The joy here is in imagining what could be rather than what is.

The athletics community is like a small, serious family. Everyone in the stadium will sound like a coach or manager and it seems that everybody is involved in what happens on the track. Undoubtedly, a half dozen people at any big track meet will be at the Olympics in a few years. Want to fit in to this busy crowd? Just ask what athletes you should look out for and why. That is guaranteed to be a half-hour conversation.

Q: What about catching a game on TV? Any places you would recommend for that?

There is a lovely atmosphere at the Trotters sports bar, which is a trendy spot in Woodbrook [Port of Spain] where expats and locals mingle in an elegant setting with every modern convenience.

If you are willing to sacrifice service for excitement, then you won’t find a more partisan atmosphere than the Hutt Shutts Sports bar in Arouca. It is huge, crowded and loud and there are some tasty local bites too at an unbeatable price. Be sure to go early to ensure you are near to a fan and have fun.

Q: And how about sport to play? If you can only recommend one such experience to a visitor, what would you suggest they try to get involved in?

The people’s game, of course: Football!

There are about a half-dozen different small-goal matches taking place on the western side of the Queen’s Park Savannah, and I guarantee there is one for whatever your skill level might be. Most of them will let you play too. Do try to look the part if you hope to get many touches of the ball though.

Check out www.wired868.com for an in-depth, and occasionally wry, look at sport, politics and life in Trinidad and Tobago.