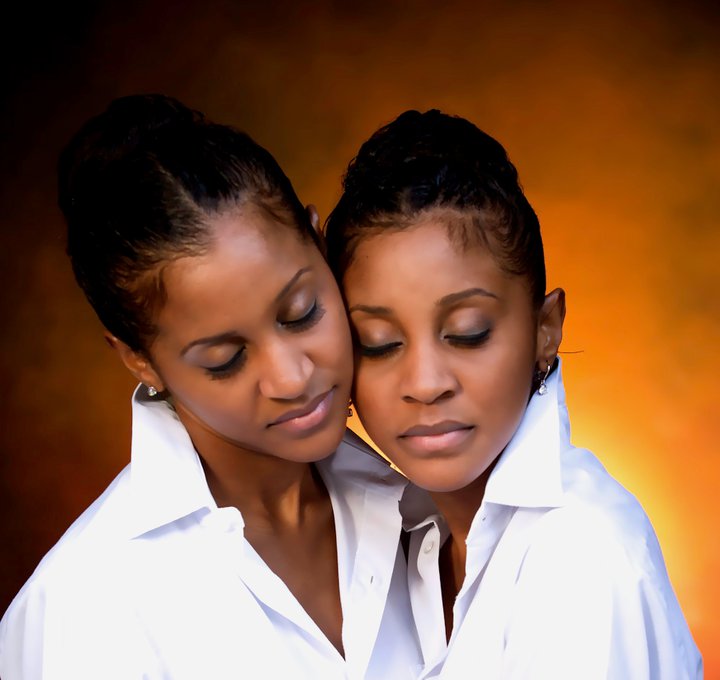 An interview with the twin designers behind K2K Alliance & Partners

Caroline: How did the Carnival band start up?

Kathy: We wanted to study art or architecture and got in to Cornell…but the scholarship was too small… So we kept applying, and got in to Howard which offered a really good scholarship … I studied business management with a minor in finance, and Karen studied international business and marketing.

Karen: Every summer we wanted to come home, but Mum kept encouraging us to broaden our horizons and explore opportunities….

Kathy: We interviewed for an internship at an investment bank, where they took just three Trinidadians, Karen and I being two … and we’re still working there. It’s been gruelling, though of course it’s a real growth experience. And that is how all this came about.

Karen: After being there for five years, we were really wondering where we were doing. I ended up in the ER. I had little to no sleep, and I passed out and thought I was having a heart attack. Kathy was in Chicago. I woke up in the hospital with an oxygen mask on.

Kathy: And every time we get homesick, we draw. Our last year at Howard, we started designing Carnival costumes…

Karen: Then all of a sudden it morphs into a whole band!

Kathy: We designed a section in Poison in 2006. I think 2010 was really our lowest point, and that was when Karen drew out the whole band.

Karen: The band was supposed to be called “Tears”! [laughs] Every step of the way has been an emotional journey, a whirlwind… When we first wrote the story for “The Waters”, our mum encouraged us to make it less negative then  Roger Roberts from 3canal read it, and encouraged us to fine-tune it. The story of “The Waters” is our story. The colours are bold and we didn’t mix and match a lot of shades or colours.

Working on the band has been therapeutic for Kathy and I. We documented how we were feeling, what we were going through, and then now we’re at a point, what we call in the band “Saraswati”. We don’t really like to be out there… If the band could have been out there on its own without people knowing who we were, we would have been happy with that!

Kathy: We’ve been working with some amazing people through the process. For example Geraldo Vieira,  Ernesto Jardine and Ann-Marie Akeung   for the headpieces. When you hear Mr. Vieira’s  stories and  the wealth of knowledge that he has… It’s phenomenal. I don’t think we celebrate the talent and people we have on the island until they’re gone. But one thing this process has taught us is how many people it takes to make a band come to fruition. You might see a face or two, maybe the designers or the band leaders… but outside of that, there are all these people that make it possible. When we started, Roger asked whether we really wanted to do this – the hard work, the politics… but it’s been such a journey, starting from the story, to the production, to trying to understand the Trinidadian work ethic…!

Kathy: And we want to be our own image! With K2K, we call it a kind of hybrid, mixing fashion with mas, present with traditional. People say the band has a Peter Minshall finesse, and to be honest I’m honoured. Our mum found a book we did for Form 5 on Peter Minshall. It brought tears to my eyes last night, because we said we hope to be true geniuses like Peter Minshall, and to find ourselves. And we’re actually trying to make that statement now.

Caroline: So what happened after you designed the band?

Kathy: In 2010, Karen started drawing the band, and no one saw the designs for a whole year. Only in 2011, we put a package together, with a K2K T-shirt, a beer mug, and a thank-you note – and “please open” on the top! We made seven boxes. Three went to 3canal. One was for Allyson Hennessy, another for her sister Roses Hezekiah, and one for Noble Douglas. 3canal’s went first. We were about to send out Allyson’s and Roses’, but that’s when Allyson got sick. Then we shipped out Noble’s. We ended up getting Roger on the phone after calling a few times, and the conversation went from there. Allyson’s and Roses’ boxes are still sitting in our apartment, since they never went out. We got a lovely email from Noble, but because she brings out her own band she wouldn’t have had the time to work with. So we were still looking for a choreographer, and our friend Jamie Lee Loy put us on to Dave Williams. We gave him creative license, and what he wrote for the opening at Sauté Trinbago was really nice.

Now, every time we try to do a mini presentation – it rains! It was pouring buckets a drop at Sauté Trinbago, and on the Carlton Savannah rooftop for our Monday launch with Tao Sushi. Anyway, we wanted to do a small launch, and originally wanted to work with the Ministry and do it at NAPA. With the curfew, it was a huge rush to get everything ready… We nearly didn’t even go on! I was so tired. The whole production team was tired. And I hadn’t even seen the whole presentation until they went on stage. Cecilia Salazar actually did the opening. She was like the oracle, and did Dave’s poem.

Caroline: What have been some of your design influences?

Karen: We did a lot of research on [Minshall’s] presentation at the Olympics.

Kathy: In terms the headpieces, Ernesto Jardine and Jerry Valentine have been really important. So we’ve been going to old masters for the traditional aspect, and our real forte is the clothing. If you look at the costumes and the leggings with the ladies’ legs together, each costume is actually like a gown. French and Italian designers have really impacted our fashion sense.

Karen: Especially Roberto Cavalli… The thing with him, which wasn’t seen so much this year, was that his mother was a seamstress. He’s focussed a lot on photography and bringing photography to the clothes, so he does a lot of screen printing. There’s a whole segment where he did shots underwater and transposed all these coral shots on to cloth. One season, everything was so fluid and looked like water… So even though we haven’t studied fashion, we enjoy fashion and like to draw things… and Mum has been great in telling us what doesn’t make practical sense!

Kathy: And Dad imports textiles so he’s helped, especially with the Monday wear. We wanted something light, but also cost effective. We actually had two designs.

Karen: T here were two designs for the Monday wear. We showed one of them to Wendell and Roger, and we were really excited about the first one. But we’re going to have to re-engineer it for another year, because the design was just so sick! We wanted the Monday wear to be something they can use after, and a kind of gift to our masqueraders, from us to them. But our favourite design was too expensive, so we went with the design that we launched in December. It’s been a real learning experience in terms of our thought process.

Kathy: Yeah, because we thought, great let’s blend mas with fashion, or art with business… We built the financial model, did the math, and now are putting the math into practice… And it’s totally different! We’ve gotten a lot of positive feedback, but you can’t help but crouch with anything negative. So it’s been a real learning curve for the whole family. We’ve been dragging along poor “Poopsie Head” [our mother], who win or lose has been there with us. Karen and I would like to take back our idea of Carnival to the international forum.

Karen: We want to do the opening of the Olympic Games in Paris. [laughs]

Karen: Crazy. This year, we’ve been testing what the market would like. The favourite sections have still been kind of “pretty mas”.

Kathy: You’d think the island is craving change… but how many people are willing to sign up for change? There are a handful of individuals who want to be part of change on the island… You’d think given how creative we are, how rich our history is with Minshall and Wayne Berkeley… People say mas now is just like Brazil, but it is not like Brazil!  Their Carnival is so much richer than what we have right now.

Karen: They have, like, five women in the bikinis. It is theatre in the streets at night.

Kathy: There are a handful of “bikini and beads”. And the rest of the band, is a well-clad, glamorous part of a theatrical presentation! The floats are massive. You can’t even get into the parade without going to the samba school. What we are doing is not Brazil. We are losing the creativity that we had. I don’t see anything wrong with bikini and beads, but my problem is everyone is doing the same thing.

Karen: It’s a completely different mindset. And we’re not trying to be a Peter Minshall or a Wayne Berkeley… because we don’t think anyone can. From my perspective, he was an artist and a revolutionary thinker. He thought outside the box. He made young children then dream, dream about what they could do and invent. We would never be a Peter Minshall. But we’re hoping to use his creativity and catapult us further. For 2012, we want to be band of the year!