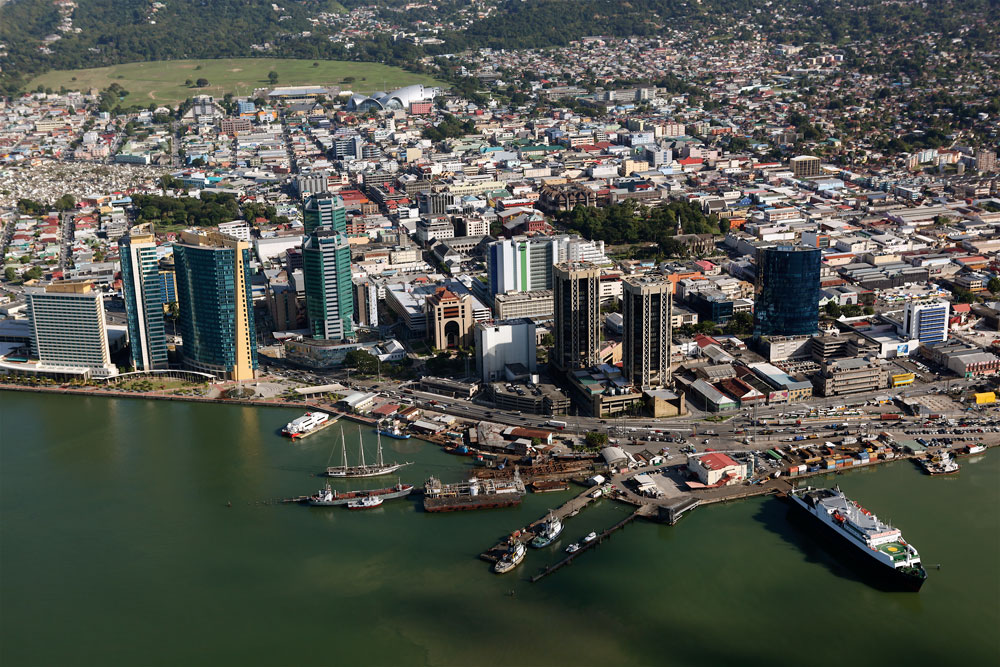 A walk around the capital, Port of Spain

Port of Spain, the capital of Trinidad and Tobago, sprawls from the Gulf of Paria back into the foothills of the rugged Northern Range. When it became the capital in 1757, it was a muddy little seaport. Now, it is one of the busiest commercial centres in the Caribbean, and a hotbed of entrepreneurial and artistic activity as well.

Once a simple Amerindian settlement set in mangrove swampland, downtown Port of Spain is now home to the largest banks in the English-speaking Caribbean; it is a major regional shipping hub, handling exports such as agricultural produce and asphalt. The whole waterfront area is being redeveloped, which will give the city a new and sophisticated (though perhaps uniquitous) face. The heart of the city is the downtown area, with the Queen’s Park Savannah at the northern edge and the Brian Lara Promenade to the south, linked by Frederick Street.

The best way to get a feel for the city is on foot: wander through the hustle and bustle of early-morning vendors, shop for handmade leather goods or fabrics of every conceivable type, for fruit and vegetables, cheap CDs, cassette tapes and souvenirs. When your feet protest, the Promenade is a pleasant place to sit and survey the scene. You might even find yourself drawn into an impromptu game of outdoor chess.

Options for recreation during the day and night are endless: casinos, nightclubs, art galleries and museums, dance recitals, music, theatre, parks and other places of interest to visit. Here’s also an interesting documentary short about our capital city:

Port of Spain is a city in transition. It has always had vitality, but much of its fabric has seen better days. An oil boom in the first decade of the 2000s led to major construction and refurbishment projects, particularly along the waterfront.

Port of Spain’s main boulevard is Independence Square, down the middle of which runs the Brian Lara Promenade, named after Trinidad’s record-breaking cricketer. There’s free entertainment somewhere along the promenade almost every week; there are chess boards under the trees.

At the western end of the promenade, the former government’s most ambitious construction project is the International Waterfront Centre, with a 22-storey Hyatt Regency hotel, a large conference centre, theatre space, shopping, and a waterfront park. Across the road a new Government Campus Plaza. The western half of the promenade is the “smart” end, with financial buildings and the government’s Twin Towers, which house the finance ministry and the central bank. Halfway down the promenade, in the middle of a roundabout, a solemn gentleman watches the scene from his plinth. He is Captain AA Cipriani, one of the great figures of the pre-independence movement, and a one-time mayor.

The promenade comes to an abrupt end here. The Cathedral, which has been undergoing restoration works, has some attractive stained-glass windows depicting Trinidad’s history. To the north are the streets which formed the original eighteenth-century Spanish town. Beyond the cathedral, another reconstruction project is under way to redevelop east Port of Spain.

A block to the south, on South Quay, City Gate is the public transport hub which handles many of the city’s 350,000 daily commuters. A short distance to the west is the Museum of Port of Spain and the abandoned cannon of Fort St. Andres the main defensive position of the Spanish town before it was seized by the British in 1797. The battery was some way offshore then, but land reclamation has changed all that.

Heading north (toward the Savannah)

From the museum, head north up Broadway past Captain Cipriani and on into Frederick Street, the city’s main shopping strip (in addition to Charlotte Street, and Queen Street). It’s not the most extensive or upscale in the world, but there’s plenty going on in the stores and around the street vendors and mini-malls that crowd both sides. To the east, several blocks form the city’s “cloth district”.

Soon you come to Woodford Square, laid out by a civic-minded British colonial governor in the early nineteenth century. It has a long history of political meetings, religious crusades, orators and cultural events: the country’s first prime minister, Dr Eric Williams, called it “the University of Woodford Square”. The square is surrounded by imposing buildings. On the south, the neo-Gothic Anglican Cathedral of the Holy Trinity (1823), with its hammerbeam roof made of local wood; on the northern side, the stern concrete presence of the Hall of Justice; on the west, the new National Library and the Red House (currently under restoration works), where the national parliament usually meets; and the remains of Greyfriars Church.

Bordered by Abercromby and St. Vincent Streets, The Red House is the rebuilt version of the original structure, which was burnt down in 1903 during protests over water rates. Parliament typically meets in the northern wing, in a chamber of Wedgwood blue and white gesso. However, it is currently being restored and Parliament sittings have temporarily been relocated to a tower of the International Waterfront Centre. [as in January 2018]

On Frederick Street just a few minutes from the southern end of the Savannah, displays the city’s colonial and recent past, and has a permanent exhibition concerning the La Borde family, the first Trinidadians to circumnavigate the globe in their small yacht Hummingbird (1969-1973). They made another journey (1984-1986) in Hummingbird II, which now lies next to the museum. Open Tuesday to Friday, 9am to 5pm, admission free.

At the corner of Hart and Abercromby Streets, has a large West Indian collection and heritage library, as well as its own amphitheatre and cinema. Registered visitors can borrow two books per visit.

Museum of the Trinidad and Tobago Police Service:

Behind the Red House, it has a permanent exhibition in the old police headquarters, depicting the history of the service from colonial days. Open Tuesday, Thursday and Saturday, 10am to 3pm.