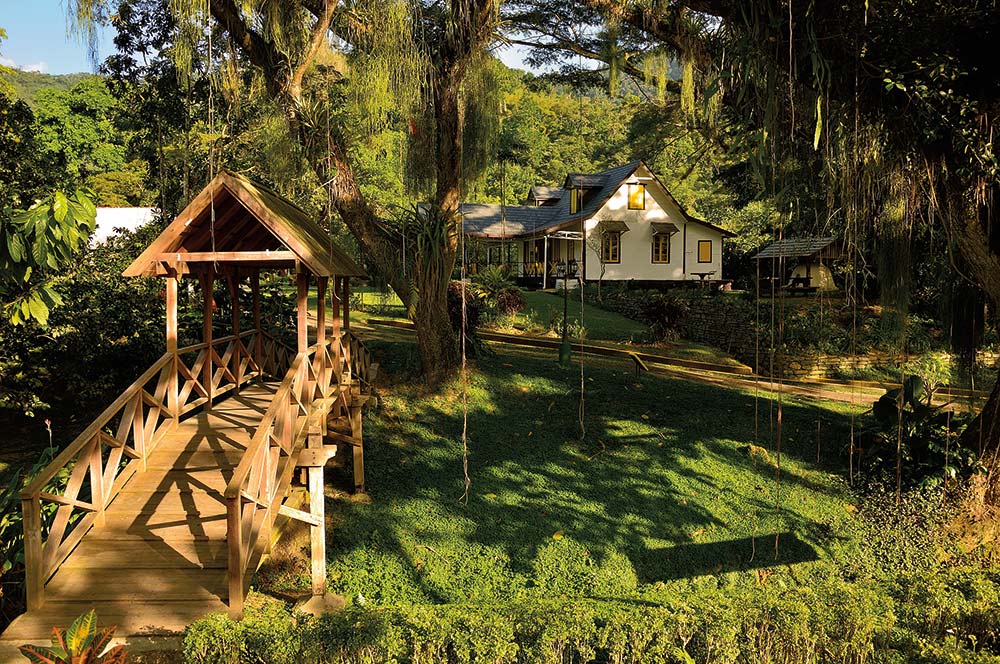 North Trinidad is dominated by the mountains of the Northern Range. This includes Trinidad’s highest mountain, El Cerro del Aripo, and its oldest rock formations. The northern slopes meet the Caribbean Sea, and the southern slopes end in the Caroni plains.

To the south of the mountains, a series of busy communities lines the Eastern Main Road (EMR) and the faster-flowing Churchill Roosevelt Highway which runs parallel to it; both end just east of Arima and give way to minor roads that span the north east coast.

The EMR is the busiest of the three routes that take travellers from the north west to the north east of the island, and offers the best access to some of the attractions of the Northern Range foothills such as Trinidad’s first capital, St. Joseph, and the valley communities of Lopinot and Caura.

The largest town in this region is Arima, home of the country’s only horse racing track and the Carib Santa Rosa Festival. The Priority Bus Route is the closest you get to an express commuter thoroughfare, dominated by red band maxi taxis and buses.

The country’s best beaches can be found on the rugged north coast. Though parts of the north are well served by public transport, you should use a car if you’re going to explore the more remote north coast.

Discover the North Coast: Port of Spain to Blanchisseuse

Leave the Savannah at its northwest corner. Opposite a KFC outlet, turn right onto Saddle Road.

On the left past the gas station, the Maraval valley climbs into the Northern Range and a road winds up to the unique hillside village of Paramin and its terraced gardens of parsley, chives, tomatoes and chadon beni. Blue paint, dye, horns and pitchforks make devils out of men, women and children during the Blue Devil competition on Carnival Monday evening. It is famous for the Paramin Parang Festival which has superseded more sedate French Les Rois songs. Harvests, Creole masses and Christmas are highlights of the church season. The ridge beyond the village itself provides panoramic views. Some tour operators offer tours through the village and all the way down to Maracas Bay.

The scenic North Coast Road, built by American troops during World War II, soon branches off to the left, crossing the hills and then hugging the steep north coast high above the sea. As it begins to descend, a lookout provides a view of the rugged coastline. Overlooking La Vache Bay, this lookout provides fabulous views east and west, with coconut and fruit vendors aplenty. You can pick up snacks here, and you risk being serenaded by a local calypsonian.

The first beach you encounter as the North Coast Road descends to the sea, and Trinidad’s most popular beach. Waves are usually less than 1 metre, though the water can get choppy. It is about 35 minutes from Port of Spain. Facilities include a large car park, tables, benches, changing rooms with showers, toilets and lockers. Red flags indicate unsafe bathing areas; lifeguards are on duty daily from 10am to 6pm. Vendors provide authentic local food, including the Maracas staple, bake-and-shark*. There is a hotel near the beach, if you want to stay overnight.

* If you can, opt for the most sustainably produced fish, or a vegetarian option – some fish stocks are dangerously low in our local waters, and the balance of our eco-system at risk as a result

Trinidad’s second highest peak looms on the right between Maracas and Las Cuevas. The hike to El Tucuche’s summit usually starts in the Maracas St. Joseph valley on the south side of the peak. Go with a guide.

Just beyond Maracas, Tyrico Bay offers good sea- and sun-bathing, with waves of less than a metre. It is popular for overnight camping. A lifeguard service is provided from 11 am to 5 pm daily, and there are portable toilets and parking.

Approximately 8km east of Tyrico and 15 minutes from Maracas is the popular Las Cuevas beach. Las Cuevas, “the caves”, is more sheltered than Maracas and therefore calmer. A snack bar, car park, tables, benches, and changing rooms with showers and toilets are provided, with lifeguard services from 10am to 6pm daily. (Take insect repellent: “invisible” sand flies, especially in the rainy season.)

Further along the North Coast Road, it takes its name from the French for “washerwoman”. Indeed, wherever the main road crosses the Yarra River as it meanders through the Northern Range to the sea, village women may be seen, using the river as their main source of washing water. But after a stay in Blanchisseuse village – strung out along many miles of coastal road that eventually turns south into the cool, thickly forested hills – it becomes obvious that the blanchisseuse must be the white spume and swirling foam that constantly surges over rock and beach as the Atlantic washes landward. This is a particularly wild and rugged area of coast, where fishermen learn to manoeuvre their tiny craft between rocks and reefs, and to carry their boats and engines up steep cliffs to the main road overhead. The village – called upper, lower and middle – is strung along the rugged coastline from Yarra to Marianne, interspersed with streams, coves and rocky headlands. It has become a popular weekend getaway and starting point for hikes, with several holiday/weekend homes, guest houses, self-catering apartments and a resort hotel provide accommodation. Three main beaches nestle at the foot of the rain forest, including the weekend favourite L’Anse Mitan opposite a small resort offering lunches. Marianne Bay, where the road begins to fizzle out beside the Marianne River, is the largest and most popular beach, with a freshwater lagoon at its eastern end; there is some kayaking here. Fresh fish is brought in daily by open pirogues plying the north-east waters.

About five miles from Blanchisseuse, via a dirt road bordered by pommerac and padoux trees. A ten-minute walk takes you to the river, which is wide and safe; the waterfall and its small deep plunge pool is about fifteen minutes upstream.

The coastline west of Blanchisseuse is a popular playground for north Trinidadians: the beaches of Maracas and Las Cuevas are within easy reach of Port of Spain, and “liming” on them is virtually a national pastime, particularly on weekends. But only the most enterprising tour operators, hunters and hiking groups have explored the forests east of Blanchisseuse, pressing toward Paria where waterfalls, rocky pools and a pristine beach make even the arduous day’s hike endurable. Leave the paved road at Blanchisseuse, and follow the forested coastal trail to Paria, a twisting route of some 6km, which takes about 2–3 hours each way. Allow a day to relax at Paria’s deserted beach, river and waterfall. Petit Tacaribe, beyond Paria, is a small eco-resort of bamboo and cedar cabanas overlooking a bay where leatherback turtles nest. Consult tour operators and eco-guides for more information about hikes, accommodation and ocean kayaking.

Beyond Paria, another beach at a river’s mouth, is frequented by campers who get there either by boat from Blanchisseuse, or on foot from Matelot, further east. Matelot, a village that survives by fishing and subsistence agriculture, and by the insularity of being a long way from any commercial centre, lies on the Shark River. Most recently, the enterprising Kayak Company has introduced wilderness tours for the fit and adventurous: Trinidad’s north coast by kayak. Those wishing to brave the Atlantic breakers – as the Amerindian residents must have done – in one- or two-man kayaks must first submit to kayak training in the surf. This is also prime surfing territory, incidentally; when the waves are rolling in, the main surfing beaches metamorphose into temporary campsites.

An interesting (but sometime precarious) way back to town is to take the winding road over the Northern Range from Blanchisseuse to Arima. This scenic route starts in the middle of the village and runs along the Arima River past the Avocat Waterfall. Then the road climbs through the rainforest, negotiating streams and rivers and steep cliffs. Take extra caution when driving this road. Before the summit at Morne Bleu there is a turn-off to the village of Brasso Seco. From here, a number of trails lead to caves, waterfalls and north coast beaches. Experienced guides from the Brasso Seco Tourism Action Committee take visitors into the Northern Range. This mountain village off the road clustered around a church, school, recreation club and converted cocoa houses. Famous for parang music, cocoa and coffee. There are three large known cave systems in the Northern Range. Only a few tour companies offer these tours; some of the caves have never been fully explored. The hills around Caura, Lopinot and Brasso Seco all contain caves, and the Aripo caves and the Oropouche Cavern (also known as the Cumaca Caves) are popular hiking destinations with colonies of oilbirds as an added attraction. Warning: Do not explore caves and waterways during the rainy season. And take a guide—it is easy to get lost, and much harder to be found.

On the other side of the hills, as the Arima-Blanchisseuse Road descends through the Arima valley, this is birdwatchers’ paradise, and a conservation and study centre for professional and amateur naturalists. The original estate was purchased by Dr. Newcome Wright and his Icelandic wife Asa in 1947, and has since become a conservation and research centre with an international reputation. The century-old great house has been preserved, and houses a dining hall and an open verandah for observation, especially of birds. Dunston Cave is the most easily accessible place to see nocturnal oilbirds. The Arima River flows through the property, and there are various trails with guided tours. Guests stay in the main house or small cottages. Open daily from 9am to 5pm. Admission TT$60 (under 12, TT$36); local residents TT$30 (under 12 TT$10). T: 667-4655, W: www.asawright.org.

Nearing Arima, the Arima-Blanchisseuse road forks – the right fork leads into the town and the left bypasses it to join the Churchill-Roosevelt Highway direct. Arima is the home of the last community of Amerindian descendants in Trinidad, headed by the Carib Queen. The Carib Community Centre is run by the chief and arranges lectures, workshops and indigenous products for sale (Paul Mitchell Street, T: 667-0210). The community, now largely Roman Catholic, marks the feast of Santa Rosa with a special mass and a parade through Arima led by the Carib Queen (August 31). Traditional smoke ceremonies are still held, e.g. at Hyarima’s statue on October 14 for the Amerindian Day of Recognition. This annual Santa Rosa festival in August features native craft, food and customs.

The Cleaver Woods Recreation Centre just west of Arima also has a display of Amerindian crafts and artefacts. Arima’s main landmark is the Arima Dial, a clock tower erected at the end of the nineteenth century (originally powered by steam). Arima also hosts Trinidad’s only race track, at Santa Rosa Park (www.santarosapark.com). Borough Day (August 1) brings a carnival-style parade onto the Arima streets.

From Arima, return to Port of Spain via the Churchill-Roosevelt Highway. Driving from Arima to Sangre Grande, both of which developed as centres for the cocoa trade, you can take the road up into the Heights of Aripo view Trinidad’s two highest mountains, El Cerro del Aripo and El Tucuche.