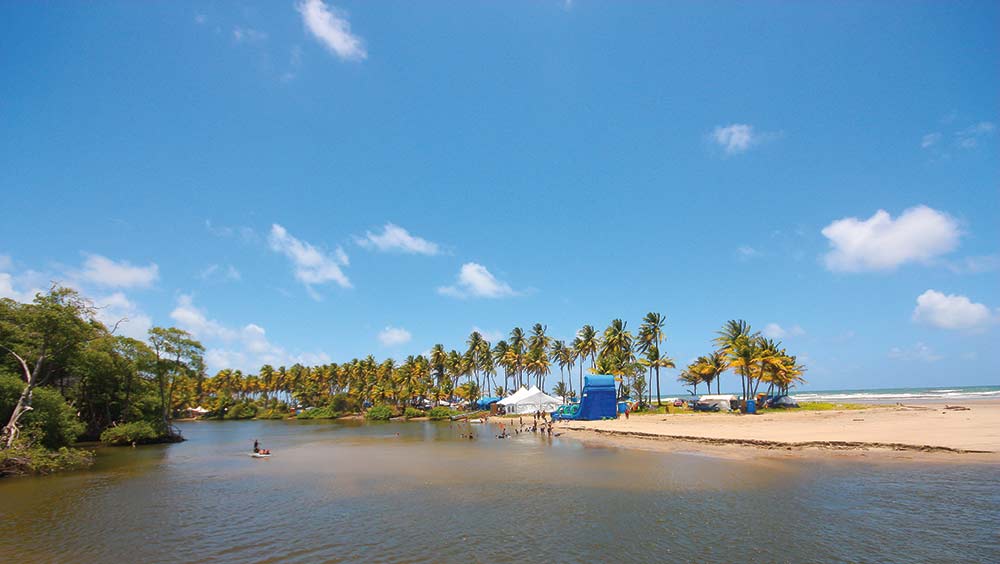 Manzanilla and Mayaro: one long, palm-fringed beach runs into the other to shape Trinidad’s east coast. Developed as coconut estates, the plantations have given this sea-coast its distinctive character.

Back in Valencia where the road divided, the right fork (the Eastern Main Road) takes you through the town of Sangre Grande (and its rather confusing one-way system. You swing left and then right to reach the town centre, ignoring the fact that you seem to be going through a taxi park).

Tip: If you fancy a different return route, turn left onto the Naparima-Mayaro Road at Mayaro village: at Rio Claro you can either head north to Sangre Grande on the Cunapo Southern Road, or to Chaguanas via Tabaquite, Flanagin Town and Longdenville (both routes cross wooded parts of the Central Range). You can also continue westwards across the island to Princes Town and San Fernando.

Shortly before you reach the coast, the Plum Mitan Road to the right takes you to the working lighthouse on Brigand Hill and spectacular views of the entire east coast. It’s open to the public.

By then you are sniffing the sea, and soon emerge at Manzanilla and its long windswept beach. Driving along with the sea on one side, the swamp on the other, it’s difficult not to feel soothed by the mesmerising pattern of rank upon serried rank of coconut palms, all bending toward the sea. This endless stretch of trees is what is called “the cocal”. Coconut is no longer a high-profile crop, but the plantations are now self-perpetuating as falling coconuts sprout and grow. In between the coconuts, small holdings produce watermelons and vegetable cash crops.

North Manzanilla is a sheltered beach watered by the L’Ebranche River. This is miles of windy and wave-washed sandy beach seen through gracefully bent coconut palms. The main road from Sangre Grande takes you to the Manzanilla beach facility (with car park, snack bar, picnic tables, and changing rooms with showers and toilets), after which the beach runs southward into the distance, the road keeping it company through mile after mile of coconut trees (the “Cocal”). Near the southern end, the Nariva River empties into the ocean. Offshore, village fishermen in typical pirogues – the Amerindian piraga was a wooden longboat made from planks – bring in catches of ocean fish which come to spawn in the marshy river mouths. Both the Manatee and the Leatherback Turtle are found off these shores. Be careful of unseen currents; the plantation is private property: take nothing, leave only footprints.

At the southern end of Manzanilla past St. Joseph Village, Mayaro is a quiet fishing village with a glorious stretch of beach named after it, perfect for long walks. Dig for chip-chip, small triangular-shaped molluscs in myriad colours; steam a pailful for soup or cocktails. Fishermen still pull in their seine nets on the beach. But Mayaro has grown from just a plantation and fishing village into an oil town. While the character of Mayaro has changed considerably since it became a commercial centre for oil workers, but it still retains the character of a fishing village and holiday haven for those who are mainly interested in its fresh sea breeze and waves rolling in as far as the eye can see. Hotel facilities as well as guest houses are available. Be careful of riptides – currents generated by wave action against a long beach. Fishing villages and busier developments can be found further south.

Beyond Mayaro (turn right then left), the road meanders on for several more miles to the southeastern tip of Trinidad. This has been oil country for over a century, and is still a major operational centre; it’s like stumbling on a large military base. Trinidad’s south-east tip is occupied by tank farms for oil companies. Beyond Galeota, Guayaguayare is another protected sandy beach on the south coast. Further south, the Ortoire and Lizard Rivers also meander through the Mayaro region toward the Atlantic. At night, the red flares of oil rigs stand out luridly against the black horizon

The road then swings around to follow the south coast for a short way before halting at the gates of the state oil company Petrotrin. Maps show a public road from here to Rio Claro in central Trinidad, but there is no access to it without prior arrangement. Petrotrin also has to give permission to enter the 16,000-acre Trinity Hills Wildlife Sanctuary & Reserve, which in consequence is little visited despite its wealth of flora, fauna, rivers, waterfalls and mud volcanoes. These hills are also reportedly what Christopher Columbus first spied before landing in Trinidad, and named both the hills (and the island) after the Catholic Holy Trinity. T: 649-5539 before 4pm Monday to Friday, or the Petrotrin switchboard at 658-4200.