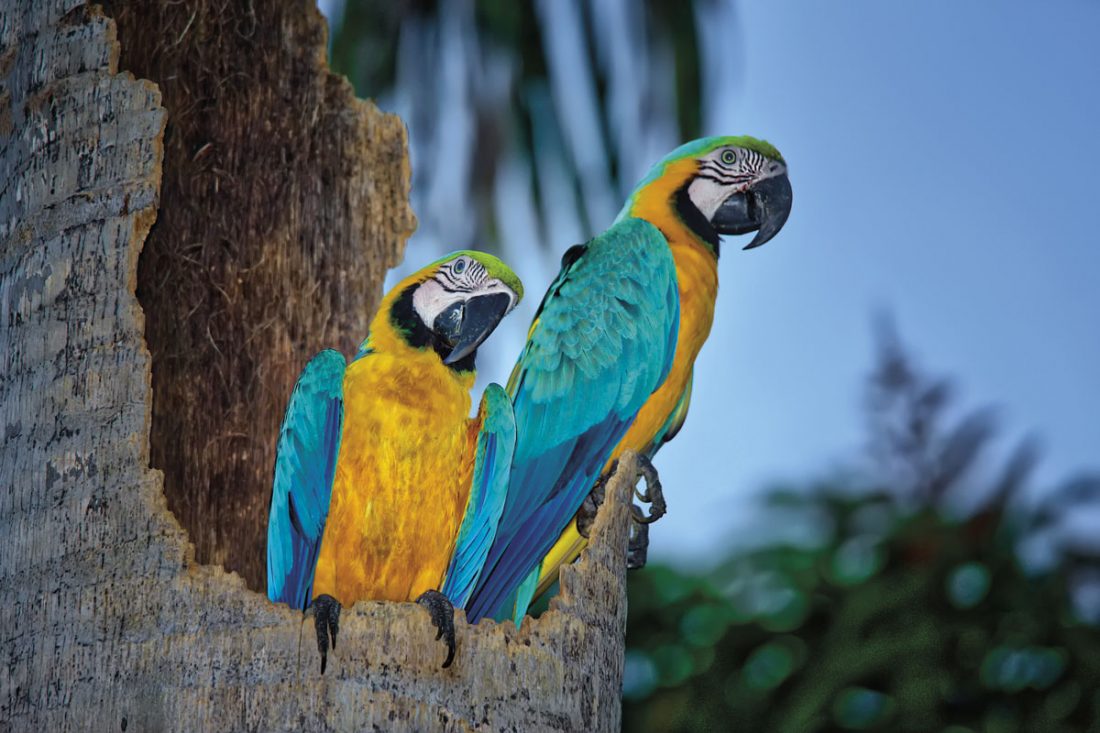 Blue and yellow macaws were successfully re-introduced to Trinidad in the early 2000s after being extirpated by habitat loss and the pet trade. Photo by Chris Anderson

The incredible biodiversity you’ll find in Trinidad makes the island extremely rewarding for bird-watchers. In fact, both islands are a paradise for birders, who come from all over the world to enjoy the spoils. 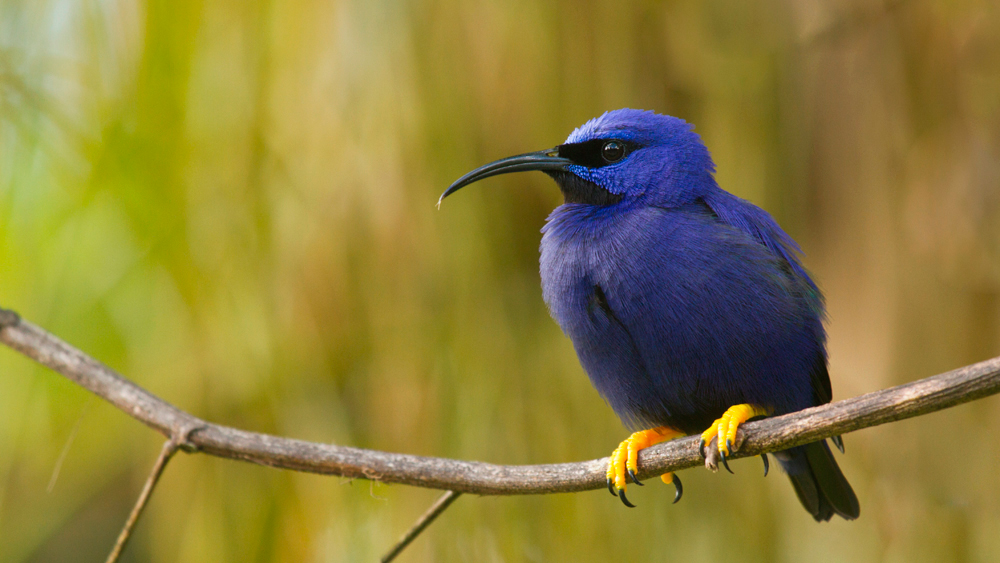 Purple reigns: Birders adore the stunning plumage of the purple honeycreeper, which often comes to perch on the porch at Yerette.

The Heights of Aripo

Three or four valleys east of the Arima–Blanchisseuse Road, leading to the highest point on the island (El Cerro del Aripo) is where you will find the blue-headed parrot, the grey-headed kite and the squirrel cuckoo, and rare visiting warblers such as the bay-breasted, black-throated blue, and blackpoll warblers. 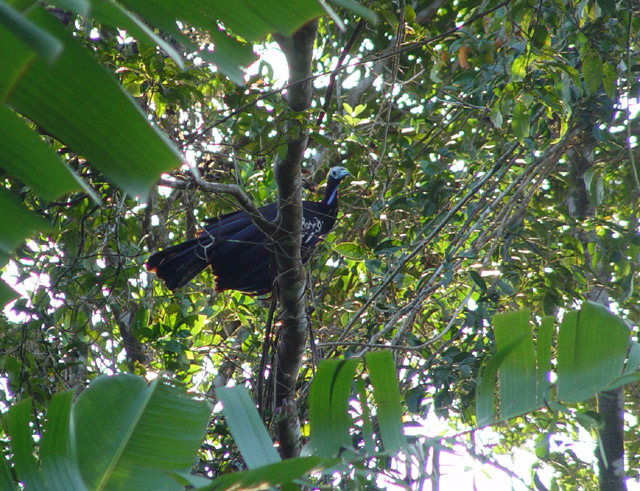 This 1,500-acre bird sanctuary in the Arima Valley is one of the first nature centres to be set up in the Caribbean, offering a chance to see dozens of hummingbirds, tanagers, honeycreepers, and bananaquits feeding up close. The main centre and guesthouse are located on a former cocoa-coffee-citrus plantation. Trails through the rainforest bring you close to all sorts of wildlife, from trapdoor spiders and woodpeckers to blue emperor (morpho) butterflies. 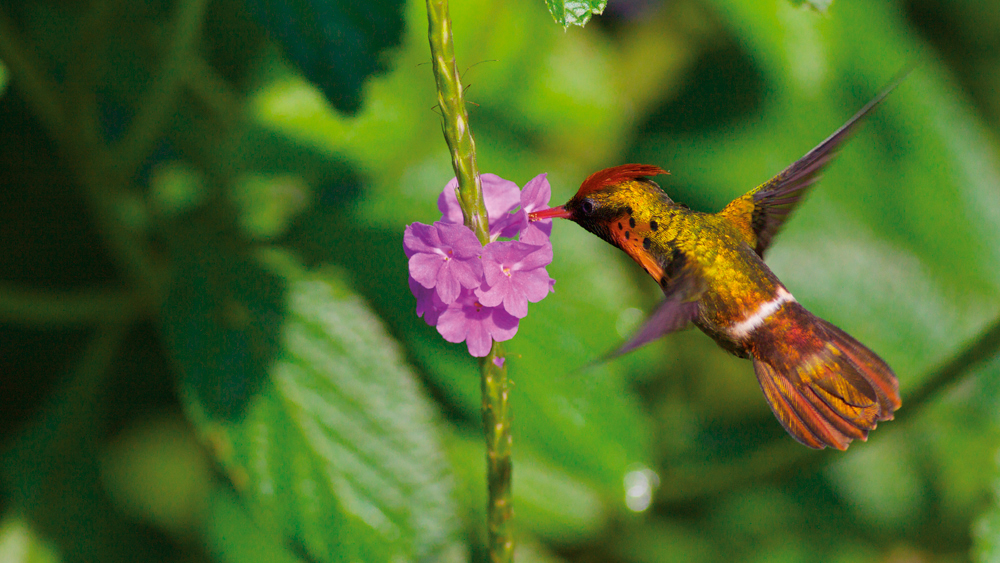 The tufted coquette hummingbird is one of the 430 species of birds found here. Courtesy Theo Ferguson of Yerette.

Yerette, Home of the Hummingbird

For a more intimate experience of the hummingbird, spend a couple of hours at the home of Theo and Gloria Ferguson in Maracas, St Joseph. Their garden has a spectacular view of the Northern Range. Sit on the porch and enjoy juices, meals and pastries for breakfast, lunch or afternoon tea alongside purple honeycreepers and hummingbirds. Dozens of hummingbirds flit by, some a few inches away, as they sip from dozens of feeders and flowers. Theo is a knowledgeable host, with a collection of photos for sale, and a slide show about the tiny acrobats. 663-2623, yerettett.com

This is an oasis of ponds surrounded by green forest, set within the sprawling grounds of an oil refinery complex. Home to rare ducks, water lilies and lotus blossoms, cormorants, caimans, parakeets and peacocks, researchers and birders can learn about efforts to re-introduce endangered wetland birds to their natural habitat. Small boats take you out on the two ponds, where you can photograph the whistling tree duck, kiskidee, purple gallinule, scarlet ibis, blue and gold macaw, wild muscovy duck, green heron, yellow-hooded blackbird, pied water tyrant, cardinal, ringed kingfisher, black skimmer, grey hawk, and the snakebird (or anhinga). A boardwalk along the first pond can be accessed by wheelchairs and baby strollers. An on-site learning centre houses a small Amerindian museum, and there is a full-service guesthouse with areas for retreats, corporate workshops and seminars. Advance bookings required. 658-4200 ext 2512, 612-2463, papwildfowltrust.org

Turn off the Manzanilla main road at Kernahan Trace and within 15 minutes be in full-on swampland, complete with capuchin and red howler monkeys, blue and gold macaws, and toucans. Bush Bush is a protected island within the largest freshwater wetland in the Caribbean, which means lots of mosquitoes in the rainy season, so repellent is a must (plus long pants and light colours). Boating and kayaking are only possible in the rainy season. It’s imperative to go with a tour guide who will arrange permits from the Forestry Department (being without a permit in the reserve is punishable by a fine).

Young scarlet ibis (distinguished by the dark feathers among the red ones) feed on the Caroni Swamp mudflats. Photo by Chris Anderson

At the top of every birder’s list is the Caroni Swamp: the protected breeding grounds of the national bird, the scarlet ibis. Located a few miles outside of Port of Spain and just west of the airport, the swamp can be seen on the final approach before landing. Just off the highway you will find the boats parked up and waiting. Most leave at 4pm. Within minutes the sound of cars fades and you enter the eerie silence of the swamp. Mangrove channels create a dramatic backdrop for the 100 species of birds that make their home here alongside snakes (boas) in trees, crabs and snails. Species spotted include the straight-billed woodcreeper, red cap mask cardinal, juvenile night heron, pigmy kingfisher, tropical screech, common potoo, flamingo, osprey, great grey heron, and the great egret. At dusk the sky is filled with streaks of red as hundreds of scarlet ibis return to roost in trees on an island in the middle of the swamp. For the serious birder, a private tour can be arranged with a reputable tour guide.

Just about everywhere you go, you will see up in the branches of tall trees the hanging nests of the crested oropendola (or cornbird). These architectural wonders are painstakingly woven with vines and banana fibers. The nests can be three to six feet long. The birds live in colonies, so you may see more than a dozen of these nests in one tree. The female takes 9–11 days to make her nest. The male will watch her work, and if he doesn’t like what he sees, he tears it apart so she has to start over again… 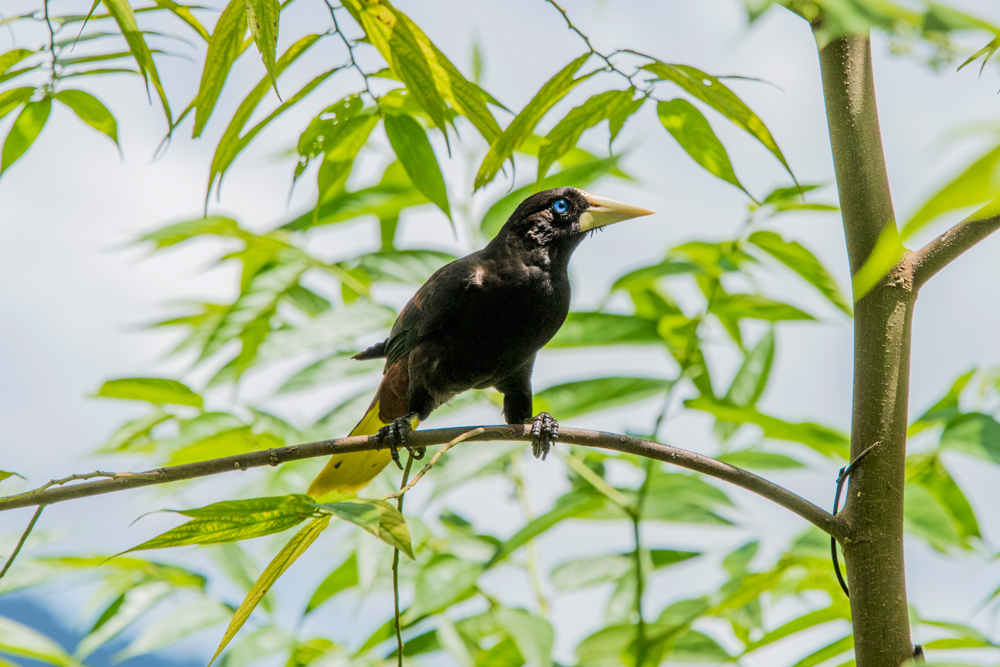 An Oropendola Psarocolius, commonly known as a cornbird, waits his turn for food at Asa Wright Nature centre. Photo by RAPSO Imaging