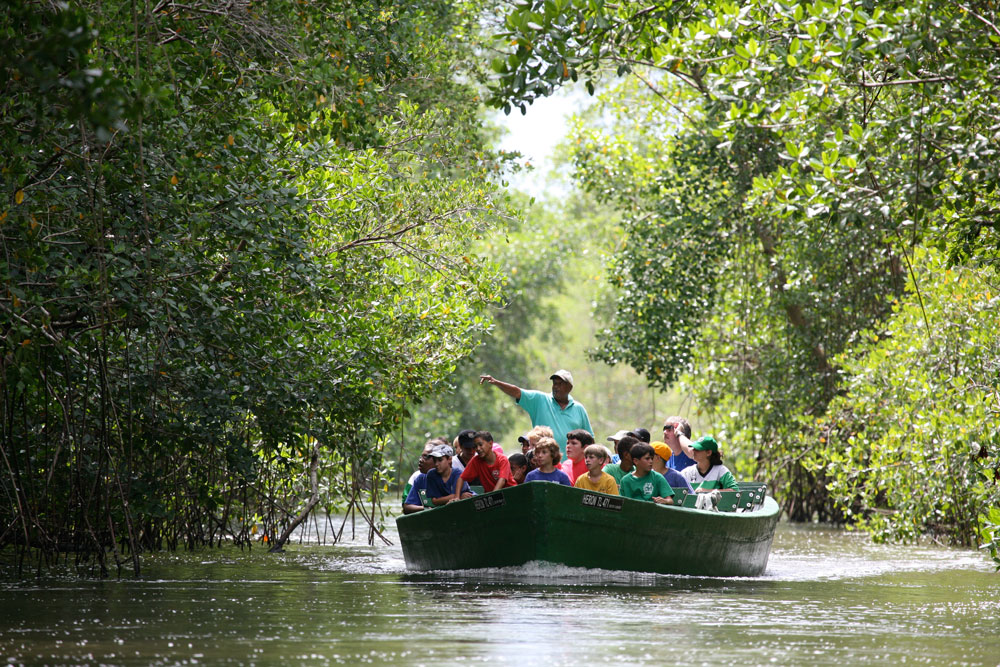 Just 20 minutes from the Savannah, in the mountains overlocoking Maraval, you will find a tight-knit community with French, Spanish, First Peoples, and African genes. Some of the elders still speak patois, the creole French that was the first widely spoken language on the island. These steep Paramin hills are known for both their magnificent views and their seasoning herbs. Old traditions are still alive, like playing blue devil and jab jab on Carnival Monday (boys and young men coat their bodies in paint and beat biscuit drums), and singing parang (Venezeluan-born music) at Christmas time. You can take a jeep on Saut D’Eau Road with the locals, or hire one for the trip/day. To go to the lookout point will cost less than US$10. Ideal for a picnic, long walks, birdwatching and photography. 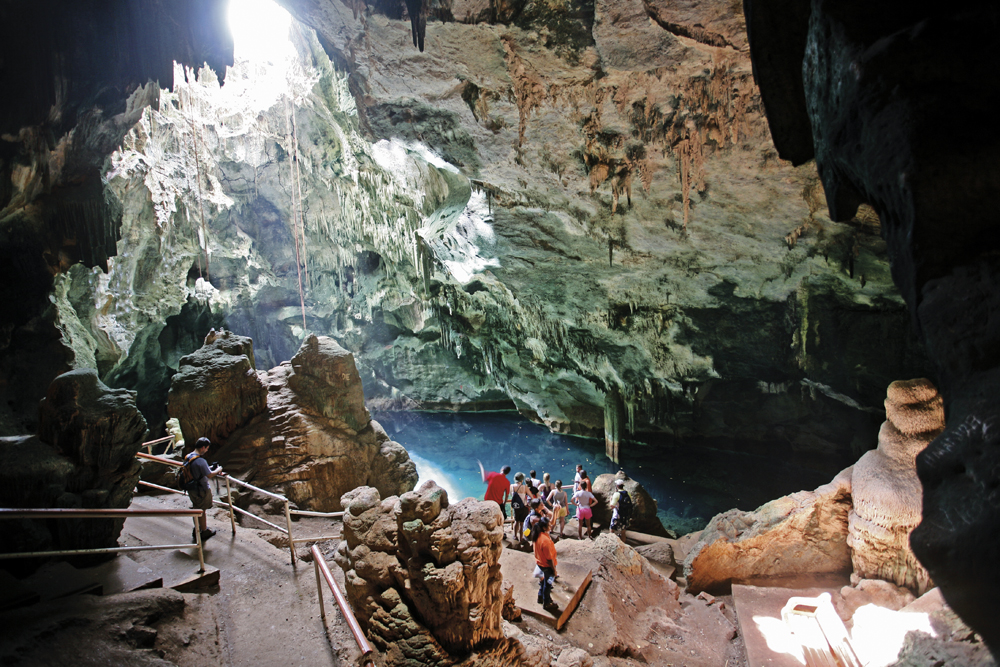 The Chaguaramas National Heritage Park in Trinidad’s northwestern peninsula is just 20 minutes from Port of Spain (with no traffic, of which there is a lot on weekends and public holidays).

Home to the wondrous Tucker Valley, hikers, bikers, explorers, bird watchers, hashers, archers, and golfers all have their place in “Chag”, as it’s affectionately called. In addition to the emerald green waters of popular Macqueripe Bay (which is scheduled for upgrade works in 2018), the lush rain forests of the valley are crisscrossed with nature trails. Howler monkeys can be heard in the forest canopy and pairs of green parrots often pass. The Covigne River trail passes through nutmeg groves and along a tributary of the Cuesa River uphill through a gorge. Along the way, you will pass abandoned cocoa, coffee, and nutmeg plantations. The trail ends at a waterfall with a plunge pool.

Edith Falls is located in an abandoned cocoa estate nestled against the eastern side of Morne Catherine and overlooking the golf course. A fairly gentle hike, you will see stands of majestic bamboo, heliconias, rubber trees and fishtail palms, and hear red howler monkeys in the forest canopy along the trail. If you decide to hike on your own, inform the Chaguaramas Development Authority (225-4232, chaguaramas.com)

Recent development in Chag is not without controversy for those who fiercely want to preserve the natural environment, rustic charm, and tranquillity of this treasured heritage park. But that hasn’t deterred those who enjoy the area’s latest man-made attractions, including the 1,400ft of beachfront walkway known as the Boardwalk; gazebos are available for private get-togethers, while pedal-boat rides will keep the kids happy — as will the Five Islands Waterpark, and Safari Eco Park.

NOTE: If you decide to hike on your own, you must inform the Chaguaramas Development Authority (225-4232).

In true Trini style, the excitement of zip-lining has been further amped up with views of both forest and sea. ZIP-ITT Adventure Park in Chaguaramas has seven lines (one passes over Macqueripe Beach) and five canopy walks (net bridges) among the trees of Tucker Valley, where you might spot a howler monkey or two as you zip by. TT$120 • 303-7755 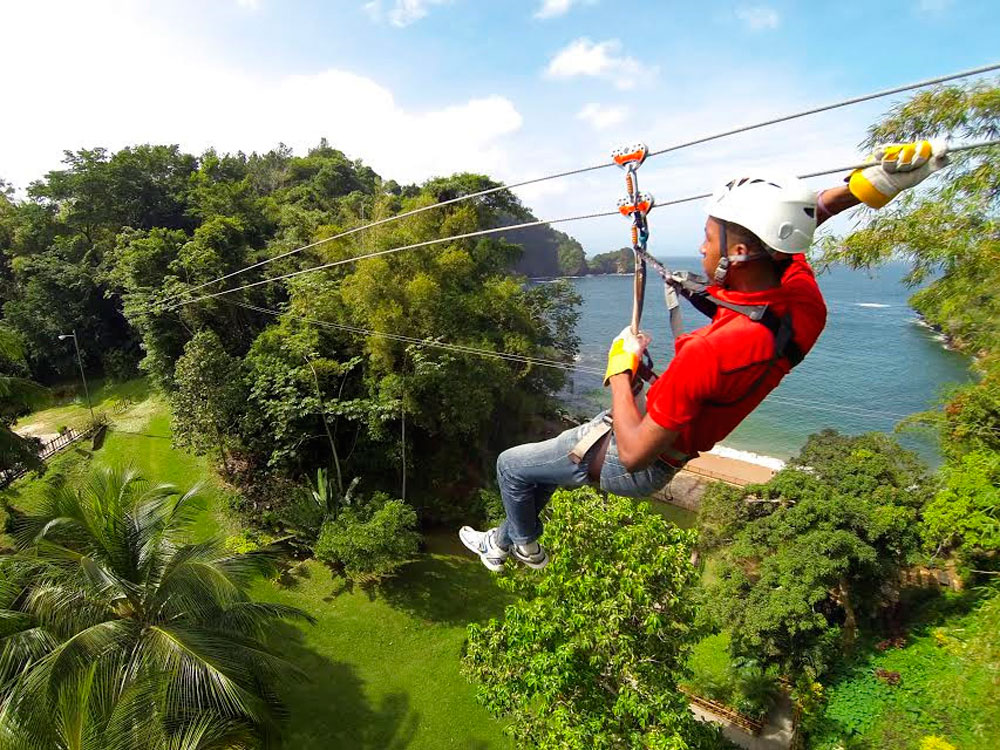 Just off the northwest coast of Trinidad, this group of smaller islands have become beloved escape routes for the wealthy living along the peninsula. Many have holiday homes on one of the islands. In the distance you can see mountains — the nearby coastline of Venezuela. There are the Five Islands (Caledonia, Craig, Lenagan, Rock and Nelson, which was where East Indian immigrants were quarantined when they arrived by boat from 1845 onwards); Diego Islands (Carrera, and Constadt), Gaspar Grande, Gasparilo Island (aka Centipede), Monos, Huevos and Chacachacare (which was once a leper colony).
These islands were originally the ceremonial grounds of the First Peoples. The islands were later occupied by the Spanish who built forts, and even burnt and sank their ships here. Chacachacare has saltwater ponds, ruins and a still-functioning lighthouse that some claim has the tallest focal point in the world at 251m/823ft.

Pirogues and fishing boats leave from marinas along the coastline, where hundreds of yachts and speed boats are stored. On Gaspar Grande, the jetty at Point Baleine was once a whaling station. This is the home of the underground Gasparee caves, which are accessed via a staircase. Here you will find stalagmites and a still pool known as the Blue Grotto, with its ‘sunroof’, a hole in the rocks that allow sunlight into the cave. 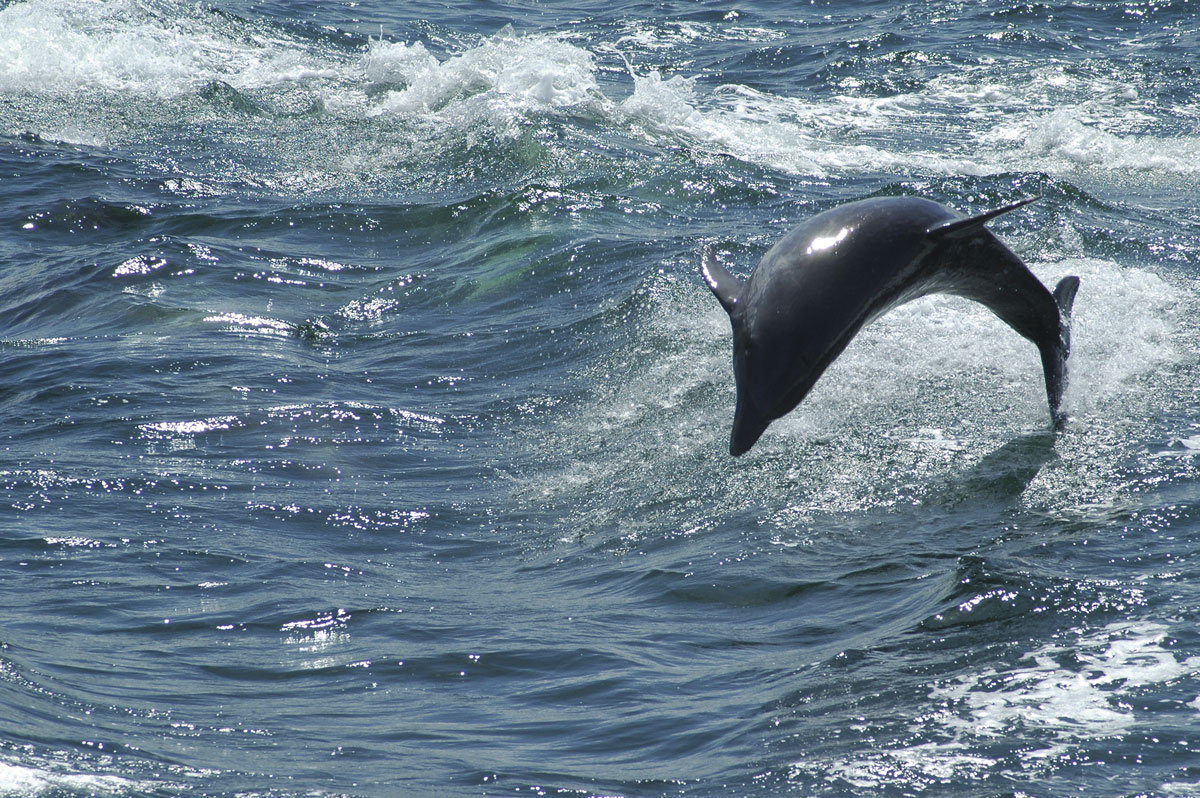 A dolphin plays in the wake of a boat ‘Down de Islands’ (DDI). Photo by Rapso Imaging

This 1,500-acre bird sanctuary in the Arima Valley is one of the first nature centres to be set up in the Caribbean, offering a chance to see dozens of hummingbirds, tanagers, honeycreepers, and bananaquits feeding up close. The main centre and guesthouse are located on a former cocoa-coffee-citrus plantation. Trails through the rainforest bring you close to all sorts of wildlife, from trapdoor spiders and woodpeckers to blue emperor (morpho) butterflies. 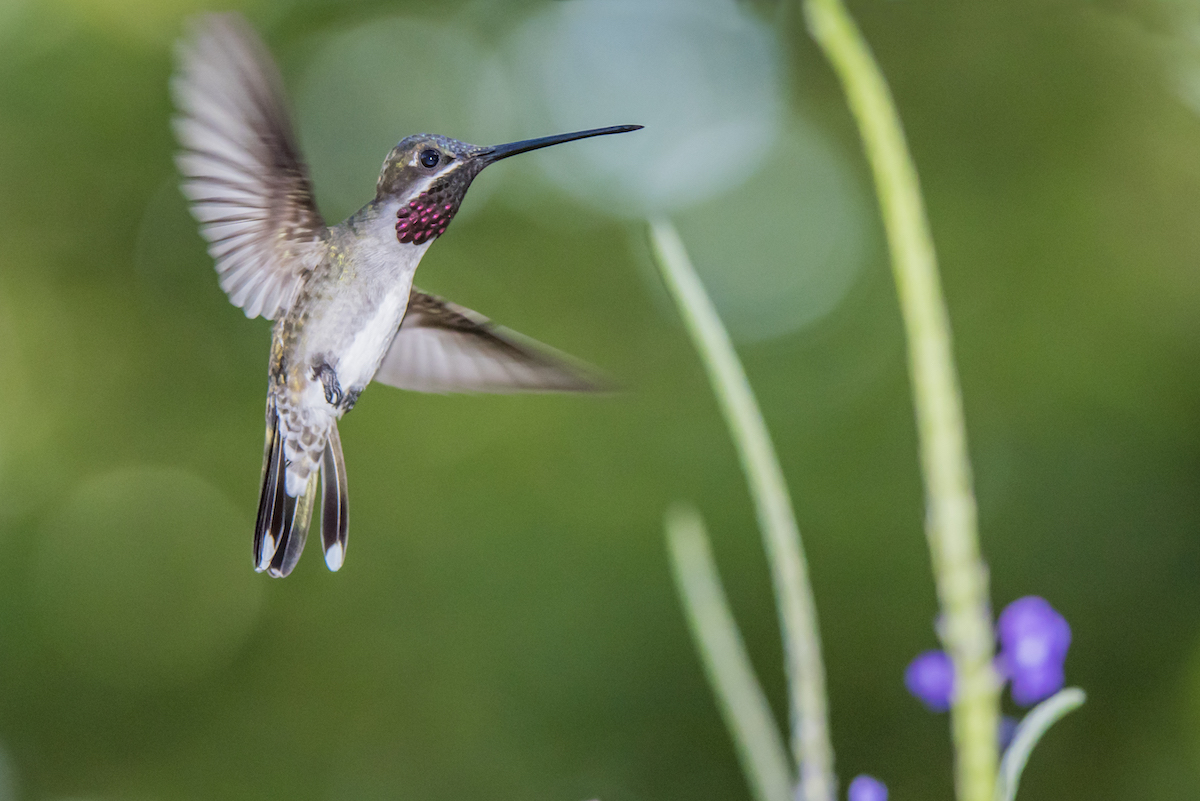 Yerette, Home of the Hummingbird

For a more intimate experience of the hummingbird, spend a couple of hours at the home of Theo and Gloria Ferguson in Maracas, St Joseph. Their garden has a spectacular view of the Northern Range. Sit on the porch and enjoy juices, meals and pastries for breakfast, lunch or afternoon tea alongside purple honeycreepers and hummingbirds. Dozens of hummingbirds flit by, some a few inches away, as they sip from dozens of feeders and flowers. Theo is a knowledgeable host, with a collection of photos for sale, and a slide show about the tiny acrobats. 663-2623, yerettett.com

This is an oasis of ponds surrounded by green forest, set within the sprawling grounds of an oil refinery complex. Home to rare ducks, water lilies and lotus blossoms, cormorants, caimans, parakeets and peacocks, researchers and birders can learn about efforts to re-introduce endangered wetland birds to their natural habitat. Small boats take you out on the two ponds, where you can photograph the whistling tree duck, kiskidee, purple gallinule, scarlet ibis, blue and gold macaw, wild muscovy duck, green heron, yellow-hooded blackbird, pied water tyrant, cardinal, ringed kingfisher, black skimmer, grey hawk, and the snakebird (or anhinga). A boardwalk along the first pond can be accessed by wheelchairs and baby strollers. An on-site learning centre houses a small Amerindian museum, and there is a full-service guesthouse with areas for retreats, corporate workshops and seminars. Advance bookings required. 658-4200 ext 2512, 612-2463, papwildfowltrust.org

At the top of every birder’s list is the Caroni Swamp: the protected breeding grounds of the national bird, the scarlet ibis. Located a few miles outside of Port of Spain and just west of the airport, the swamp can be seen on the final approach before landing. Just off the highway you will find the boats parked up and waiting. Most leave at 4pm. Within minutes the sound of cars fades and you enter the eerie silence of the swamp. Mangrove channels create a dramatic backdrop for the 100 species of birds that make their home here alongside snakes (boas) in trees, crabs and snails. Species spotted include the straight-billed woodcreeper, red cap mask cardinal, juvenile night heron, pigmy kingfisher, tropical screech, common potoo, flamingo, osprey, great grey heron, and the great egret. At dusk the sky is filled with streaks of red as hundreds of scarlet ibis return to roost in trees on an island in the middle of the swamp. For the serious birder, a private tour can be arranged with a reputable tour guide.

The Barcant butterfly collection, the only one of its kind in the region, comprises more than 5,000 specimens (700 species, including the blue emperor) in a re-created tropical forest. Children will thrill at the sight of the butterflies and sounds of nature as they walk through the “mountains of the Northern Range”. Angostura acquired the collection in 1974 and it has been at the company’s compound (Eastern Main Road, Port of Spain) since. You can also book a tram tour of the Angostura factory, introducing you to the company’s history and making of their world-famous bitters and celebrated rums. Tours (two hours) are 9:30am and 1:30pm, Monday–Friday; advance booking required: 623-1841, betancr@angostura.com

The largest natural deposit of asphalt in the world, Trinidad’s Pitch Lake is deceptively boring looking from above — like a giant empty parking lot. But it’s what’s beneath that counts. This tar baby, nestled on the southwestern coast, is a natural wonder. Estimated to contain 10 million tonnes of asphalt, the Pitch Lake is one of the three largest in the world. Spanning 109 acres, the lake’s asphalt has been used to pave roads and airport runways. Pools formed from rain contain high levels of sulfur which are good for the skin and joints. An important aspect of earth’s history, the lake holds deep secrets about the formation of oil and gas. Artifacts from the First Peoples, for whom the lake was sacred, have been unearthed here; some can be viewed at the museum in the visitor centre where you can also ask for a tour guide. 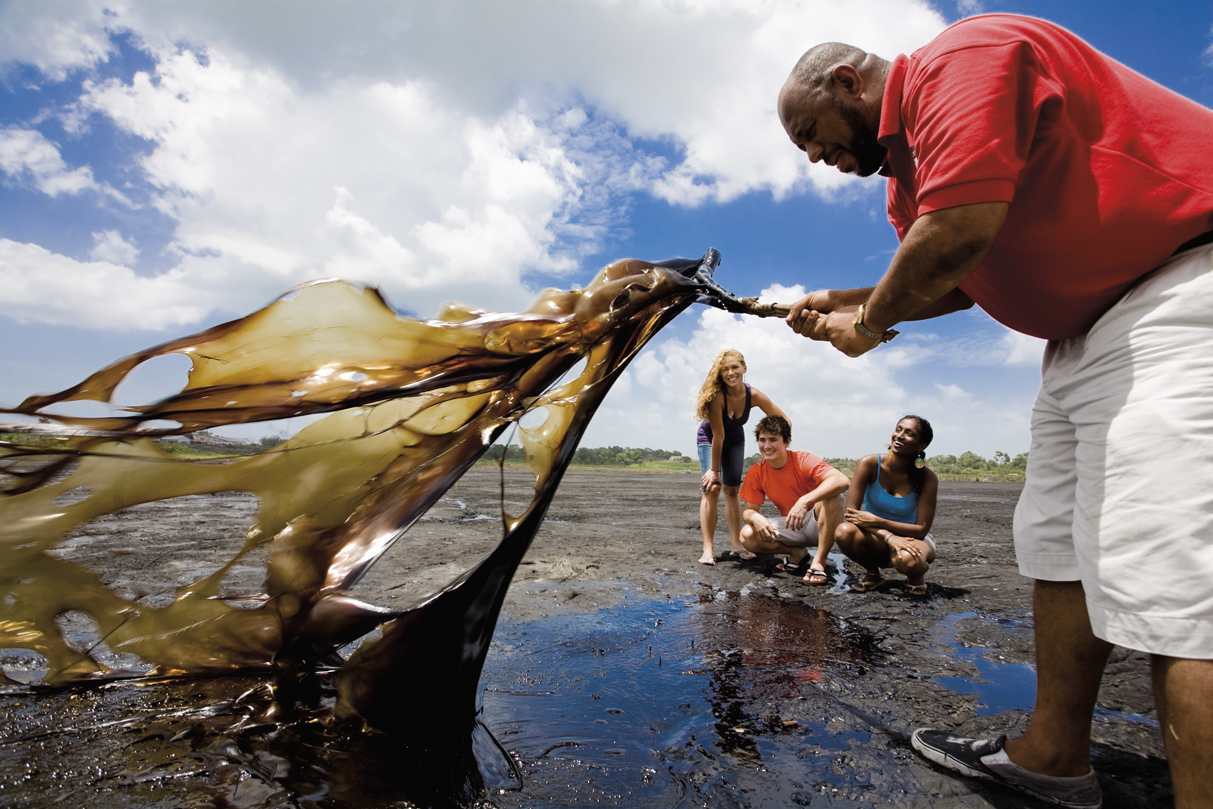 This huge 260-acre park that is the crown jewel of the capital, and holds a very special place in the Trini heart. Originally part of the Peschier family’s Paradise Estate, a portion of land in the centre remains a burial ground; it was converted into a city park in 1817. The Caribbean’s oldest recreation ground — and reported to be the world’s largest roundabout at approximately 3.5km/2.2 miles and 260 acres — the Savannah is popular for sports, kite-flying (especially around Easter), walking, joggers, and food/drink vendors.

On the northern side, you will find the Emperor Valley Zoo (founded in 1947, tel: 622-5344) and the Botanical Gardens (established in 1820). Here you can relax among one of the oldest collections of exotic plants and trees in the Western Hemisphere. Children especially will enjoy seeing the zoo’s rare white Bengali tigers, lions and giraffes, and a chimpanzee who likes to watch TV.

Along the northwestern side are the “Magnificent Seven“. These colonial-era homes on the northwestern edge of the Savannah are in varying degrees of repair and use, reflecting their diverse histories and ownership, but many of them have either been recently been or are actively being restored. From south to north: Queen’s Royal College (1904, boys’ secondary school); Hayes Court (1910, Anglican Bishop’s residence); Mille Fleurs (1904); Roomor (private home); the Roman Catholic Archbishop’s residence (1903); Whitehall (1907); and Killarney or Stollmeyer’s Castle (1904).

Across from the Savannah on the southeastern side is the Memorial Park and the iconic National Academy of the Performing Arts. Next door is the National Museum and Art Gallery, home to a permanent collection of 10,000 items in galleries focusing on art, social history, natural history, economic history, petroleum and geology, 19th century painter Michel-Jean Cazabon, as well as a small gallery dedicated to carnival arts (photographs and videos are not allowed). 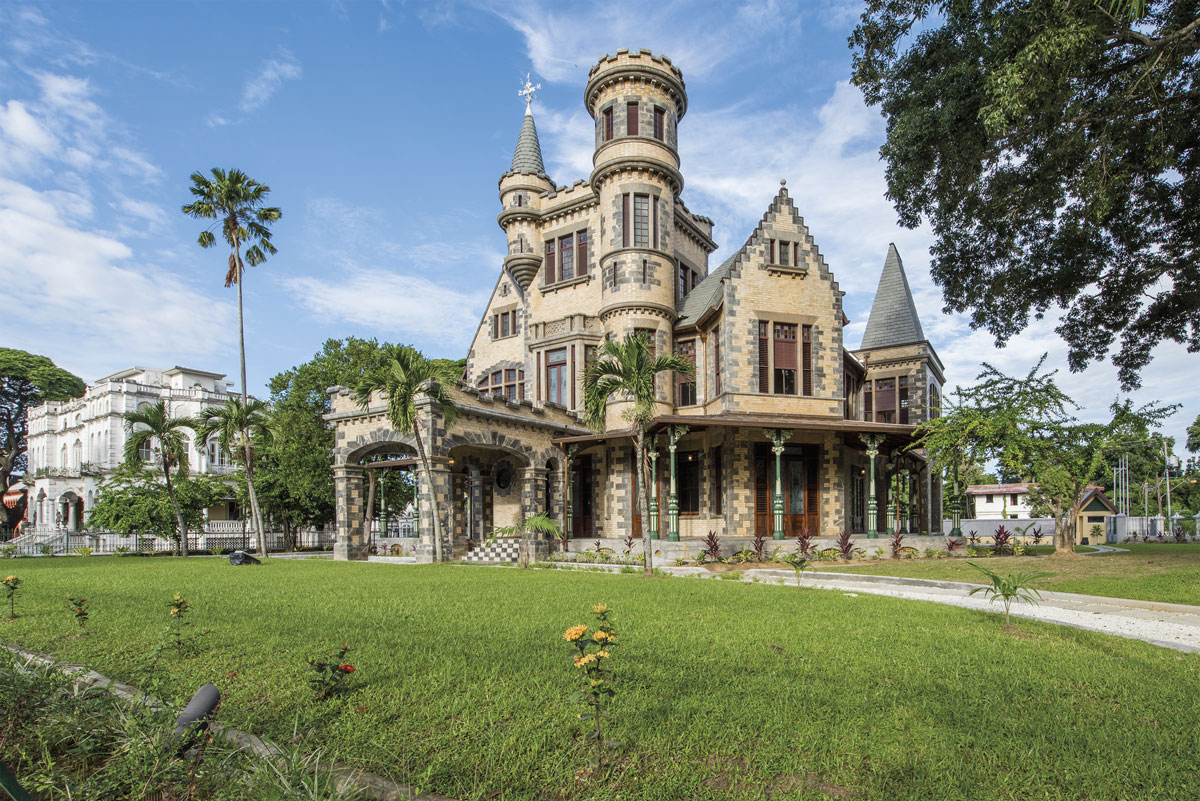 Stollmeyer’s Castle was built in 1904. Photo by Rapso Imaging