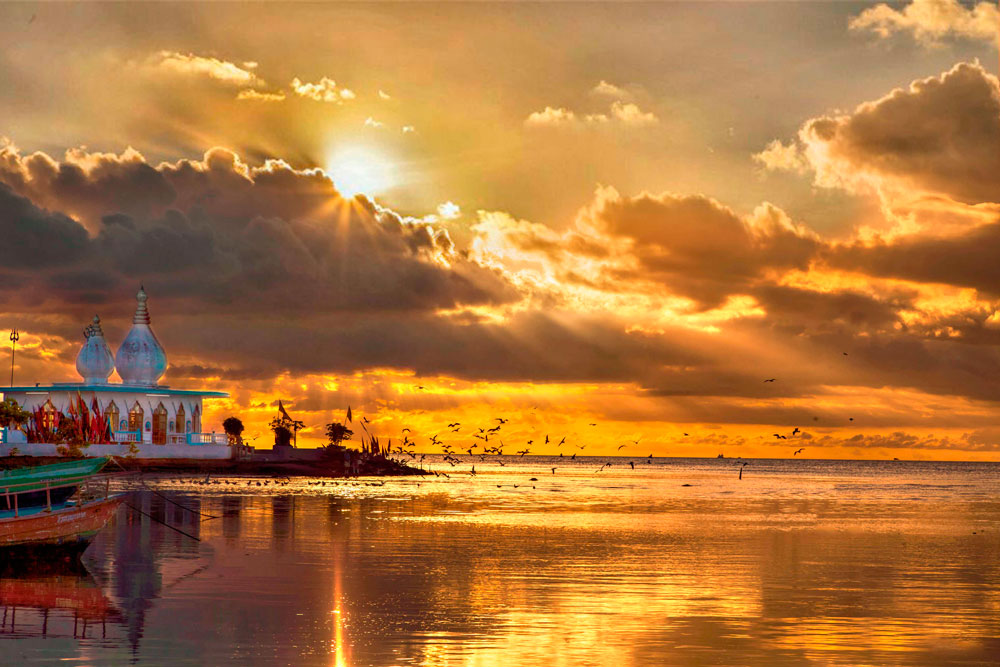 The Temple in the Sea at Waterloo at sunset. Photo by Nyla Singh

The July/August vacation (or, as some say here in T&T, “summer”) is usually met with trips abroad, camps, tours, and many activities for the entire family. Here are some suggestions to keep the fun going this August, especially if you’re on a tight budget.

Take a road trip to…

Temple in the sea (Waterloo)

During colonial days, Siewdass Sadhu was prohibited from building a Hindu temple on land. Determined to have a temple, he toiled for 25 years to build his “floating mandir” into the Gulf of Paria. Unfortunately sea erosion prevented him from finishing before his death, so in 1994, the government completed the temple to commemorate the 150th anniversary of the first arrival of Indian indentured immigrants. Here are more ideas in Central Trinidad and the west coast.

History buffs will relish in the coverage of Amerindian days, the Cold War and two World Wars. You’ll also have the opportunity to captain the BWIA aircraft and other aviation relics on display. And, of course, there’s lots more to do in Chaguaramas! $50 adults, $30 children (group rates available for over 20 persons)

Green, hawksbill and the endangered leatherback turtles head to Grande Rivière, Matura and other beaches around the country to nest. Precautions should be taken around the legally protected animals; and permits may be required for access.

Don’t feel for a movie but just need to get out? There are lots of restaurants and shops at MovieTowne. And best of all, there’s free live entertainment all summer in Fiesta Plaza. Magic shows, plays, concerts, and more are in store. Be sure to take in Family Fiesta on 20 August, and the DiscoverMe – Artiste of the Month show on 26 August at the Port of Spain locations. (For more entertainment options, click here)

The House of Angostura is open for rum tours and viewing of a collection of butterflies. Learn all about the history of the award winning Angostura aromatic bitters. For more, click here. ($60 adults, $10 children)

Birds, tigers, fish, reptiles, and two new zebras are just some of the animals you’ll see among the hundreds at the zoo ($30 adults, $15 children). For more things to do in and around the Queen’s Park Savannah, click here.

1 August is Emancipation Day but the celebrations will continue for a while longer thanks to the Remember When Institute. Emancipation exhibitions will run until 10 August at the North Atrium in Trincity Mall, and until 14 August at the Culture Division located at buildings 51-55 Frederick Street, Port of Spain.

Spanish, Catholic, Amerindian, and parang traditions are connected at one of Arima’s main cultural affairs, as the First Peoples Community and Roman Catholics unite to commemorate the death of saint Rosa de Lima.

Starting in January each year, the competition preserves and builds on Trinidad and Tobago’s Folk traditions through amazing cultural presentations in:

Artists and artisans from 23 countries around the region, Latin America and the Caribbean diaspora will display their talent at CARIFESTA in Barbados. But before the Trinbago contingent goes, they will showcase a preview of their work. On 9 August, don’t miss the 60-member Trinbago delegation consisting of the National Theatre Arts Company, East Indian Classical Dancers, Newtown Playboys on steel pan, and other cultural performers at the North Academy of the Performing Arts (NAPA). Trinidad and Tobago will host CARIFESTA XIV in 2019.

Coconut desserts, crafts, bath and body products, food and much more are featured at this coconut themed event.

Teams will demonstrate the versatility of Angostura aromatic bitters by creating delicious recipes as they vie for the grand prize of TT $10,000. This year’s event will be held at the House of Angostura.