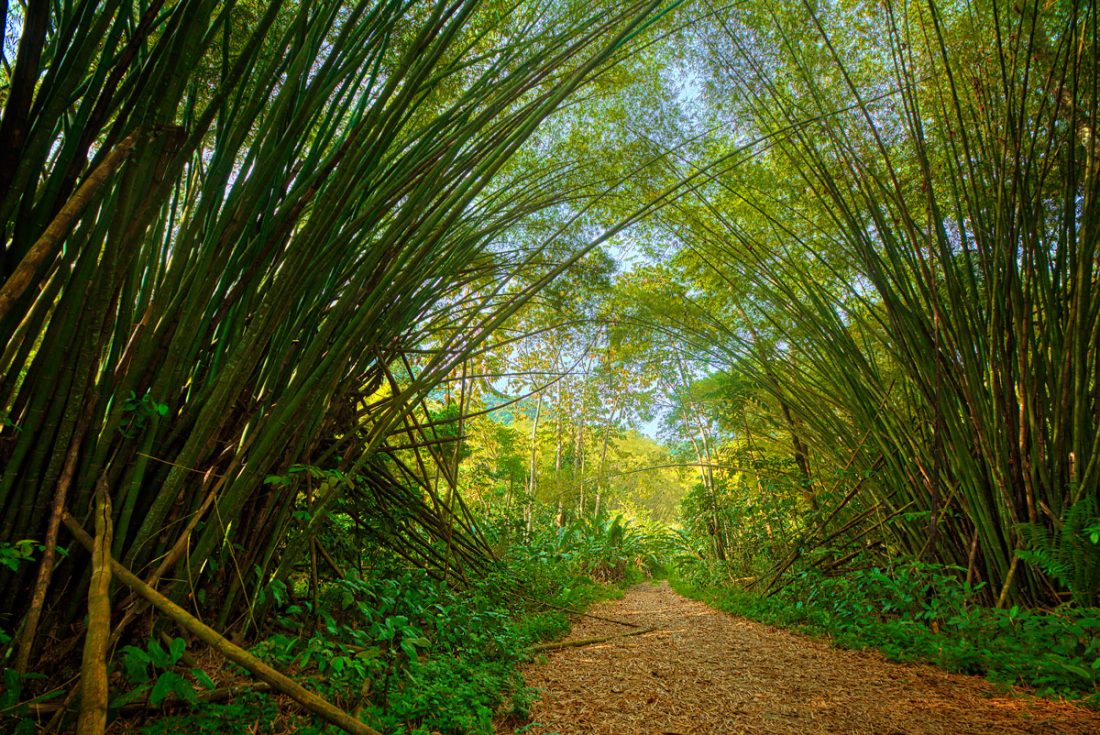 The Bamboo Cathedral in Chaguaramas. Photo by Chris Anderson

Fort George—Diego Martin—Chaguaramas and islands (Port of Spain to Chaguaramas: about twenty-five minutes)

High in the hills overlooking Port of Spain, the Gulf of Paria, west Trinidad and Central Trinidad is Fort George (approached from George Cabral Street in St James). The British landed on this coast in 1797 and snatched the island from Spain. Fort George (1804), 1,100ft above Port of Spain, became the main defence against attack. But it never experienced any military action, was decommissioned in 1846 and become a signal station in 1883. Original cannon, cannon balls and part of the dungeon remain. But the real attraction now is the panoramic view (the hills to the west are Venezuela’s Paria peninsula). Open 10am to 6pm, admission free.

Leave St. James via the Audrey Jeffers Highway that emerges from Wrightson Road. On the left loom the apartment towers and commercial development of Westmoorings, while the densely populated Diego Martin valley snakes northwards through the hills. Once given over to sugar and cocoa estates, Diego Martin is today the city’s biggest dormitory suburb. A highway runs along the valley. Also in Diego Martin:

Beyond, the road climbs the hills and emerges at the North Post marine radio station, with a sudden panoramic view of the north coast.

On the old Diego Martin Main Road, which runs parallel to the highway, the house built by the late great calypsonian Lord Kitchener (“Rainorama”) has a small collection dedicated to him.

Access Chaguaramas from St. James along the coastal highway through Westmoorings, Glencoe, the fishing village of Carenage, and Point Cumana — made world-famous in the Andrews Sisters’ fifties rendition of Lord Invader’s Rum and Coca-Cola.

The highway narrows and winds through Glencoe and Carenage before reaching Chaguaramas National Heritage Park. During World War II, Chaguaramas was a huge American military base, but it’s now a playground for Port of Spain and a haven for yachts, especially during the hurricane season.

The 14,572-acre peninsula is characterised by scenic beachfronts and steep green mountains, except for the flat land of Tucker Valley.  There are entertainment venues here, a golf course and a military museum. There’s kayaking, hiking, birdwatching, windsurfing and golfing. The offshore islands (Gasparee, Monos, Chacachacare) are popular weekend getaways. Chaguaramas is also home to a large yachting industry, with a full range of marine repairs, construction facilities and support services.

For current information about tours and guides (recommended or required for some trails), call the Chaguaramas Development Authority (CDA) on 634-4227.

This tranquil sweep is the first thing you see, a popular spot for kayaking and cycling (TT$20–$40 an hour). The Kayak Centre opens daily 6am to 6pm; Bay Sports rents cycles (weekends 6am to 6pm).

On the left as you pass the entrance pillars of the old American base, Pier 1 is an entertainment centre that also operates a range of boat trips and charters. These include pleasure and party cruises, trips around the offshore islands, a full day at Chacachacare, a weekly service to Guiria in Venezuela (three and a half hours each way), and a floating hotel-conference centre-restaurant. Opposite Pier 1 is the Convention Centre. T: 634-4472 ext. 27

Chaguaramas’ first sandy beach, a popular bathing spot for locals, particularly on weekends. But the water along this northwest coast is not exactly pristine; there’s better swimming at Macqueripe.

Obliquely opposite the old heliport (where the Miss Universe competition was staged in 1999) is the workshop of Trinidadian designer Peter Minshall and his Minshall’s innovative and daring designs, materials and presentations have had a huge influence on Carnival since 1976 when he launched his first band. He also designed costumes and presentations for the Barcelona and Atlanta Olympics, and won an Emmy for his efforts in 2002. T: 634-4491/2.

Documents Trinidad’s involvement in World War II and other conflicts, especially the history of the Chaguaramas military base: warships, wrecks, weaponry and aircraft, in photographs, dioramas and artefacts, dating back to the time of the Amerindians. A Lockheed TriStar once operated by the national airline is parked outside. Run by military historian and former coastguard officer Gaylord Kelshall. Open daily, admission TT$10, tours on request. T: 634-4391

Further along, Hart’s Cut and Chaguaramas Bays are the heart of Chaguaramas’ yachting industry, which has sprouted its own restaurants, clubs and convenience stores. The Hummingbird Marina is operated by Kwailan and Harold La Borde, Trinidadian sailors who circumnavigated the world in sailing vessels called Humming Bird I, II and III, designed and built by Harold. Other marinas offering a range of chandlery, haul-out, repair and storage services include IMS Yacht Services; Coral Cove Marina Hotel; Peake’s Marina; Power Boats and the Trinidad Yacht Club; Budget Marine; Calypso Marine; Tardieu Marine; Tropical Marine and Echo Marine. You’ll also pass  liming and partying spots, the O2 Park and the revamped Anchorage.

Offers shopping, a business hotel and conference centre, restaurant, travel agent and transport, in addition to boat services. It also manages the Chaguaramas Port, servicing oil and industrial barges and ships. The mini-mall provides for most of the yachties’ needs.

The Western Main Road comes to an abrupt end at the coastguard base at the tip of the peninsula. The beautiful sheltered bay is only accessible by boat. It’s safe anchorage, with good swimming. Snorkellers enjoy reef features, turtles, manta rays and occasionally dolphins.

Obliquely opposite Pier 1, turn onto Macqueripe Road to enter Tucker Valley, the heart of the Chaguaramas National Heritage Park.

On the right boasts magnificent trees which are several hundred years old. It’s the starting point for several popular hiking trails, including the Nutmeg Vale, Huggins, Covigne River and Samaan Park Trails. Permission and/or a tour guide is required.

Accessible via a signposted road on the left, is a 9-hole, par-67 public course that takes about two hours to complete. Visitors can buy a special membership which includes twenty balls on the 250-foot driving range, and refreshments at the Club House. Longer-term membership and rental equipment are available. There are plans for upgrading the course to 18 holes. Daily rates TT$90 for 18 holes, or $45 for 9. T: 634-4312.

Accessed via a trail at the western end of the golf course which its way upwards through a tonka bean plantation, rainforest and bamboo. Admission TT$20, no guide necessary. T: 634-4227.

Further along the Macqueripe Road, usually blocked off by a barrier, a small road on the right leads to the World War II Tracking Station. If the barrier is open, it’s an easy winding drive through the “Bamboo Cathedral”, a beautiful stretch of arching bamboo forest, towards the summit of Morne Catherine. A gravelly path opens to the left, leading to the Tracking Station.

Where Macqueripe Road ends on the north coast. Recently renovated, it’s a small, sheltered beach which is good for swimming and snorkelling. There’s a reef just offshore, and ziplining overhead.

Offshore & Down the Islands (DDI)

Going “down the islands” means a trip to one of the small islands off Chaguaramas (as opposed to “up the islands”, meaning a trip northwards to other countries in the island chain). Along the way, you can encounter dolphins that might keep your boat company, and see swarms of jellyfish around Easter time. To visit the offshore islands, you need to book a tour through the Chaguaramas Development Authority or a tour operator such as Caribbean Discovery Tours or T&T Sightseeing Tours; or try and catch a water taxi or pirogue at the Island Property Owners Association near the end of the road (T: 634-4331) or the Yachting and Sailing Association at Hart’s Cut (T: 634-4938).

Once had a whaling station at Point Baleine. Its prime attraction now is the Gasparee Caves with their Blue Grotto. The island also has a small resort area at its eastern end

A prison island, is a short distance to the east

Is next, which for many years was the landing point for indentured labourers arriving from India, and is a national heritage site.

An Amerindian name, Chacachacare is a little further away to the west (about thirty minutes): it has a salt-water pond, an old whaling station, some attractive beaches, and one of the oldest lighthouses in the hemisphere (1896). In the early nineteenth century, Venezuelan revolutionaries based themselves on Chacachacare; later, the island was the site of a leprosarium, whose ruins can still be seen.