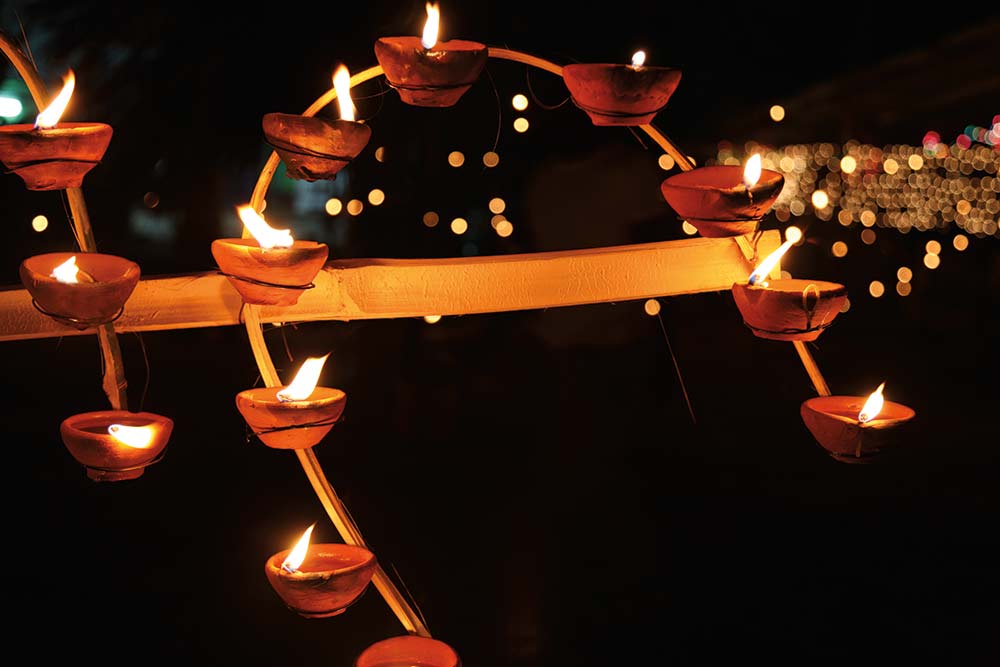 Editor’s note: As with all festivals in Trinidad & Tobago, 2021 Divali celebrations have been scaled back because of the Covid-19 pandemic, with some elements of the festival going virtual (including Ramleela) while others will be celebrated at home

Celebrated in October or November according to the moon, this Hindu lunar festival of lights honours Mother Lakshmi (goddess of light, beauty, riches, and love), and also celebrates the return of Lord Rama from exile. The thousands of beautiful flickering deyas, which are lit across the country by Hindus and non-Hindus alike, illuminate his path. Felicity, in central Trinidad, is among the most popular venues.

In the days leading up to Divali (a public holiday) — celebrated during the month of Karthik on the Hindu calendar — Trinidadians of all ethnicities and religions visit the Divali Nagar site in Chaguanas, and hundreds take part in the ritual lighting of deyas at dusk on the day itself.

The Ramleela, theatrical re-enactments of stories from the Hindu scriptures, takes place just before Divali (usually in October). It is a nine-day, outdoor festival dramatising the life of Rama with music, dancing, colourful costumes … and an explosive finale! Also known as Ramdilla and Ramlila, the best-known productions are held in Couva and Felicity. Hundus and other patrons across Trinidad attend the outdoor spectacles, which involve bright costumes and an epic finale.

A deya lit for Divali. Photo by Rapso Imaging

A little girl lights a starlight from a deya at Divali. Photo by Stephen Broadbridge

Divali celebrations are held annually each October/November, and feature the lighting of oil-filled, clay deyas. Photo by Ariann Thompson/MEP Publishers

An actor is dressed and made up in splendid detail for Ramleela re-enactments in Trinidad. Photo: CaféMoka Gallery

It’s an amazing sight: hundreds of flickering lights twinkling in the streets and in houses. A contraction of the Sanskrit word “Deepavali”, meaning “row of lamps”, Divali is also known as the festival of lights, and culminates in the lighting of small clay lamps (called deyas) filled with oil to signify the triumph of good over evil, light over darkness.

Since Trinidad’s population is close to 40% Indo-Trinidadian (primarily the descendants of indentured workers brought to work the sugar plantations), Divali has become one of the most anticipated holidays of the year — and is celebrated by all. As usual, Trinidadians have put their own stamp on the festival by using coconut oil instead of the traditional ghee (clarified butter). Displays in towns and villages across the island are a sight to be seen, with bamboo split and bent into fantastic shapes all decorated with the lighted deyas.

Hindu devotees honour this special season with reverence and style — by giving a special cleaning to their homes, wearing new clothing, giving charity to the needy, and offering prayers (poojas or pujas) to Mother Lakshmi. Hindu families also welcome friends, neighbours, and family of all faiths and backgrounds to share food and light deyas at dusk. If you’ve got a sweet tooth, make sure to try the kurma, ladoo, gulab jamun, jalebi, peera, and barfie!

But it isn’t just on the steps and in the windows of Hindu homes that you’ll see deyas — you’ll see them in countless homes and on sidewalks across the country, and find people of all faiths visiting the beautiful displays of deyas in parks, squares, and community spaces nationwide.