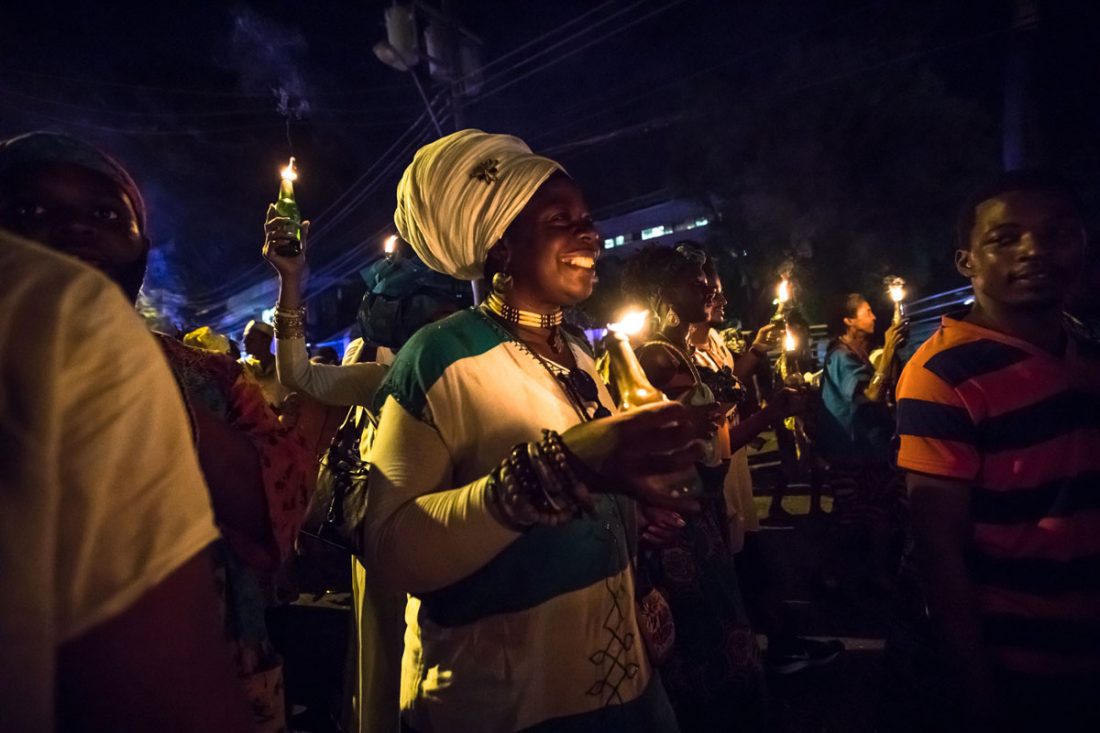 The flambeaux street procession is a hallmark of Emancipation celebrations. Photo by Maria Nunes

Celebrated on 1 August to commemorate the end of slavery in the British colonies (1838), Emancipation Day — a public holiday — is usually marked with street processions (a morning procession, including towering moko jumbies, and a flambeaux-lit Canboulay procession in the evening); religious and spiritual observances; cultural shows and performances (dance, music, and theatre, including by artistes from across the African diaspora); films and lectures (including the Africa Film Festival); exhibitions of African art; a trade exposition; performances (featuring local and international acts); and countless events and activities nationwide. The Lidj Yasu Omowale Emancipation Village in Port of Spain is traditionally the centre of the activities, which also hosts craft and clothing stalls. Many of the commemorative events take place both before and after Emancipation Day. For more: Emancipation Support Committee: emancipationtt.com, 628-5008

The flambeaux street procession is a hallmark of Emancipation celebrations. Photo by Maria Nunes

This dancer does a broom dance at the Prime Minister’s Best Village dance competition 2010. Photo by Edison Boodoosingh

A dancer and drummers in action at the Best Village competition. Photo by Edison Boodoosingh

A dancer at the Oshun River Festival in Trinidad. Photo by Edison Boodoosingh

On 25 March, 1807, the British parliament in London passed a law formally abolishing the slave trade in the British Empire. The United States followed suit by banning the importation of slaves from 1 January, 1808. It took much longer to end slavery altogether, however — freedom for existing slaves did not come for several more decades.

The emancipation movement gained traction on humanitarian grounds, as abolitionists campaigned to end the barbaric trade. A pragmatic, economic argument was also being made, as beet sugar producers in Europe were undercutting the market for cane sugar, and the Industrial Revolution ushered in a new era of mechanisation that made slave labour much less economically attractive or competitive. And for 200 years, enslaved people in the Caribbean mounted dozens of insurrections that forced colonial powers’ hands. As Trinidad & Tobago’s first prime minister Dr Eric Williams stated in From Columbus to Castro:

In 1833, Thomas Buxton presented the Emancipation Bill to the parliament, which was passed and came into effect on 1 August 1834. However, it was not for another four years, after a period of “apprenticeship”, that freedom came to the enslaved in the British colonies, including to the approximately 20,000 in Trinidad & Tobago. These slaves were descended predominantly from the Yoruba, Hausa, Congo, Ibo, Rada, Mandingo, Kromanti (Koromantyn), and Temne tribes in West Africa.

After 1838, many former slaves moved off the plantations and settled into nearby villages — like Arouca, Belmont, Laventille. These settlements also attracted former slaves from other British colonies like Barbados, Grenada, and St Vincent. Some continued to access land on which to grow crops; others headed to the cities to become tradesmen, artisans, and domestic workers.

Emancipation then came to the French territories in 1848, the US in 1865, and Brazil in 1888. But it was in March 1807 that the first legal move was made to end the “African holocaust” that shipped up to 20 million people in horrendous conditions across the Atlantic, and forced them into forced labour in inhumane conditions for the rest of their lives.

Just over 150  years later, on 1 August 1985, the Trinidad & Tobago government declared Emancipation Day a national holiday — thus becoming the first independent country in the world to declare a national public holiday to commemorate the abolition of slavery. (Notably, the day was declared a public holiday in Jamaica in 1893, but the holiday was abolished in 1962 upon the island’s independence from Britain).  The holiday in Trinidad & Tobago replaced Columbus Discovery Day, which had marked Christopher Columbus’ arrival in Trinidad on 31 July, 1498. Today, most of the Anglophone Caribbean nations also have annual Emancipation Day celebrations.

Trinidad & Tobago was the first country in the world to mark Emancipation Day with an official holiday. Lisa Allen-Agostini explains the significance of the anniversary, in this piece published in our sister publication, Caribbean Beat

Every year on Emancipation Day, 1 August, a procession winds its way up from Independence Square to the Queen’s Park Savannah, filling the otherwise silent city of Port of Spain with the sound of drumming, music, and singing. Trinidadians of all hues and races — though predominantly of African heritage — turn out in their best African garb to remember the past and declare a better future, clapping and chanting as they walk and dance.

The carnival atmosphere is underpinned with gravity, however. After all, the holiday commemorates the freeing of enslaved Africans in British colonies in 1838, signalling the close of a horrific chapter in world history, but not the end of the story, by any means.

I’ve walked in the procession alone and with my children, and it always fills me with a deep pride to see so many people of African heritage coming together in joyful praise of freedom. The procession culminates at the Lidj Yasu Omowale Village in the Savannah, where African food, culture, and art are celebrated. Vendors sell everything from African black soap to kente cloth and cowrie shell jewellery. Stages at various parts of the village feature drama, dance, and music, all with African roots.

Trinidad and Tobago was the first country in the world to declare Emancipation Day a public holiday, in 1985. 1 August was chosen because it was on that day in 1838 that the Emancipation Proclamation came into effect. (Despite the Slavery Abolition Act of 1833, enforced in 1834, it would take another four years before the “free” former slaves would actually be let off the estates where they grew sugar cane, cocoa, coffee, tobacco, and other goods on which the British Empire depended.)

Whether you argue that Emancipation was a capitalist imperative (as Eric Williams did), or a humanitarian one (look up the story of the Wedgwood Medallion for that side of the story), or that it was the Africans themselves whose acts of resistance forced the hand of an empire, it’s indisputable that Emancipation changed the world significantly.

The Emancipation Support Committee, which mounts the annual procession and runs the village, is the primary mover in the international observation of Emancipation Day, but other T&T bodies are part of the movement. In the weeks preceding the celebration, the ESC and other organisations host readings, lectures, concerts, and dinners in preparation for the big day. It’s usual to have special guests from the continent — from politicians to celebrated performers such as Angelique Kidjo, the late Miriam Makeba, and the National Senegalese Ballet. And Emancipation Day is now commemorated in several other Caribbean countries, following T&T’s lead.

My own favourite memory of this day is walking in a light drizzle with my then-toddler daughter Najja, and being hoisted up onto the back of a truck carrying a rhythm section. Playing percussive music on drums, bits of scrap metal, and a kind of steel pan called a dudup, the rhythm section seemed to me to embody the best of the spirit of Emancipation Day: we have made something completely new and unique, and we remember why we had to make it.