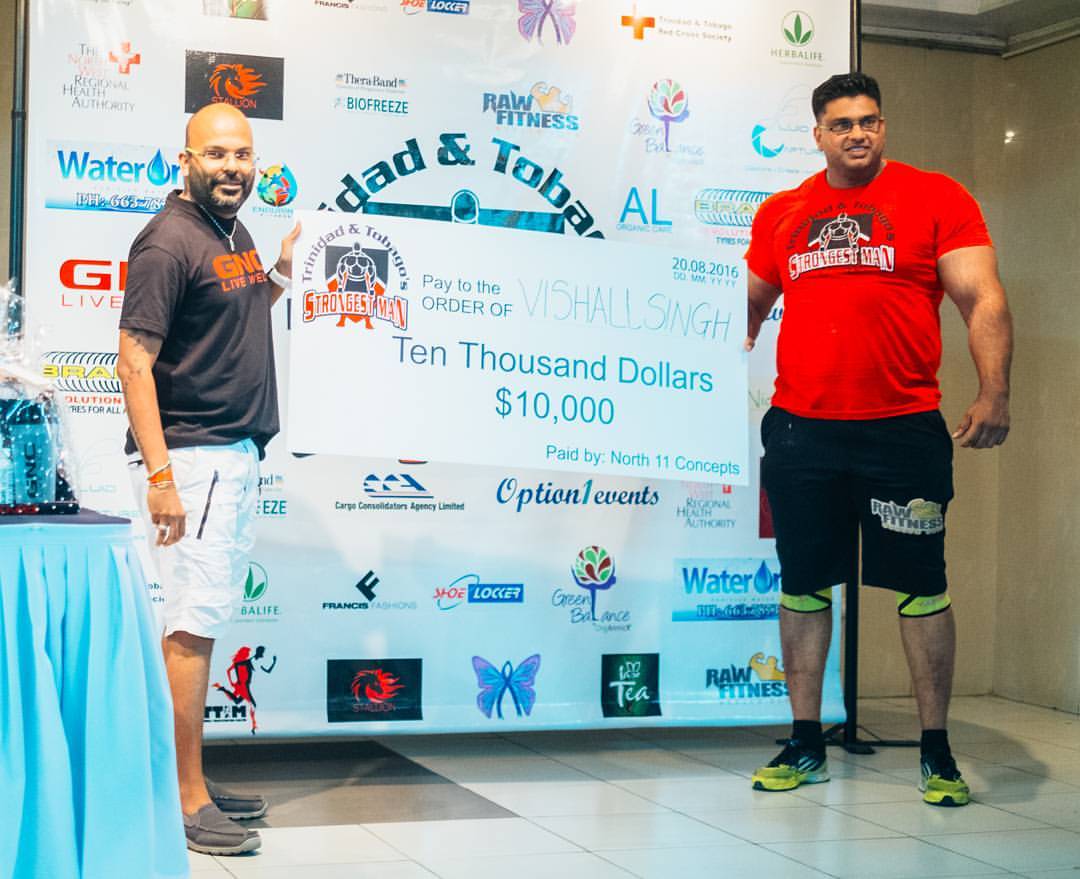 From 10am to 6pm, 13 strong-willed men attempted to prove that super heroes are real. They looked buff, toned and eager for the mission. Some sported t-shirts from their fitness centres, others stripped down to the minimum showing their amplified muscles and veins so big it should have been easy for a nurse to draw blood. Such was the display of strength on stage that one could be forgiven for running to the competitors for protection before running to the security forces at the event…

Barricades separated the audience from the competitors. In the blazing sun, the small audience gathered for the dead lifting event. The goal was to lift barbells weighing a total of 405lbs, with as many reps as possible. The men approached the task with intense looks of determination, no doubt with the additional intent of intimidating their competitiors. This was probably a warm-up for the farmer’s walk event, where competitors were challenged to walk about 30ft with 200lbs in each hand. Two competitors dropped out. Maybe they preferred to push trolleys?

Soca music was in the air. The audience was growing and there was a buzz inside the Civic Centre. Several booths were also placed around the room displaying fitness products — shakes, equipment, vitamins and tonics. Meanwhile, others were promoting massage treatments, relaxation aids, upcoming sport events and a few gyms.

The Strongest Man & Health and Strength expo is the brainchild of Kenneth Lowe. A hydrographical surveyor by profession, Mr. Lowe is no stranger to fitness competitions. For four years, he has competed regionally in the Grenada Strongest Man Competition. He even placed 2nd overall in the men’s heavyweight division. This gave him the motivation to create a competition at home in Trinidad & Tobago.

Lowe’s relationship with his Grenadian counterparts also led them to assist him with the inaugural event. The founder of the Grenadian competition even served as the MC for the T&T event. Three of the competitors were also from Grenada.

The big challenge, which showed the “raw” fitness of the competitors, was the tyre flip. Two tyres weighing 400lbs were lined up for the able-bodied to flip the length of the 35ft designated space. Grunts, groans and a few choice words escaped the mouths of the registrants but they proved why they were there. The 400lb tyre was eventually elevated to a 1000lb tyre. Sly smiles and looks of disbelief followed. The audience cheered on their favourites. Guys that seemingly drink muscle milk for breakfast, lunch and dinner couldn’t flip the tyre once. Perhaps they would have scored gold in a bodybuilding competition at this point.

The audience had a few hulk looking individuals and naturally the MC opened up the challenge to the audience – many of whom where posing with umbrellas to prevent drizzles of rain from ruining their perfectly applied makeup and hairdos. A handful of brave hearts tried but no one could flip the 1000lb tyre. Someone suggested that perhaps if there was a beer contest within the tyre contest there might have been a more enthusiastic response. The prize for this tyre flip was $1,000. Since individually no one was strong enough, pairs of contestants tried and eventually moved it. At this stage another competitor dropped out under the pressure.

The ultimate challenge was the truck pull. My small muscles grew tired from watching. Man after man tried to move a four-tonne open back truck containing a three-tonne forklift in the tray. All that moved was the men from standing position to the ground. Ants could have worked, picnicked and vacationed in the grooves of the truck’s wheels ­– the truck barely moved a centimetre.

A contingency plan had to be used. A smaller truck weighing about 2 tonnes was brought in with the 1000lb wheel in the tray. This time the rope was pulled like someone caught a heavy fish! Alas! Some action.

This was the perfect end to a long day. Good music, eye candy, muscles, and a few scattered showers. As a female, I felt left out since there were no events specifically for us but Mr. Lowe assured me that next year there would be a female division. This year was simply a male open trial. Mr. Lowe indicated he was impressed with the crowd’s response and is hoping to host the event next year in a drier part of the year.

Perhaps next year, there will be representatives from other Caribbean islands. Who knows, the next champ may also be headed to the 2020 Olympics in Tokyo!

Here is a breakdown of who ranks the Strongest Man: