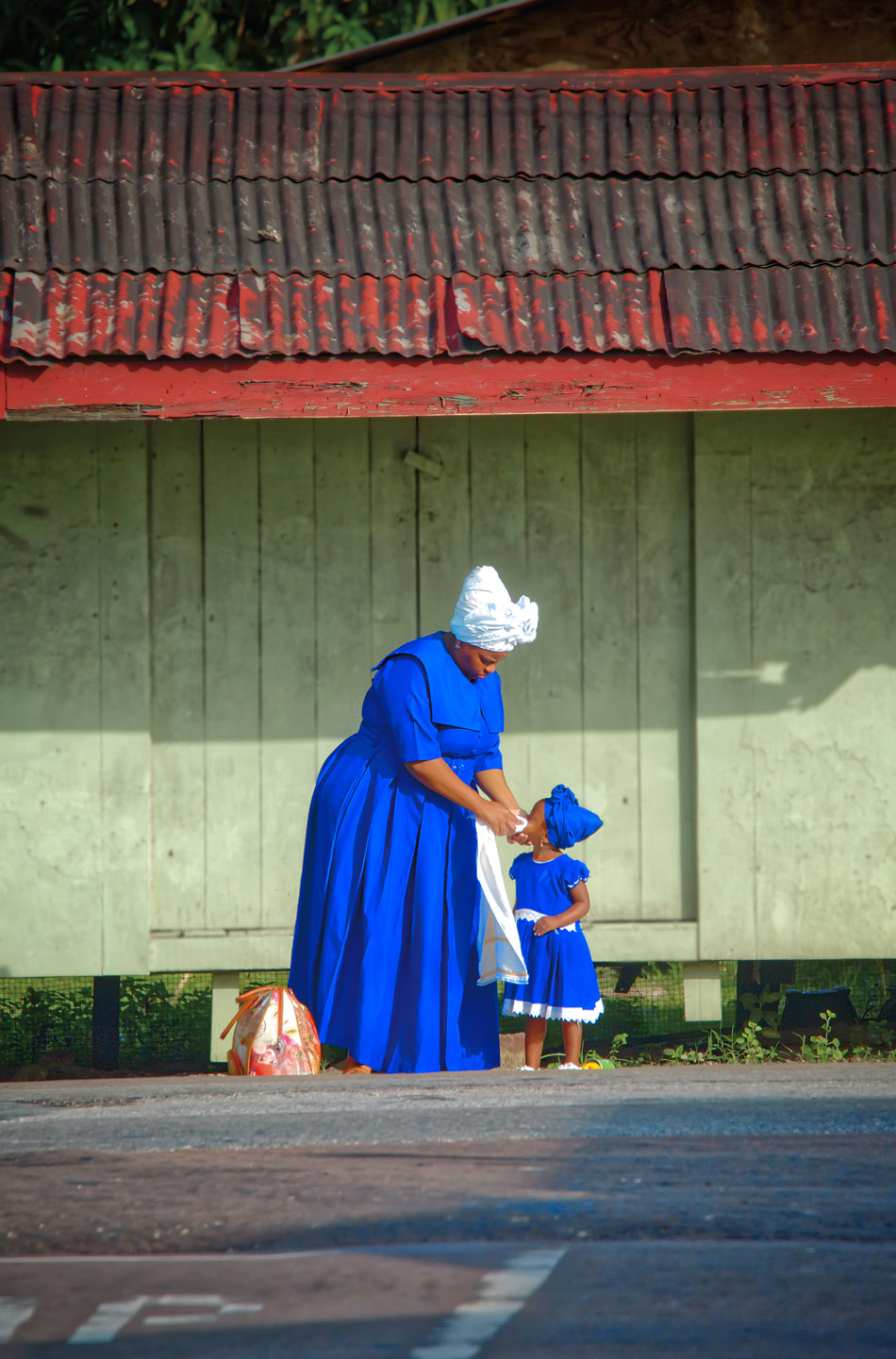 In 1917, the Ordinance was enacted and for 34 years this syncretic religion (a mix of Christian and African Orisha elements) was banned, ostensibly, for no greater reason than the loud sounds of their singing and clapping — and the perceived “threat” to colonial law and order. Though the law was repealed in 1951, there was no holiday recognition until 1996. The Baptists are also sometimes referred to as just Shouter Baptists or as Shango Baptists.

In the November/December 2017 issue of our sister magazine Caribbean Beat, author James Ferguson explored the history, in “Defenders of the faith“:

In 1917, eighty-three years after its abolition, the spectre of slavery still haunted colonial Trinidad and Tobago. The descendants of emancipated slaves far outnumbered a small white middle class and an even smaller elite, and were joined by African-descended migrants from other smaller and poorer territories in the Caribbean …

Of particular concern to the colonial authorities was the resilience of African influence in many forms of popular culture. Memories of slave insurrections and, more recently, post-Emancipation conflicts remained strong, and the idea of African-based customs and communal activity was anathema to those in power. Perhaps the most conspicuous of such cultural expressions was that of the Spiritual Baptist Church, and so it was that one hundred years ago, on 17 November, 1917, the legislature of Trinidad and Tobago banned a self-professed Christian religion.

The decision may seem odd by today’s enlightened ecumenical standards, but it was entirely consistent with the contemporary colonial mind-set. The problem with the Spiritual Baptist Church was not that it claimed to be Christian, but that it was explicitly African in inspiration and practice, and as such was deemed to be undesirable.

The church’s roots were eclectic, mirroring the colony’s ethnic diversity. Baptism had first come to Trinidad in the wake of the Anglo-American War of 1812–15, when so-called “Merikins,” former American slaves who had fought on the British side against the fledgling United States, were settled in the Company Villages in the south of the island. Their brand of Baptism, originating largely in the southern slave states, certainly reflected the experience of the African diaspora, and when missionaries from London Baptist societies visited Trinidad in the early nineteenth century they were struck — and alarmed — by what they saw as “primitive” forms of worship.

Perhaps the most distinctive feature of the Spiritual Baptists’ services was the uninhibited shouting used as a form of expression. As Frances Henry remarks in Reclaiming African Traditions in Trinidad, “The practice of the religion also includes ‘baptism, proving mournin’’; the phenomenon of possession by the Holy Spirit; the physical manifestation of possession in the shaking, dancing, speaking in tongues; and bringing back spiritual gifts.” This fundamentally vocal element led practitioners to be known, rather pejoratively, as Shouter Baptists.

Baptism rituals, as with mainstream churches, were important, but more unique was the “mournin’” process, in which initiates are deprived of food and water, their eyes covered, as they sit or kneel on bare ground for up to a week. This is thought to allow them to experience a symbolic death and resurrection, whereby their old sins are cast out and a new beginning is possible. This, together with the use of symbolic colours, bells, flags, special robes and headdresses, chanting and, of course, shouting, had little to do with the Baptism practised in nineteenth-century London, and if anything it had strong similarities — especially in the idea of spirit possession — with Haitian Vodou and Cuban Santería.

To those used to the genteel rites and liturgy of the Church of England, such practices were doubtless outlandish and threatening. Fears concerning obeah or black magic persisted from the era of slavery. Previous legislation had already proscribed any form of “African” religion, while the playing of drums was outlawed in 1883. In the month before the Shouters Prohibition Ordinance came into law, the Port of Spain Gazette fulminated against what it saw as “a body that has mistaken noise for enthusiasm, and shouting for religion . . . it has long since degenerated into a burlesque upon religion and a general nuisance to every community where it has squatted down and deceived the feeble-minded.” With the aim of suppressing this unwholesome reminder of the past, the Ordinance prohibited, among other things, the ringing of bells, holding candles in public places, and shaking of any sort. Taking part in a Shouter service, using a property for that purpose, or obstructing the police would result in a fine of $240.

Prohibition rarely works in the way intended, and the law seems to have done little to dissuade the Spiritual Baptists from practising their religion. Many arrests were made, and most charged with contravening the Ordinance were fined. The case of one Teacher Bailey, recalled on the excellent Obeah Histories website, is perhaps typical of the defiant attitude shown by the Shouters. He and thirteen others, according to the Port of Spain Gazette, were accused of taking part in a meeting in Perseverance Village near Couva. “‘Teacher Bailey’ appeared with his head bandaged around with a white cloth, a cross firmly pressed against his breast, and a huge Bible encased in red cloth. When asked whether he was guilty or not, Bailey exclaimed with cross uplifted: ‘I will only answer such a question if it comes from Christ; but not from any man.’ A plea of not guilty was recorded.”

The apparently lenient judge reprimanded and dismissed the thirteen others, but Bailey was considered responsible and fined five shillings — which was paid by his supporters, some two hundred of whom accompanied him away from the courthouse. He remained unrepentant:

My father is fifty-eight years old, my mother forty-nine, and from the time I was born, twenty-seven years ago, that is the religion I found my mother and father following — not shouting, but praying in the name of the Lord. (Holding his cross uplifted, Bailey proceeded to say:) I am prepared to go to jail every time, and to carry on these meetings, I will always do so. Christ was persecuted for religion, and if I go to jail for religion, it does not matter.

A system that jailed individuals for religious convictions was clearly unsustainable, yet the Shouters Prohibition Ordinance remained on Trinidad and Tobago’s statute book until 1951. Then, with the rise of anti-colonial and nationalist sentiment in the run-up to Independence, this relic of anti-African prejudice was ditched. Prominent among those pressing for the repeal were members of the new Legislative Council, elected by universal suffrage, such as Albert Gomes and Uriah “Buzz” Butler, himself a Spiritual Baptist preacher.

In 1995, the government went a step further, granting an annual holiday on 30 March in honour of the Spiritual Baptist movement. The religion thrives today, claiming between 100,000 and 200,000 adherents among a population of 1.3 million. In modern, multi-ethnic Trinidad and Tobago, it has reclaimed its place as a religion among equals as well as an indigenous faith, as expressed by the government’s National Library website:

Although the origins of the Spiritual Shouter Baptist Faith in Trinidad and Tobago can be traced to foreign countries, it has evolved over time to become a unique, indigenous religion. It has managed to fuse the spontaneity and rhythms of Africa with the restrained, traditional tenets of Christianity to produce a religion that is vibrant, expressive, and dynamic.