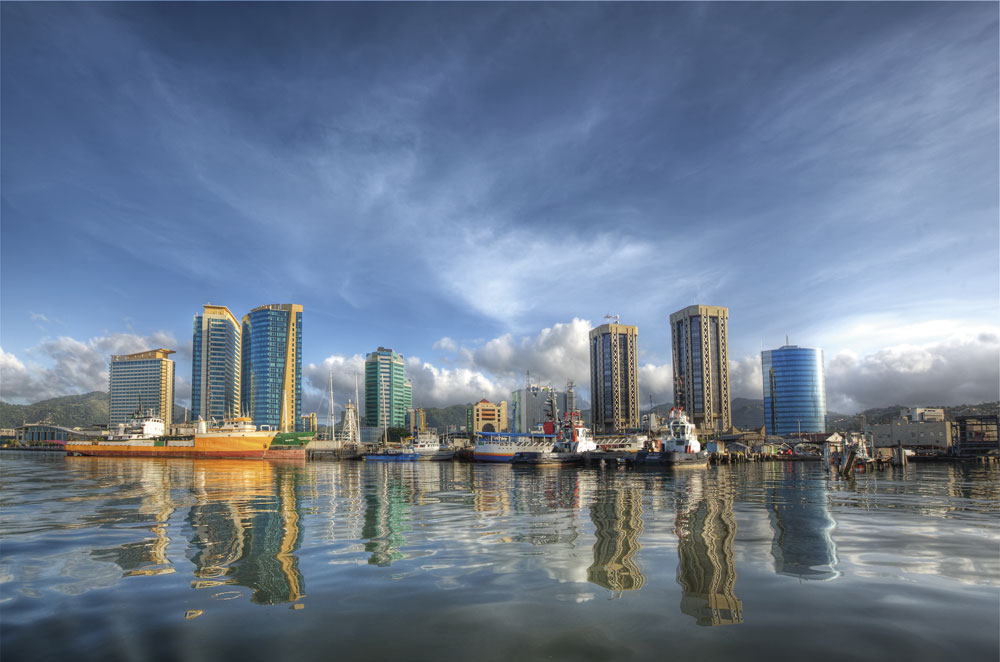 “When in Rome”, they say. Here is some info to help you get what you need quickly and easily while in Trinidad and Tobago. We’ve also got the information you’ll need in case anything goes wrong, so that nothing will spoil your holiday or vacation.

Our tropical twin-island republic lies in the Caribbean sea a few miles off the Venezuelan coast. Trinidad is the southernmost island in the Caribbean island chain. Both islands were once an extension of the South American continent, and our flora and fauna reflects this geographical link.

Trinidad & Tobago’s time zone is GMT/UTC -4 or EST +1. It shares the same time zone as the east coast of the United States from “Spring Forward” until “Fall Back”.

Most people practise some form of Christianity (22% Roman Catholic, 32% Christians of other denominations — including Anglican), while 18% are Hindu, and 5% Muslim. The Orisha faith, the Spiritual Baptist faith, Rastafarianism, the Baha’i faith, and Judaism are also practised.

Commercial oil production in Trinidad dates back to 1908. Such natural resources and a large population by Caribbean standards, combine to create one of the larger economies in the region — unless oil is trading low, as it periodically does. At its peak, oil and gas accounted for about 35% of GDP (over 40% at its peak) and 80% of exports, but only 5% of employment. For the first time in its history, Trinidad & Tobago was removed from the OECD’s Development Assistance Committee (DAC) list of aid recipient countries in 2011. The list excludes countries which have met a “high income” threshold for three consecutive years.

Businesses usually operate 8am–4pm or 9am–5pm Monday–Friday, while malls typically operate 10am–6pm or 7pm, Monday–Saturday. Businesses typically close on Sundays and public holidays, though there are exceptions. Some malls also open on Sundays close to Christmas.

Driving is on the left. Trinidad speed limits are 80kph (50mph) on highways and 55kph (34mph) in settled areas. The speed limit is 50kph (32mph) in Tobago. Seatbelts are required at all times by law, and using (e.g. texting on) or speaking on a mobile/cellular device without handsfree is illegal. Visitors can drive up to 90 days on valid foreign/international licences. Defensive driving in both islands, especially Trinidad, is imperative.

Tap water is deemed safe to drink (boil and filter to be safer). Bottled water widely available, though do opt for pure spring water (rather than purified water), and recycle the plastic bottle at a nearby PlastiKeep or other recycling locations such as iCare.

The country code is +868 (1868 from the US; 001868 from the UK). The Telecommunications Services of Trinidad & Tobago (TSTT/bmobile), Flow (Cable & Wireless) and DigicelPlay provide landline telephone services, which supply local and long distance service. Prepaid international phone cards are also available. bmobile and Digicel operate on GSM networks; prepaid SIM cards are available for unlocked phones. Kiosks and points of sale abound, especially at major shopping centres and ports of entry, such as Piarco Airport.

TTPost is the privatised, national mail service, operating both local and international postal services. International couriers like FedEx, DHL, UPS and others also operate. Many SkyBox, freight forwarding, and online shopping services import and delivery items locally which have been purchased overseas.

There are 38 FM stations. For all-local fare, try WACK (We Are Culture Krazy) 90.1FM

A note on safety & security

The vast majority of people in Trinidad and Tobago like to enjoy their day, complete their business (or pleasure), and sleep well at night. But, as in most parts of the world, crime is a concern.

The usual precautions apply, e.g. do not carry large amounts of cash or valuables; don’t flaunt tempting jewellery; keep an eye on bags and laptops; don’t leave wallets and purses visible in back pockets or handbags; lock car doors; avoid isolated places and situations, especially after dark; and be at least as alert and safety-conscious as you would be at home.

We recommend using certified and accredited tour guides and operators, especially in more remote areas. Remember that authorised, licensed taxis are identified by registration plates starting with “H”. Do not hesitate to seek current local advice and knowledge.