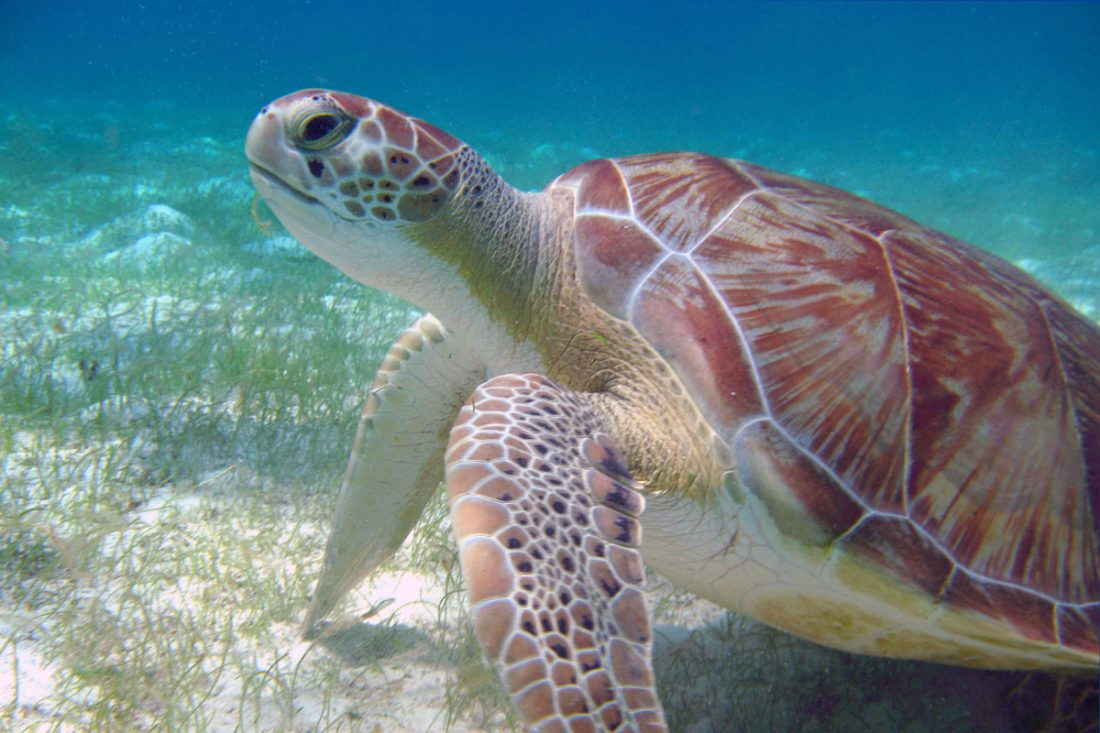 Green turtles can often be seen on sea grass beds where they feed. Photo by Rapso Imaging

The magic of turtle-watching in Trinidad and Tobago

When to go: the turtle nesting season

From March to September (and sometimes outside of these months), five of the seven sea turtle species found globally return to Trinidad and Tobago’s beaches to nest and lay their eggs. Several weeks later, baby turtle hatchlings begin to emerge from the nests as they make their way to the sea. During these months, Trinidad in particular takes on a very important role as the second largest leatherback turtle nesting site in the world is at Grande Rivière. This makes the island a very special location to go turtle-watching and to witness this awe-inspiring annual ritual.

Where to see turtles in Trinidad and Tobago

Grande Rivière, Fishing Pond, and Matura are well-known and protected beaches in northeast Trinidad. Turtle-watching tours are most likely to visit one of these locations, and require special, inexpensive permits. In Tobago, turtles frequent the beaches of the Leeward coast, especially Stonehaven and Courland (or Turtle) beaches. Learn more about turtle-watching in Trinidad here, and turtle-watching in Tobago here.

It’s important to note that popular north coast beaches in Trinidad like Maracas, Tyrico, Las Cuevas, Paria and Blanchisseuse are among those important nesting sites. In Tobago, popular beaches including Pigeon Point are also nesting sites, among many others. 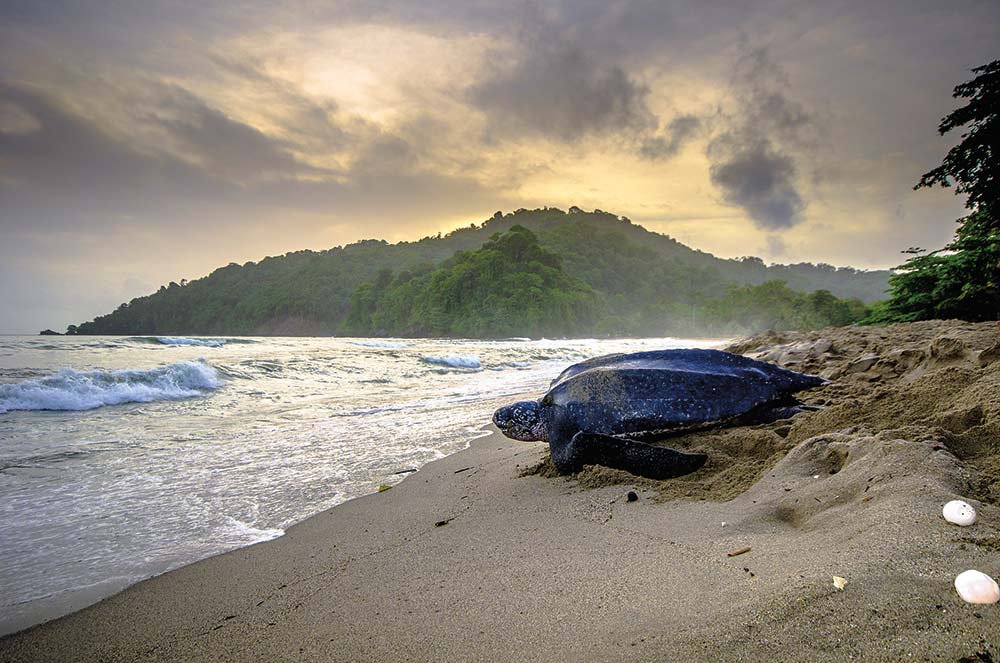 What to expect: the annual turtle nesting ritual

During nesting months, females heave themselves on to the shore, laboriously digging their nests in the sand before laying, then covering the eggs over and returning to the sea. Turtles are said to come ashore in greatest numbers late at night and during the full moon, though there are instances of nesting during daylight hours.

Two months later, the eggs hatch, and the baby turtles dig themselves out of their nests and hustle — awkwardly and adorably — to the open sea. Few survive the predators and make it to maturity, but those females that do then return to the beaches on which they were born to begin the cycle anew.

Depending on the location and the time in the season, turtle-watching may involve seeing nesting turtles, hatchlings or — particularly between June and August — both! 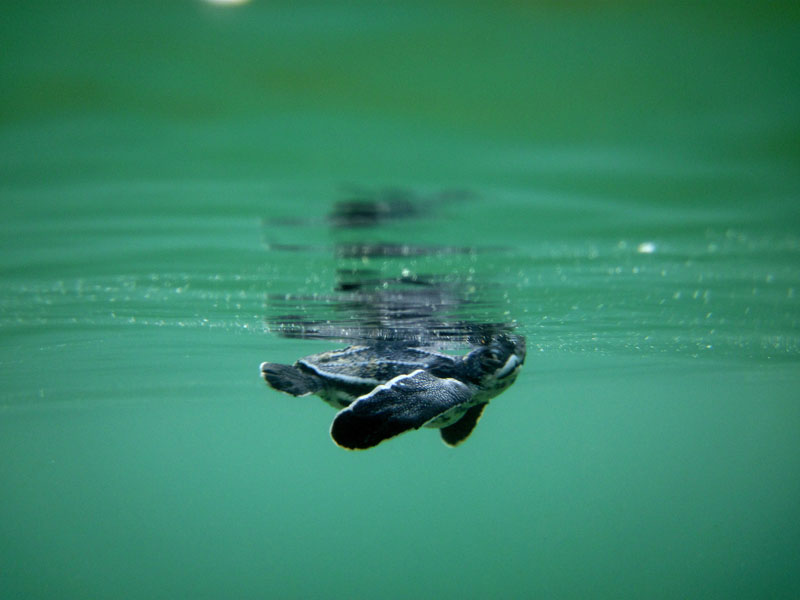 A critically endangered leatherback turtle hatchling takes a breath as it swims out to to sea at Mt Irvine/Back Bay. Photographer: Giancarlo Lalsingh/SOS Tobago

A giant among us – the endangered leatherback turtle

Leatherbacks are the largest surviving turtle species on earth. Some can reach up to 10 feet long and weigh up to 2,000 pounds. These reptiles can dive to depths of 4,200 feet — deeper than any other turtle — and can stay down for up to 85 minutes. The ones that survive to maturity can live on average 45–50 years. Once prevalent in every ocean except the Arctic and Antarctic, the leatherback population has declined dramatically across most of the world.

Female hatchlings that make it to the sea will roam the oceans until they reach sexual maturity at roughly 25-30 years old. Then they return to the same nesting areas to produce their own offspring, laying several times during a season and returning every two to three years. Males spend the rest of their lives at sea.

Turtle-watching tours with recognised groups like the ones listed in the next section are critical to conservation efforts and community education, so that Trinidad and Tobago can continue to be stewards of these beautiful creatures. 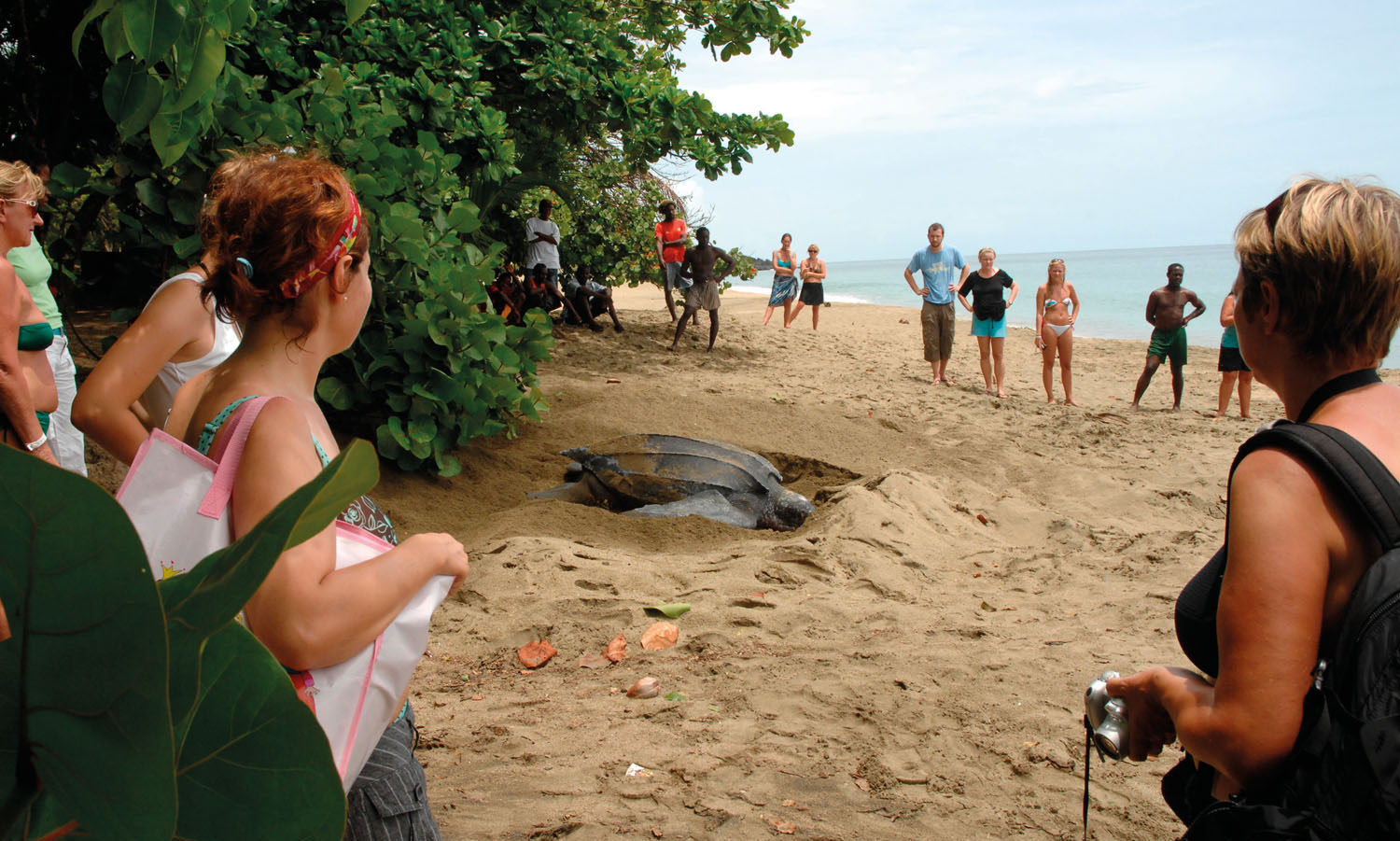 Access to nesting beaches, particularly Grande Rivière and Matura, is restricted to prevent poaching and to allow the turtles to nest and young hatchlings to emerge undisturbed. They already have to contend with fishing nets, sargassum, plastics, natural predators, disconcerting man-made light (they follow the light of the moon), human activity (including parties and vehicles driving on the beach), rising sea levels and coastal erosion, and poachers.

Reputable turtle-watching tour operators can arrange necessary permits and access. You can also choose to stay at a nearby hotel. The front desk there can arrange your permit and give you a shout when there are turtles sighted. It’s best to go with a guide, who can explain the nesting process and help ensure the turtles’ welfare.

The Turtle Village Trust (www.turtlevillagetrust.org, 638-5953/674-4213) is the umbrella body for the islands’ leading turtle conservation groups: