Carnival: so much more than two days

It’s 5am on Carnival Monday and you’re covered in thick, cold mud and precious little else. Your skin is tingling with anticipation and the cool morning air. Up ahead there’s a fourteen-wheeler pulling a trailer laden with music speakers, a DJ and his entourage. You’re dancing. You’re smiling. Welcome to Carnival!

For many “Trinbagonians”, Carnival is a love affair impossible to relinquish. Each year tens of thousands return home to join the masses of ordinary Trinis and visitors “on the road” for a two-day festival driven by intoxicating music. Carried along by constant rhythms, people shed their worries and inhibitions in a joyful blur of “freeness”. Some maintain that this is the world’s biggest street party, and if not in absolute numbers, it certainly is in spirit.

But Carnival has expanded far beyond its traditional climactic Monday and Tuesday to encompass a whole season. Costumes and “jumping up” in the streets are just the culmination of a long series of events, parties and rituals. Today, the Carnival experience begins for many as soon as the last one ends. Costume makers and soca artists, for instance, have already begun to transform the essence of one year into the possible designs and potential hit songs of the next.

The ritual of Carnival involves more than buying a costume and jumping in the streets. Let us initiate you into the customs of Carnival.

Though they are what some might call a dying breed, the opening of the calypso tents in the New Year is a sign that the season has officially begun. A “tent” is any venue where calypsonians perform nightly, showing off their new songs, gauging audience response, and perfecting their numbers for the big competitions. Though they are sparser than in days gone by, they give a good idea of how the season is shaping up, and if you’ve been away and lost track of the latest political and social scandals, the tents are an excellent place to become reacquainted. To go to a tent doesn’t necessarily mean that you are going to hear calypsonians sing underneath a tent, you may actually go to a theatre, Queen’s Park Savannah or even the Hasely Crawford Stadium.

To truly experience the essence of Carnival, you must take in the sweet music of steel bands. These community-based orchestras play various kinds of steel pan, the metal music drum invented in Trinidad around World War II. You can visit the various panyards around the country. On the nights where they maybe practising for the upcoming competitions entrance will be free – just support the local vendors – but once you visit on the night when preliminary judging is taking place the panyards usually charge a nominal fee to aid in their upkeep.

The climax of all this practice is Panorama, the national steelband competition, one of the most keenly anticipated events of the season. The final at the Queen’s Park Savannah is the epicentre of the pan world. One 100-member steel orchestra after another wheels out into the “big yard”; the music starts; the flagmen and flagwomen wave their flags, thousands of fans dance, and the players pour heart and soul into their melodies and harmonies and rhythms until the air can’t contain any more sound. Not to be missed.

From band launches the previous summer to an almost daily list of parties in the final few weeks before Carnival, they are the place to learn the new tunes and hone your “wining” technique. The sheer energy and enthusiasm of the soca-drunk throng is like a force of nature. For those of you who have never experienced our Carnival, a fête is a big party, usually held outdoors or at one of our many nightspots. It consists mainly of a DJ playing recorded music or sometimes there is a live band performance. A Carnival fête however is quite different from an ordinary fete. Why? Because it’s all part of the season’s festivities and at almost all of these Carnival fêtes, there is guaranteed live entertainment. The week leading up to Carnival is infectious, with a major fete every night – many of them “all-inclusive”, i.e. food and drinks provided as part of the admission cost – and the tempo never drops. People party every night and still make it to their day job in the morning. This is the week when your stamina must be tip-top, when the spirit of Carnival becomes truly inescapable and sleep an afterthought.

Now you might think that Carnival is only for adults, with the panyards, the fêtes and two big days of the masquerade. This is not necessarily so. The children also have their time on the streets of the capital. Carnival Saturday is the day when all children’s bands take to the streets and head for the Queen’s Park Savannah where their costumes will be adjudicated to determine who will earn the prestigious title of band of the year.

The highlight of the calypsonian’s year is Dimanche Gras (Big Sunday), the day before Carnival officially begins. Crowds throng the stands to hear exponents of calypso sing social commentary songs, or party songs on having a good time. The winner is crowned Calypso Monarch. Soca singers replace the sounds of Christmas with their new songs for the festival, in the hope of producing the most popular song for the season, the Road March, or being crowned International Soca Monarch on Carnival Friday. With tenor, bass, guitar and cello pans, plus drum kits and assorted percussion, they make a joyful noise in almost any genre. Their biggest challenge is the annual Panorama, a month-long competition judged in rounds and culminating in a national final. Other important Carnival competitions include the Chutney Soca Monarch. Each has early rounds to excite fans’ interest and rivalry, before culminating in finals the week before Carnival.

At 4am on Carnival Monday morning, Carnival finally begins with J’Ouvert (French Patois for “opening of day” and pronounced ju-vay), when wild devotees of the Merry Monarch are finally unleashed. Preparations for J’Ouvert are always cloaked in darkness, to give that semblance of role reversal, where those in positions of power are mocked by those who either work for them or are in lower positions. J’Ouvert is not about pretty costumes; it’s about mud, cocoa, oil, devils, and “picong”, an inversion of normality and the relentless mocking of power and respectability. It is Carnival at its most primal. Men dress as women, women as men, grown-ups in baby’s diapers; “respectable” bankers and businessmen drape themselves in chains and torn clothes, paint and mud covered devils menace passers-by – but it’s all in good fun, a chance to enjoy being wet and messy, licence to “get on bad”. Don’t be afraid to plunge right in, but take some sensible precautions: wear old clothes, don’t take jewellery or valuables with you, stay with a group of friends, preferably in an organised J’Ouvert band – and be prepared to shed your inhibitions. As the sun begins to become full-fledged in the sky, the muddy and oily masqueraders look for their homes to wash off in order that they ready for an afternoon of pretty mas. 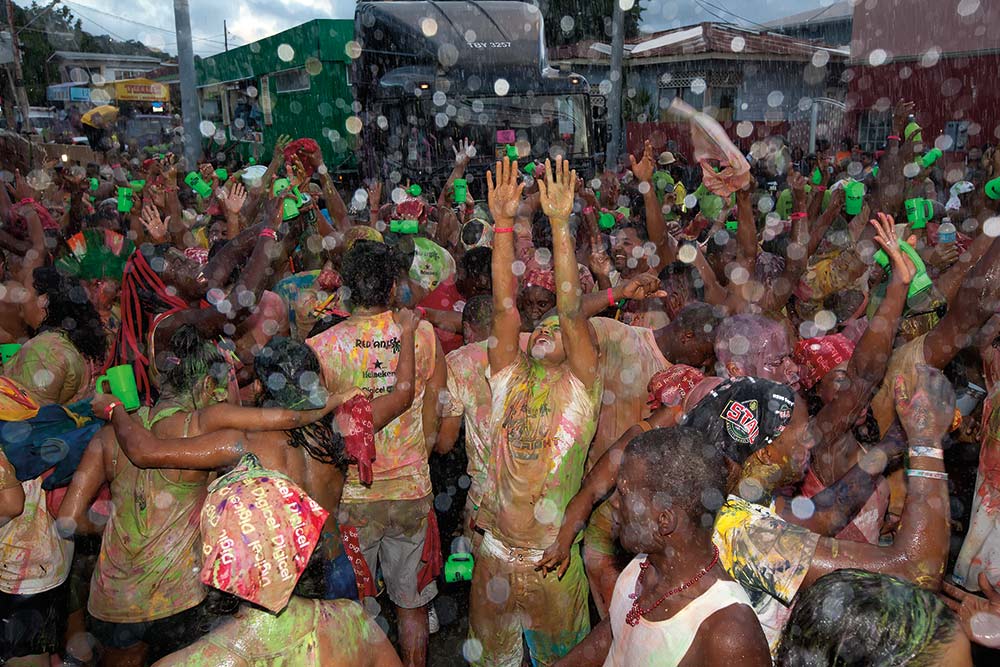 Well after the sun has come up on Carnival Monday morning, revellers start to head home for a few shorts hours of sleep and refuelling (eat whenever you can over these two and half days) before heading back to the streets. For Monday mas, you don’t have to wear your full costume — in fact, some bands now give their masqueraders special Monday garb. Look out for bands of traditional Carnival characters – fancy 18 sailors, black Indians, and midnight robbers with their long-winded “robber talk”. For those who simply can’t get enough, Monday Night Mas in St. James carries the partying through the night, but most masqueraders make sure they get enough sleep to prepare themselves for the big day ahead.

Carnival Tuesday is the day everything else has been leading toward. Months of preparation and effort, anticipation and excitement erupt into “pretty mas” as tens of thousands of revellers clad in spandex, colourful cotton, beads, sequins, feathers, and every other conceivable material take over the streets of Port of Spain in competition for the Band of the Year title. With weeks of partying behind them, many masqueraders by now are running on pure elation, sustained by the music and the desire to make it to the big moment when their band crosses the big stage at the Queen’s Park Savannah. For a while the stage will be theirs; for a while they know they’re the centre of the world. Tuesday begins at 6:30am, where there is that hustle to meet your band to begin the day’s events of parading in the streets for 24 hours. It’s an experience that can’t be put into words.

Flash forward to 11pm Carnival Tuesday night. You’ve lost the feathered headpiece you started the morning wearing. Your feet ache and you suspect you may have sprained something in the region of your waist. There’s a song pounding in your head, and you’ve lost count of how many times you’ve heard it over the past two days. You can’t stop smiling even though you know Carnival will be over in an hour.

You have been ceremoniously inducted into our Carnival ritual. After all of this how could you not celebrate in this festival? 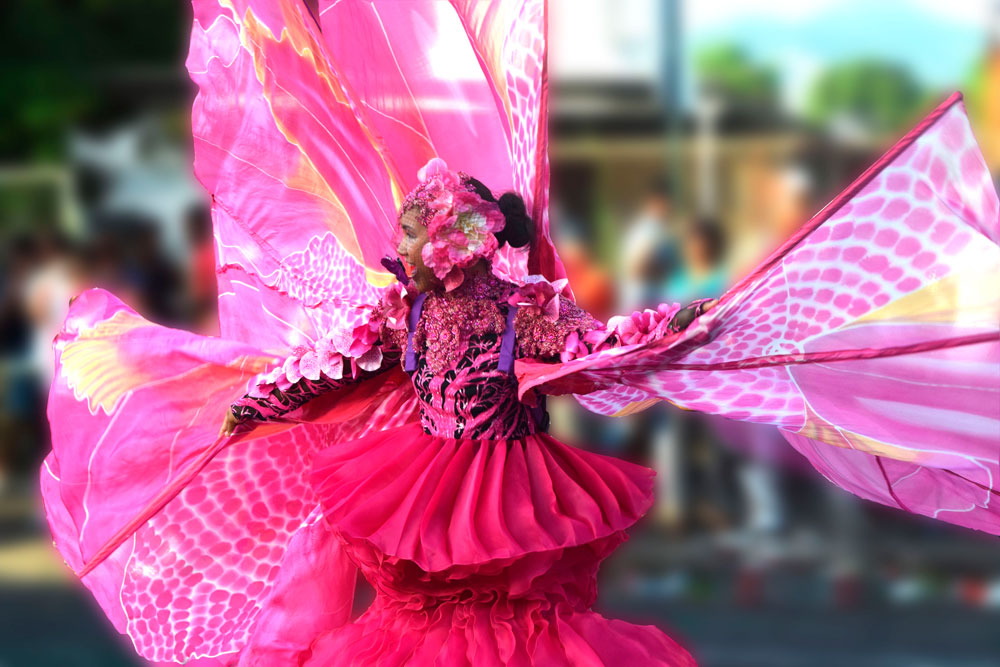 A masquerader from K2K Alliance and Partners’ “Searching for Shangri La”, the 2016 band of the year (medium). Photo courtesy K2K