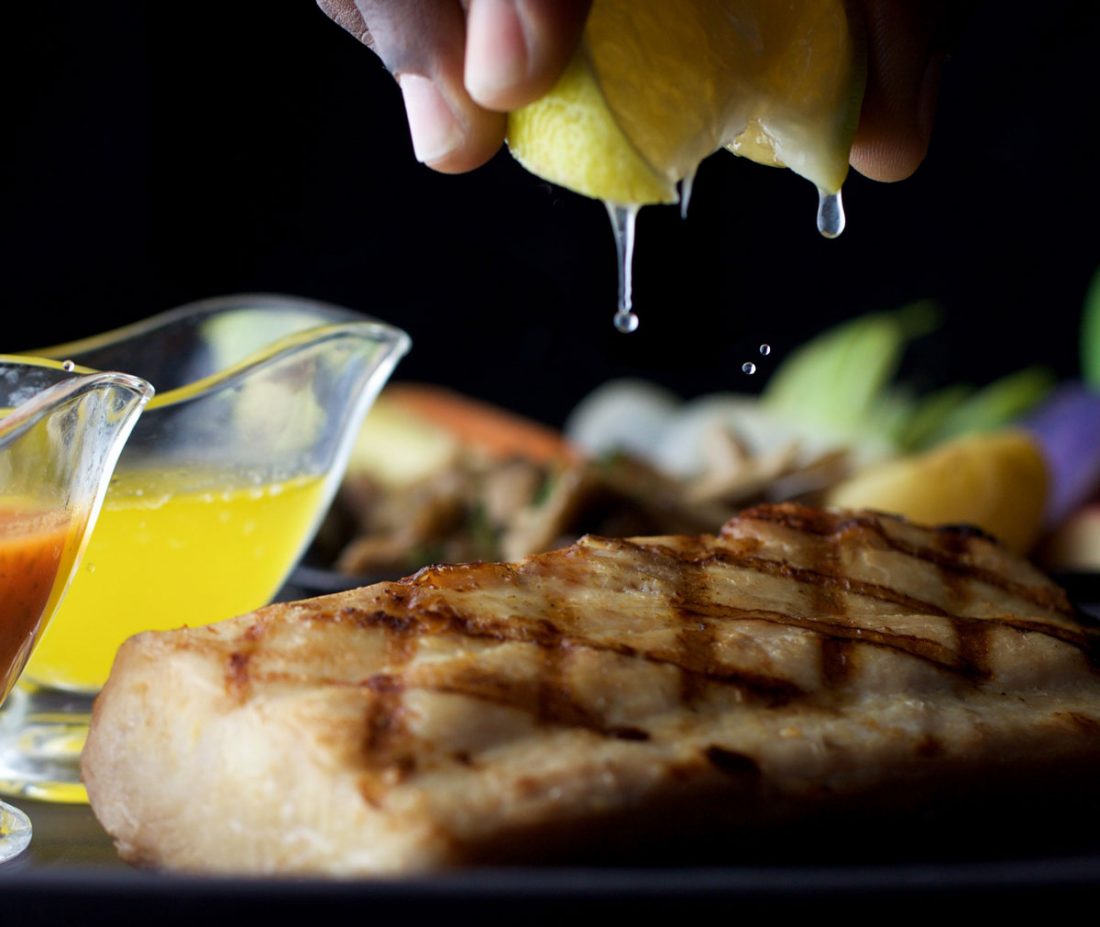 Catch of the day at Aioli restaurant

Fine food, finger food street food, & everything in between

So yes, Trinidadian food is amazing. You could, in theory, never eat the same thing for a month in Trinidad. From creole to Caribbean fusion, Indian to Italian, the smorgasbord of cuisines on these islands is staggering.

Trinidadians love their food, and it’s easy to understand why. Drawing on the culinary skills and traditions of all the many ethnic groups on this cosmopolitan island, Trinidad’s cuisine can’t help being distinct, tasty, and full of surprises.

In fact, in Trinidad, it’s as if every day is a feast. To enjoy the feasts of Trinidad, come with an open mind and an adventurous palate. From haute cuisine to roadside hut cuisine, Trinidad takes gastronomes on a culinary world tour.

The restaurant scene has been blossoming in Trinidad in recent years. Most of the fine dining restaurants are in and around Port of Spain (mainly Woodbrook) and San Fernando, with a few in the east and central Trinidad. The finer chefs at the top restaurants have worked internationally, and tend to experiment with local ingredients in Caribbean fusion dishes, while others are content to take the traditional Creole cuisine to dizzying heights of delectability.

European styles include Spanish, French, English and Italian. Lebanese, Japanese, Thai, Korean and Hakka (Indian/Chinese) have also been added to the never-ending list of culinary options in T&T. Even health nuts are catered for, with salad bars cropping up on the every-trendy Ariapita Avenue in Woodbrook (a suburb of Port of Spain). In a culture that adores wild meat and rich gravies, things like olives and spinach have always been bystanders to the main course. Nowadays though, words like organic and vegan are being bandied about, and more menus are tapping into the many fruits and veggies available year-round.

You can come across some magnificent establishments tucked away from the hustle and bustle of major towns, but Ariapita Avenue is considered the island’s restaurant mecca. Delicious Asian, Creole, European, Middle Eastern, Jamaican and American food is conjured up here by superb qualified chefs.

Trendy combination restaurant/sports bars are a fashionable choice for dining and liming, especially when big sporting events such as football and boxing are on.

There is another world of elegant dining around Port of Spain and San Fernando. You’ll discover the inviting choices of Italian, Thai, African, authentic East Indian, Mexican, Syrian, Creole, European nouvelle cuisine, or maybe an international buffet offering food of a different country or continent each week. Take a tour around the world: try each in turn. Many new restaurants have opened in graceful buildings, preserving traditional style and architecture.

One Plaza at One Woodbrook Place

At the base of this iconic skyscraper, which is perfectly perched on the edge of Woodbrook and St James, a virtual one-stop shop for foodies has been created. Just minutes away from Ariapita Avenue, One Plaza at One Woodbrook Place is now a haven for restaurateurs – with its central location; tonnes of free, secure parking; Digicel IMAX complex; and celebrity clients (residents of apartments in the high-rise block, or their friends).

It was only a matter of time before Pizza Hut, for years the sole food outlet on site, got some serious competition. Now, the rapidly growing list of restaurants and cafés jostling for space at THE ‘des res’ in Trinidad include Chaud Café and Wine Bar (its highly rated big brother, Chaud Restaurant, is located around the Queen’s Park Savannah); The Port; Urban Oasis Café; Svaada, Samurai and Annie’s Chinese Restaurant, offering Middle Eastern (everything halal), Mediterranean, vegan, vegetarian, sushi, salads, sandwiches, pasta, gourmet burgers, tartines, strip steak, scallops, shrimp, octopus, squid, mussels, clams and the list is endless. And we haven’t even mentioned the desserts, which include warm apple crumble, banana beignets and chocolate espresso mousse.

What more could you want? Ah, yes, a little after-dinner conversation — over a hookah. Shesha Café & Lounge also provides the increasingly popular hookahs, complete with tobacco in flavours like grape, lime, apple and lemon mint.

If you are wondering where to find typical Trinidadian meals, you may have to be invited home! Simple menus include a starch (rice, potatoes, or ground provisions), small portions of meat, generous helpings of stewed peas or beans, and vegetables. Tradition dictates a Saturday soup (known as Sancoche), a thick and hearty combination of split peas, dumplings and ground provisions (roots such as yams, dasheen, eddo, cassava) flavoured with a piece of salted pork or beef (sometimes even turkey or chicken, for the health-conscious). Saturday evenings, you might expect souse or steaming black pudding. Sundays are time for callaloo, stewed chicken and macaroni pie.

At the Port of Spain port there are a number of local cooks well-known for their “sweet hand” in preparing local fare at Femmes Du Chalet (formerly known as the Breakfast Shed, and few Trinidadians call it by its new name). You’ll find fish slices stewed in tomatoes, served with coo-coo (a cornmeal paste, like Italian polenta) and callaloo; stewed red beans; and slices of yams, plantains and breadfruit.

Street food is a big part of our culinary culture. In fact, some of the best foods in Trinidad are bought from roadside vendors and eaten with your hands. Doubles is perhaps the leading roadside delight, a favourite of the breakfast and late evening crowds. Your visit would not be complete without eating a doubles streetside. Vendors set up at designated places like Piarco Airport, St. James, Woodbrook, Curepe, on Long Circular Road, etc., to offer this savoury of curried chick peas between two barra. You’ll find the most popular doubles vendors surrounded by a crowd between 8 and 9:30am. If you have a sensitive pallet or stomach, make sure to tell them no pepper. If you’re on the fence, ask for “a doubles with slight pepper”.

Roasted corn, corn soup, oysters (careful with these, though), coconuts and souse can be found around the Queen’s Park Savannah at night. Local fruits, once in season, can be bought at supermarkets, on the sidewalks and even at traffic lights, where some vendors ply their trade at your car window.

In some areas (notably St. James and San Juan) you’ll also come across interesting vegetarian selections, including an array of milk-based punches. Chase your street meal with some fresh coconut water, drunk straight from the nut, and for dessert, try a cup of home-style ice cream — flavours include coconut, Guinness (yes, the drink!) and soursop.

Another popular Trini on-the-spot food is roti. It is a kind of Indian flat bread sometimes filled with finely ground split peas cooked on a tawa (griddle), then used to wrap a serving of curried meat, shrimp and/or vegetables. Many offer this already-wrapped version, or serve the vegetable and meat sauces on the side to be dipped up with pieces of paratha (also known as buss up shut), a large silky roti that is pummelled and torn into soft flaky shreds. Be willing to use fingers instead of a fork! Go easy on the pepper sauces or chutneys which may be offered. Trinis like their food peppery! There’s also the plain bready kind, sada roti, which can be stuffed with choka (sautéed and simmered tomatoes), baigan (eggplant), bhaji (spinach), or smoked herring. A wider variety of Indian snack foods is available from vendors at the old trainline in Debe (on the Siparia-Erin road).

If you become hooked on this Trini “street food”, you can haunt all of the places mentioned and really dig in to the variety of offerings. Take a walk in St. James along the Western Main Road. At different street corners, in addition to roti, you will find lots of that home-made ice cream, fresh baked bread or barbecue. Around the Savannah, you can also buy coconut water straight from the shell, fresh fruit, phulorie balls, boiled or roasted corn (in season), and barbecue. On the highways and byways, especially in the countryside, look for fresh fruit, vegetables, honey and local delicacies.

Maracas Beach is the “shark-and-bake* centre of the world”. It is here that the art of seasoning fish fillets in a tangy lime marinade, then deep frying them to be stuffed into a fry bake and spiced with your choice of garlic, pepper or shado-beni (cilantro) sauce, was developed and perfected. Not many other beaches have developed either the connoisseurs or the tradition of cooks to challenge Maracas for the best shark-and-bake* feast! To other beaches, or on river limes, Trinis go prepared with their own pots, which usually means pelau (a rice dish with meat and peas cooked together and topped off with a flaming hot congo pepper). Or you might expect a pot of curried duck cooked over a coalpot right there on the bank or beach. Rum is never far away.

*Sharks are no longer plentiful in Trinidadian waters, and efforts are being made to curb overfishing. As such, popularity and fame notwithstanding, shark and bake may no longer be in the best interest of Trinidad’s fragile marine ecology. In addition to man’s appetite for delicious things, there is another threat to Trinidadian sea life: the lion fish. This invasive species lacks predators in Caribbean waters and its numbers are rising rapidly. There are ongoing initiatives to persuade locals and visitors across the Caribbean of the lion fish’s potential as a tasty snack. Man’s appetite for delicious things could yet be a solution rather than a problem. If the opportunity arises, do your bit for Trinidad’s environment: eat a lion fish, not a shark.

Festivals and family celebrations are always occasions for feasting. If you have the good fortune to be invited to a Hindu wedding, you will have at least three days of feasting, if not two weekends. The bride’s family hosts one feast; the groom’s another; and the final feast, bringing everybody together, is likely to include the whole village as well. Meat and alcohol are not usually served at Hindu weddings, though. It is tradition for the food to be served on banana leaves.

Other festivals have their trademark foods, as well. At Christmas, turkey, ham, pastelles, ginger-beer, sorrel and garlic pork are traditional. For Carnival, pelau, ham and hops, buljol or smoked herring and bake. Beers and other alcoholic beverages are available streetside. Fetes and calypso shows attract street vendors opening fresh coconuts, ladling out cups of corn soup, or offering boiled corn on the cob. Lent still signifies a period of fasting and many fish meals. Steaming tangy fish broths are favourites during this period.

A weekend visit to the Central Market in Port of Spain off the Beetham Highway, or the Chaguanas Market, presents the cornucopia of fruits, vegetables, and seafood in season. Trinidad’s seasons are marked by fruit as much as by food. From May to August, mangoes are plentiful: tiny golf-ball sized Dou-douce (as sweet as its French name suggests); Starch (not at all starchy); smooth fleshy Julies; enormous Grahams (also called “bellyful”); and a huge assortment in between. Mangoes, however, do not last a long time after they’ve been picked, ripening quickly in the tropical climate. Avocados ripen in this season, too. Forest fruits include balata, sapodilla, sugar apples, all characterised by smooth black seeds like a plum’s. Pawpaws (papaya), watermelons and pineapples are available all year round. Pommeracs (a fragrant, juicy, pear-shaped red fruit with a single seed) usually bear in two seasons, mid-year and at Christmas.

All in the location

Sometimes it’s as much about the where as the what. In St. James, on the western edge of Port of Spain, nightfall brings out sidewalk vendors selling grilled fare, burgers, roti, corn soup, souse and ital food. People trek from all over the country to San Fernando to partake in Halal meats barbequed over coals and served with fries, salad and garlic rolls. In Debe village, just outside San Fernando, people throng to small wooden huts for sumptuous Indian delicacies.