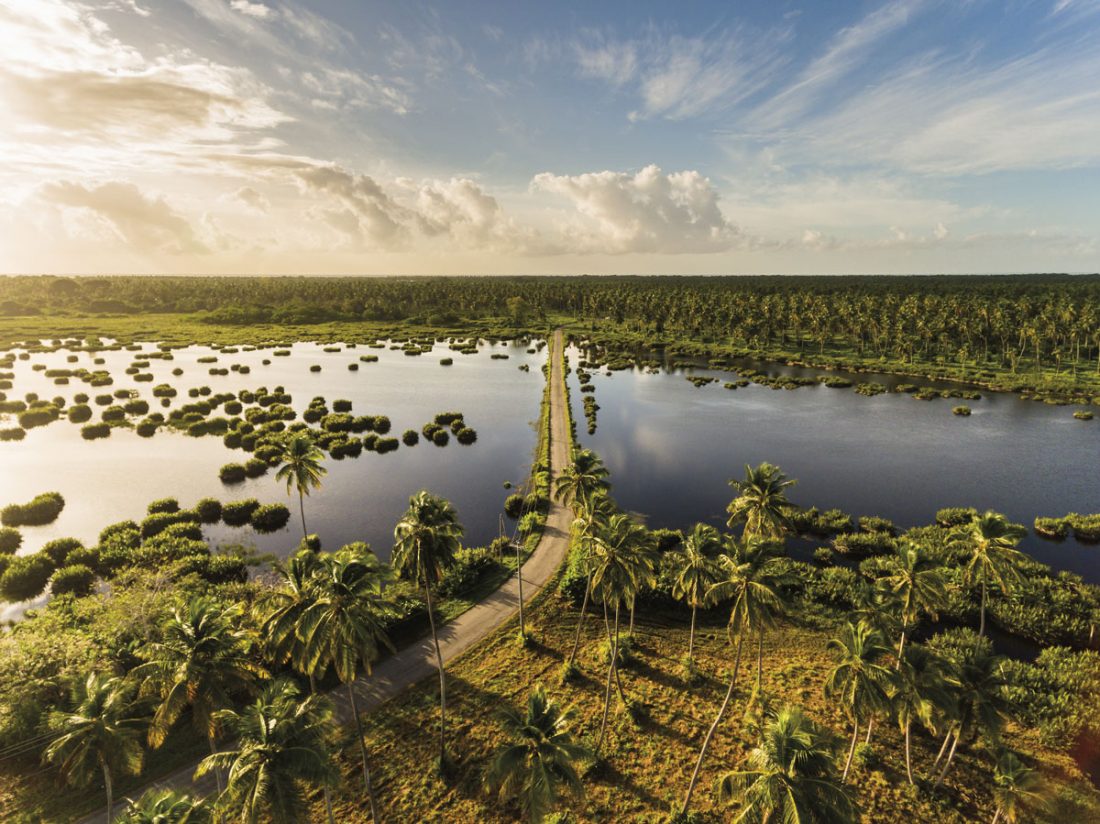 The great Icacos lagoon is bisected by a narrow road leading to the CGA Ltd's coconut estate and further to the town of Icacos. Photo by CGA Ltd (the Coconut Growers Association)

South Trinidad is in many ways the backbone of Trinidad. The oil which (literally) has fuelled Trinidad and Tobago’s rise as the most developed country in the Caribbean, comes from here; and the fight for workers’ rights began here back in the 1930s. The “Black power” movement of the late 1960s and early 1970s, also had its origins in the south. Southerners like people to understand that San Fernando is the country’s “industrial capital”. Although the pace of life is hectic in some parts (and the traffic can be as hellish as all urban centres on the island), the south generally cannot compete with the hustle and bustle of the north. Southerners are, Trinis will say, more laid back, and everything from the landscape to the way businesses operate reflects that.

South Trinidad — the South or the Southland — covers everything south of a line drawn across the island from San Fernando. Then you are suddenly face to face with some massive industrial operation: oil at Guayaguayare, natural gas liquefication and export at Point Fortin, all with various downstream operations attached. Trinidad and Tobago has by far the largest resources of crude oil and natural gas in the Caribbean (with the exception of recent discoveries in Guyana), and has been busily monetising them for over a century. The big Point Lisas industrial estate a few miles north of San Fernando has already made the country a world leader in methanol and ammonia.

Once you leave San Fernando head further south, driving can become challenging as the roads are winding and narrow and in varying states of repair (though recent roadworks and projects have sought to address that) — including plans to complete the  construction of a highway to Point Fortin. If you have an adventurous streak, you will enjoy chance encounters in neighbourhood bars and shops, and exploring the beaches on Trinidad’s south coast. Your route will frequently take you through forest clearings where pumps rhythmically bring oil out of the ground to small tank farms.

Beyond San Fernando, the South Trunk Road leads to the village of La Brea.

The result of a fault in the sandstone 250 feet down, through which crude oil or bitumen seeps. The pitch has been exported for decades, for use on roofs and road surfaces. One of only three natural asphalt lakes in the world (the other two are in Venezuela and California, and there are reports that Trinidad’s is the largest), the Pitch Lake is a dark mass of slowly churning natural asphalt. It looks like an abandoned car park, and you can walk easily on the surface; but a car would start sinking quite quickly into the pitch. Swallowed objects may reappear years later as the pitch slowly swirls. The First Peoples or Amerindians of Trinidad are said to have believed that the Pitch Lake was created by the Good Spirit to drown a village whose people had sinned by killing too many hummingbirds. In 1595, the British adventurer Sir Walter Raleigh patched his leaking ships with pitch from the lake, and was pleased to find it did not melt easily. A small museum contains First Peoples artefacts found at the lake. Open daily from 9am to 5pm. Admission fee includes a guided tour. The La Brea Pitch Lake Tour Guides Association operates the visitor facility. T: 651-1232.

In the heart of oil country, the site of Labour Day observances every 19 June. It was the location of oil riots in the 1930s which were significant to the birth of unions for oilworkers.

A few minutes beyond La Brea, one of the best southern beaches, with calm Gulf water and visitor facilities.

Another 10 or 15 minutes bring you to Point Fortin, now the centre of the LNG industry, and host of the island’s “second Carnival” each April/May at the Point Fortin Borough Day celebrations.

After this, the road winds through woodland for a while, passing a turn-off to the popular Granville Beach.

About two hours driving from San Fernando, you approach the southwestern tip of Trinidad: the fishing village of Cedros, a few miles of coconut plantations (a turn-off to the right leads to the broad sweep of Columbus Bay and its idyllic beach). At Cedros Point, you can walk out on Trinidad’s widest beach when the tide is out. Behold vast vistas across beach and sea to the Venezuelan Main. Columbus Bay is where the explorer is said to have landed on 31 July, 1498; you can see the Venezuelan coast from here on a clear day.

The Southern Main Road continues through the Cedros peninsula to Trinidad’s toe at Icacos. Deposits from silt-rich river currents off South America is adding land to Icacos, where the mooring for schooners now lies among vegetation some hundred metres inland. On a clear day, from Icacos you can see the Venezuelan coast. From this extreme tip of Trinidad’s south-west peninsula, the South American continent is a mere seven miles away. Fish can be bought straight off the boats that come ashore at Icacos, and fishermen often have stories to tell of their visits to the nearby Venezuelan islands. It’s well worth the long drive to experience the largely unspoilt charm of this remote region, where people still have the time to get to know you.

Another route from San Fernando along the Naparima Road leads to Princes Town, and a string of villages stretching cross-country to Rio Claro. Just past Princes Town, ask for directions to The Devil’s Woodyard, a bubbling mud volcano that is known at times to spatter the surrounding countryside. Here, majestic teak trees line the road to the site. A paved walkway takes you straight to the dozen small cones from which grey mud bubbles up. Concrete huts with tables and benches and other seating make this is a great place for a picnic, and there’s a large playground at one end of the park.

On the way back from Icacos, near Point Fortin, you can turn right towards Erin. At Erin, the road slowly turns northward again, through oilfields around Los Bajos and Palo Seco, Santa Flora, Siparia, Penal, Debe and Palmiste; from Palo Seco the surface is good. North of Debe the road crosses the M2 Ring Road which links the Cipero Road towards San Fernando in the east with the Southern Trunk Road in the west. It is a pleasant drive in itself, through former sugar lands with a good view of the Gulf coast at the western end. Or, you can head toward Fyzabad; towards Quinam Beach and nature park, or from Debe towards Barrackpore.

There are good swimming beaches on the south coast here (turn-off to the right for Buenos Ayres). Both beaches have long stretches of sand used by fishermen, with calm water. From Erin, you can look across this south coast bay to the looming bulk of Venezuela. The beach is very fine silt into which you may sink to your knees in some places; there are calm but silt-laden waters. Many of the old derricks can still be seen pumping away noiselessly.

South on the Penal Coora Road from Siparia, is a popular spot for “curry duck limes.”

South of Princes Town, this fishing village is where the arrival of Christopher Columbus’ caravels, the Pinta, Niña and Santa Maria, is re-enacted by the villagers at the beginning of August, on the holiday now designated Emancipation Day (formerly observed as Discovery Day). It is also said this Moruga is the home of obeah – native healing and magic similar to Haitian voudun and Cuban santeria – as practised by Papa Neezar. A delightful old church stands a short walk from the sea.

North of Moruga, just south of Princes Town, you can drive through the Company Villages, where African-American Baptists — known as Merikins — settled in Trinidad after the “Forgotten War” (1812 to 1814).

Stop at the cluster of food huts in Debe for fried Indian savouries – doubles, phulorie balls, sahina (fritters of bhaji), cachowri (chickpea fritters), all served with tangy chutneys or pepper sauces.  The villages of Debe, Penal and Monkey Town give a good idea of what life was like in Trinidad long before Independence. Stop at a village rumshop and chat with the locals; sample some Deep South roti, or oysters served in a piquant sauce.

The home of the famous Black Virgin, La Divina Pastora: a statue with a reputation for miraculous powers, worshipped by Hindus and Christians alike. The La Divina Pastora festival a few weeks after Easter celebrates this island saint. Siparia is also the home of Machel Montano and his HD music band.