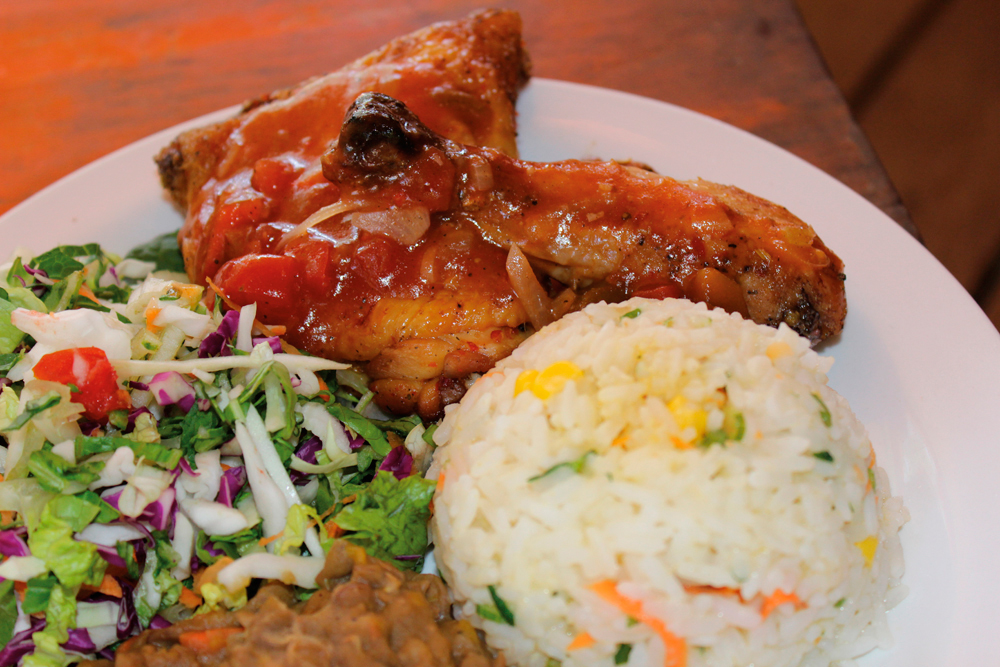 Our meats are often stewed and smothered in sublime sauces that lead to shameless bone chewing and finger licking. Photograph by Anu Lakhan

Trinidadians love food – to eat food, cook food, share food. Trinis love nothing better than to lime over a good meal, enjoying food like they do company. That gives you some idea of the culinary culture Trinidad offers. Food, and sharing it with friends, is a favourite local pastime.

As diverse as the people and history are, the culinary landscape is almost beyond “fusion”, and just its own thing. Imagine the culinary traditions of four continents blended with Trinidadian flamboyance and handed down from generation to generation. The native Amerindians discovered how to remove the poison from cassava, made staples of corn, pineapples, guavas, pawpaw, avocadoes, and cocoa. Root tubers, pigeon peas, saltfish, callaloo, black pudding and souse were all inherited as “creole food” from local African descendants. The European plantation era ensured that citrus, mangoes, sugar cane, coffee and pickled things became part of the local culture, while the indentured Indians introduced more spices, curries and cooking skills from the east.

Flavours from India, China, Africa, the Middle East and Spain complement recipes from across the Caribbean to create a truly cosmopolitan cuisine. From up-scale fine-dining establishments with elegant ambience and superb fare, to delicious street food, our ethnic diversity has given rise to many different places to eat.

Not surprisingly, then, there is an increasingly sophisticated restaurant culture in Trinidad, offering dining experiences where the atmosphere is as great a draw as the food. In recent times “Nuevo-Caribbean” establishments, whose speciality is Creole fusion dishes – blending local ingredients with haute cuisine techniques to create unique taste experiences. Especially on the outskirts of Port of Spain (Ariapita Avenue has become somewhat of a mecca), you’ll find exquisite places – Asian, American, Creole, European, Middle Eastern – often true to their themes but nuanced by Trinidadian influences. Tip: make reservations, especially for dinner.

Most of the fine dining restaurants are in and around Port of Spain, with others in the east and the south. Spanish, French, English, Indian, Chinese, American, Italian, Lebanese, Japanese, Thai—it’s all on the menu. Angelo’s offers delectable authentic Italian dining from Italian-born chef Angelo Cofone. The New York Times-featured Veni Mangé, meanwhile, offers some of the nation’s very best Creole cuisine. There are also more casual dining options for breakfast and lunch like Adam’s in Maraval. Click here for a full list of good dining options.

Some restaurants operate out of converted colonial houses, and are never short on ambience. If you don’t want anything too fancy, humbler restaurants serve more local cuisine, including the smart version called nouvelle cuisine, and Chinese restaurants are plentiful.

The modern Trinidadian taste favours a base of green seasoning: chives, onion, garlic, thyme, pepper, and chadon beni. Locally-made Angostura bitters is another favourite ingredient. Food often will be offered with hot pepper sauce and an array of condiments: garlic sauces, chutneys, pickled things, fresh salad toppings, even fruit. Trinis also put ketchup on most everything. But perhaps not in a fancy restaurant!

The Trini approach to selecting which animals can be eaten is straightforward: Once it moves, it’s going to get curried, stewed or barbecued. Beef, lamb, chicken, shrimp, ribs, fish and pig-tail – all will be cooked or charred into delectable bites. The secret to our sensuous cooking is our seasoning – a blend of chives, chadon beni (cilantro), garlic, onion, celery, pimento pepper and thyme. We also grow and use a lot of nutmeg, clove, ginger, roucou/annatto, bay leaf, anise, lemon/fever grass and spring onion.

Some of the best and most distinctive food you’ll find is on the street, or humble casual dining establishments. Trinidad has more Chinese restaurants per square mile than China itself, it seems. These legions of Cantonese-style outlets each serve dozens of dishes with every type of seafood and meat. You will also wonder, how many roti shops can one island have…?!

Until you’ve had a shrimp paratha roti with bhagi and curry mango, that is. Then, you will wonder why there aren’t more roti shops in the world. Our world-famous roti is often imitated but seldom equalled, and is a must-try. For breakfast, sada roti with tomato or pumpkin choka, a variant on the regular dhalpouri and paratha roti served for lunch, is delicious. A roti with all the fixings can cost less than US$4, and a doubles less than US$1. Garnishes of curry mango and chutney are usually on hand (but be careful with the pepper if you’ve got a sensitive tongue or stomach).

Warning: Chicken roti generally contains chicken on the bone, so be sure to ask for boneless chicken, if available. If not, take a surgical approach to the roti: open it up and remove the bones first. Or bite gingerly and proceed with caution.

Doubles is a breakfast and post-party staple. Most people start the non-stop munching at the airport – with a doubles. Flight crews make a beeline for the doubles man as they touch down. This humble-looking chapatti with curried channa is the most popular street food in Trinidad, and never fails to enrapture. Served with sauces and chutneys, doubles are sold by street vendors across the country. St James and Curepe are well-known as 24-hour doubles pit stops. Every Trini has a favourite doubles vendor. An app (on Android) called ‘Eat ah Doubles’ helps you to locate your nearest vendor.

At Maracas Bay, you’re missing a treat if you don’t tuck into a shark-and-bake* (or, for a more eco-friendly and sustainably-fished option, bake and catfish or bake and kingfish)—a round of fried dough stuffed with golden fried shark* or other fish and as many garnishes as you’re tempted to try. [*If you can, opt for the most sustainably produced fish, or a vegetarian option – some fish stocks are dangerously low in our local waters, and the balance of our eco-system at risk as a result. Ask a vendor about lionfish and bake!]

Corn soup, and corn-on-the-cob roasted on an open fire or boiled in a broth with local seasonings, are popular around the edge of the Queen’s Park Savannah. You can wash it down with some coconut water, or on a hot day cool off with some guava-flavoured syrup poured over a cup of shaved ice (a sno-cone).

Food vendors are required to display food badges from the Health Authority. Most street food is safe, but it’s best to avoid oysters.

Further down the food chain, international and local fast food operations are everywhere (Trinidad reputedly has the most KFC outlets per square mile in the world). But few visitors will have travelled to Trinidad in search of fried chicken, and in fact the local fast foods from beach and street vendors is far more interesting. Nevertheless, international fast food chains and local budget buffet restaurants offer large portions and quick service. But don’t expect much help here with a “low-carb” diet: once it’s got flour, cornmeal or rice, we’re in.

If you are trying to eat healthy, though, try Adam’s in Maraval and Subway outlets nationwide for lighter sandwiches, soups, and salads. Vegetarian visitors won’t have a hard time satisfying their hunger here. There are two major groups of vegetarians in Trinidad, devout Hindus and Rastafarians, and almost every restaurant has a selection of meatless dishes on its menu. If not, ask the chef to whip up something special for you — most will oblige happily.

Make sure to wash it all down with some freshly squeezed tropical punches (rum optional); a beastly cold, locally-brewed Carib or Stag; or some of the island’s fine rums, including the vintage Angostura 1919.

Pies are our other cheap and cheerful street favourite. Aloo (Hindi for potato) is a popular option, and comes with channa, chutney and sauces such as tamarind and mango. Saheena is made with dasheen bush, baiganie with aubergine. Beef, fish and cheese are also made into delicious fillings for both fried and flaky pastries.

Chow captures the Trini personality. Most people would look at a pineapple or mango and think, what a sweet fruit. And eat it just like that. And be happy. But no. Trinis look at a mango or a pineapple and think, Chow. They look at this sweet innocent fruit and add salt, black pepper, hot pepper, garlic, chadon beni, sometimes even onions and lime. Good god, why? But then, you taste it. And it leaves you reeling, weeping and gasping for breath – depending on how hot the pepper is. But after you’ve drunk the second gallon of water and washed your face, and your tongue has stopped throbbing, you find yourself wanting to taste it again.

Pelau is our version of Jamaica’s rice and peas – and we also add chicken or beef to this one-pot wonder that has featured so prominently in our cultural history. It was, for decades, the trademark dish of the cricket lime, the “all fours” (card game) lime, the football fete match, and the fete itself. Long before the all-inclusive fete took over the dance, pelau was the reliable dish to keep the crowd happy and full at parties.

A Sunday afternoon tradition that has survived in the modern age, ice-cream making by hand brings the added flavour of love. For a sample, try Miss Babbsie’s coconut ice cream. She is located in a small shop on Paria Main Road, Cumana, Toco (by the Roman Catholic school). This now-legendary ice cream also comes in cherry-coconut, Guinness, rum and raisin, peanut, soursop, barbadine, chocolate and seamoss.