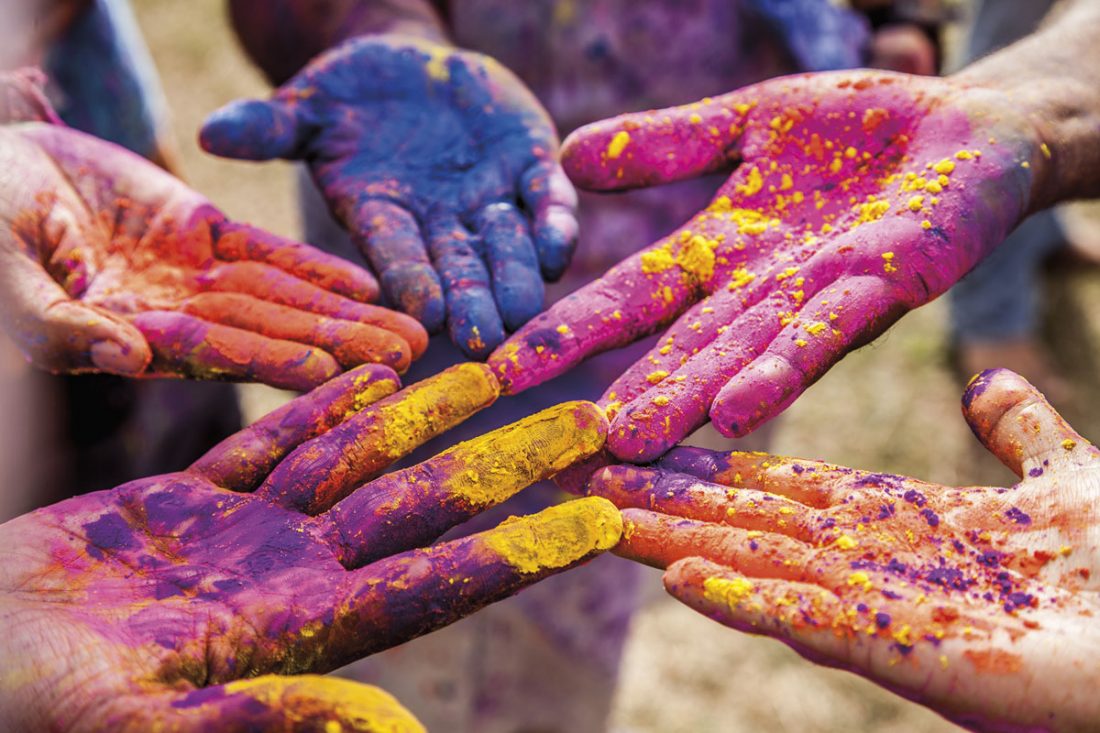 An exuberant display of song, dance, and colour, there are several potential origins for this festival, particlarly the story of Prahlaad and Holika. Prahlaad, a young Hindu prince, is condemned to death by fire because he refuses to worship the king, his father Hiranyakashipu, as god. The king’s sister, Holika, is given the task of burning the child but he survives and she perishes instead.

A major hallmark of the festival is the vegetable dye abir or abeer, a vegetable dye (commonly a distinctive purple). Phagwa participants spray different shades of abir at, on, and over one another as part of the revelry — by hand, by water gun, through balloons, and more. The dye represents the ashes of Holika (though there is also a story connecting the tradition to the deity Krishna).

Celebrated globally — usually in March — and most commonly known as Holi, the actual festival lasts for a night and a day around the full moon (Purnima in the Hindu calendar). The Trinidad festival sees the main festivities often staged on the Sunday closest to the official date. Celebrations also include chowtal singing and dancing competitions, especially among school choirs and temple groups — typically accompanied by dholak drums.

As a spring festival, Phagwa is associated with ideas of rebirth, renewal, reconciliation, and the blossoming of love. But for the casual observer, and even the devout, it is primarily a time of music and celebration. Especially popular is the Children’s Phagwa celebration, hosted each year at the Tunapuna Hindu School, while the Aranguez Savannah and the Hindu Prachaar Kendra, Longdenville are other popular venues among many nationwide.

If you attend a Phagwa celebration make sure to wear old clothes!

More on Phagwa in Trinidad

Here’s what writer Pat Ganase had to say in our sister magazine, Caribbean Beat:

Phagwa, or Holi, in Trinidad usually follows on the heels of Carnival. It is a festival of Hindu origin brought by the Indian indentured workers. Like Carnival, it is a communal joyous transformation in which participants release inhibitions — Phagwa has been called the “Indian Carnival.”

In both festivals, participants throw things (mud, powder, coloured liquid) upon each other with a spirit that’s both mischievious and gleeful. Mud (oil, grease, blue colour) applied on the street makes a J’ouvert mas’; bright liquid or powdered purple dye is the choice for Phagwa. The most dramatic crossover from Phagwa to Carnival was the mas’ trilogy River, produced by Peter Minshall from 1983–1985. Callaloo, the 1984 band, featured a climax in which the masqueraders, dressed in white, were sprayed with vivid colour — reds, greens, purples, blues and yellows — as they danced on the stage.

Girls in white dresses sit quietly on benches, hands in their laps. Boys, in white tees and trousers, will be boys, running around the compound. It is a Saturday in early March. For a few moments, you may be lulled into believing that they have come to some special Saturday classes. But the excitement and laughter belie any idea of school; and after all the singing and swaying, the children soon bubble over into wild and uncontrolled glee as they duck and run, squirting the purple liquid known as abeer at each other. The white garments become a canvas for spots and splashes of reddish purple. By the end of the morning, they are pouring the liquid over their own heads, squelching and dripping as they continue to run at anyone who may be still unpainted.

This is the children’s celebration of Phagwa, held at the Maha Sabha school outside Port of Spain in Trinidad. But it could be a small village somewhere in India too. Phagwa, or Holi, is an Indian spring celebration. The “dressing up” and throwing of colour commemorates the legend of Prahalad who was commanded by his father, the powerful and ruthless king Hrinia, to worship him as a god. When the boy refused, the king sent for his sister Holika, a witch, to take her nephew into a sacrificial fire. The fire consumed Holika and spared Prahalad. The people who witnessed the miracle embraced Prahalad and took the ashes of Holika (Holi) and scattered them on each other.

This tradition is kept alive by the descendants of indentured Indians in Trinidad and Guyana; their whose observances of Phagwa assume as many forms as in the villages of India. Coloured powders, like ashes, are thrown. In Guyana, buckets of water or mud are hurled at each other in the street. In Trinidad on the official day of the Phagwa observance, usually a Sunday, the festival explodes with colour like the flowering pink poui on the hillsides, in villages all over the island. No one who ventures near any of the celebration centres escapes without a splash of colour or a thorough soaking.

In the earlier days of Phagwa observances, the festival would begin in the morning with a re-enactment of the legend. Dressed in elaborate gilded costumes, stately Hrinia, Prahalad and Holika appeared before the crowd. After the final fire, the ashes, symbolised by a bright purple-red abeer, would be squirted everywhere.

In India, a brass squirt gun called a pichakaree was the implement used. Most Trinidadians make do with plastic bottles. Phagwa is also celebrated with vigorous drumming and singing. Choral groups perform chowtals — sometimes bawdy, spirited spring songs in Hindi — accompanied by harmonium and drums.

Within the last decade in Trinidad, celebrations in Longdenville at the Hindu Pracha Kendra, led by pundit Ravi-ji, have extended to include other aspects that link Phagwa more closely to the emerging “chutney” — crossover — culture. Instead of the Hindi chowtals, there is a competition for “pichakaree” songs — in English and Hindi — that are meant to throw fun at or squirt abeer on some issue or concern of the day. The committee at the Kendra has outlawed alcohol on that day. And the end of the programme includes feats of strength and teamwork such as “tug of war” and creating a human pyramid to fetch a prize pot of dahee (yogurt) from a perch some 30 feet off the ground.

Phagwa or Holika is celebrated in the West Indies in Trinidad, Guyana, Suriname, and those islands where small communities of descendants of India have found themselves. It is such a happy, infectious event that plenty of non-Hindus join readily in the fun.