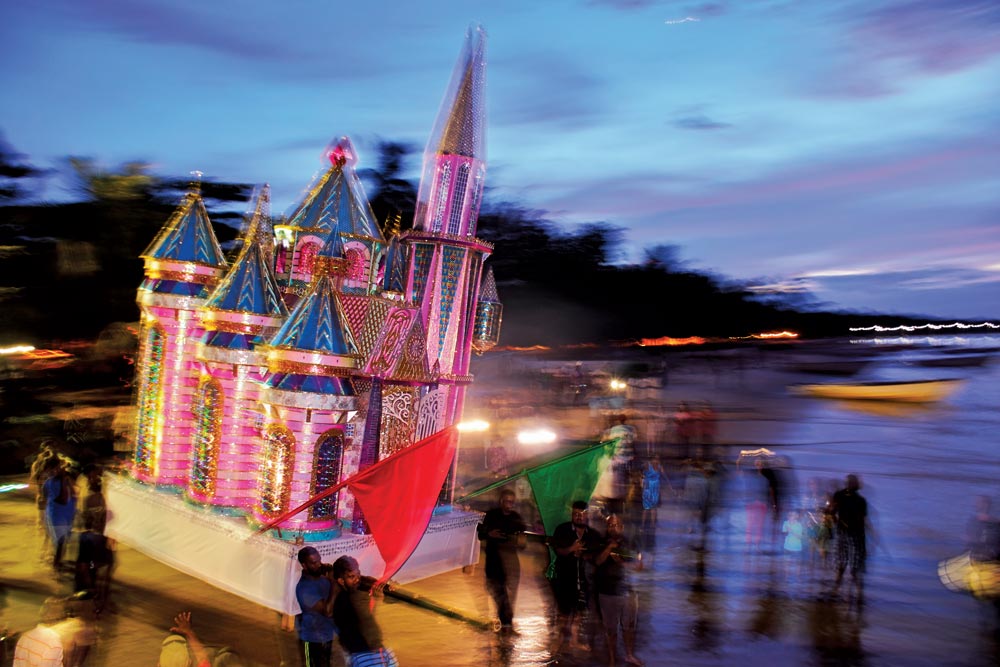 Muslim devotees at Hosay in Cedros prepare to push a tadjah out to sea after dusk. It is then moored overnight and dismantled on land the next morning. Photo by Giancarlo Lalsingh

Editor’s note: in Trinidad, a different Hosay for 2020

Due to the Coronavirus health protocols to prevent the spread of the virus, communities in Trinidad will have to celebrate Hosay differently. Unfortunately, the street processions that so many members of the community and the general public enjoy each year will not take place, with much of it taking placing indoors and only 10 people permitted to view the tadjahs at any time. Our coverage of Hosay’s origins and how it is usually commemorated is below. 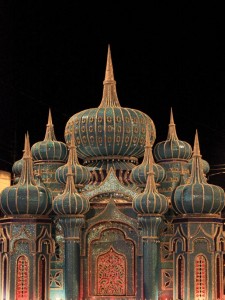 This lively Trinidadian incarnation of Islamic Muharram observances, celebrated chiefly by the Shia Muslim community, was brought to the island by Indian indentured immigrants, who came to Trinidad between 1845 and 1917 to work the sugar plantations.

The observances commemorate the martyrdom of Hussein (the Prophet Muhammad’s grandson) and the later murder of his brother Hassan. It lasts for 10 days, coming to a climax over the final three nights (Flag Night, Small Hosay, Big Hosay), and a lively procession on the final day. Exquisitely made tadjahs and crescent moons are first carried through the street, then in part cast into the sea following the final day procession.

The name, Hosay, is an onomatopoeic rendition of the name of the man the observances commemorate. The celebrations welcome and are attended by many in the national community, Muslims and non-Muslims alike. 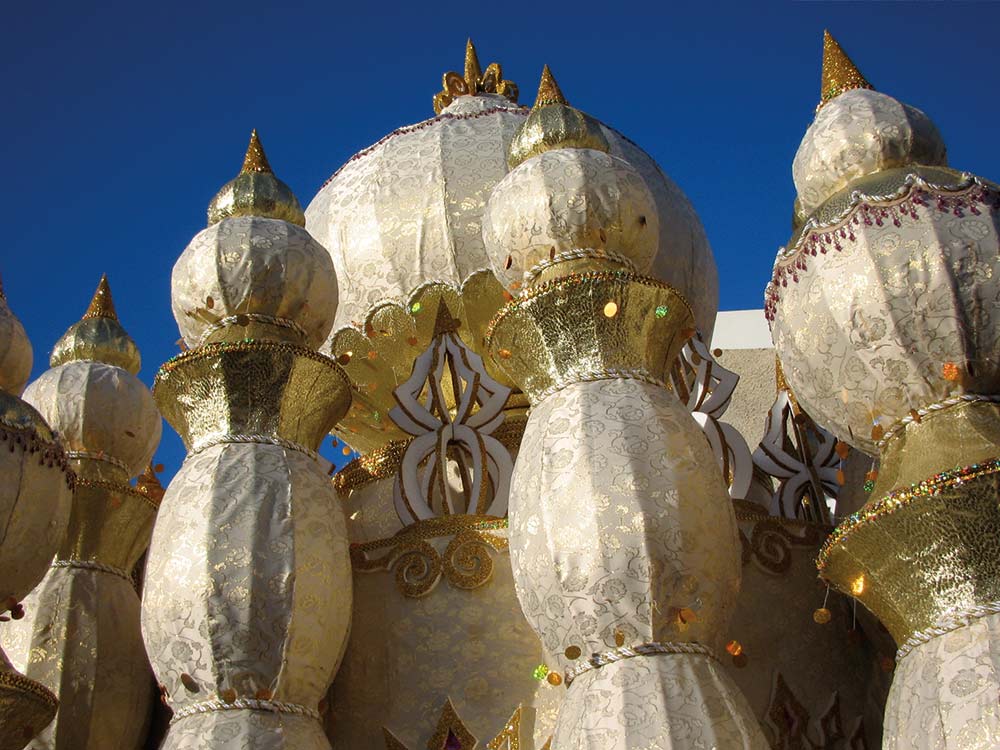 These tadjahs are ornate interpretations and replicas of Hussein’s tomb, while the moons (one red and one green) represent the two brothers. They are made from wood, paper, and styrofoam. Once, these creations were discarded whole into the ocean, but in recent years celebrants have taken different measures to minimise the negative environmental impact. 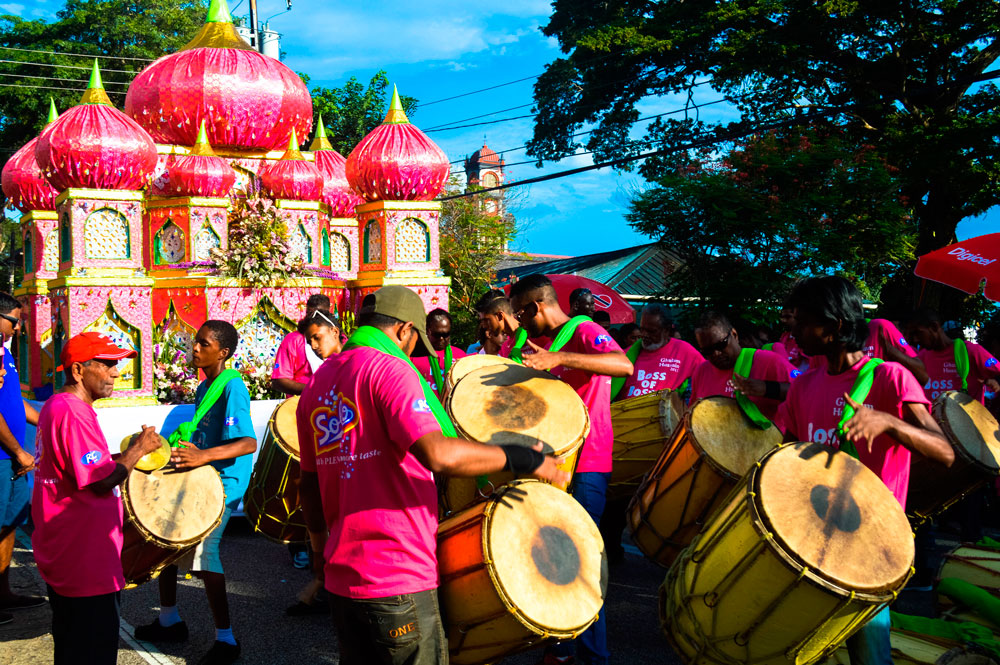 Tassa drummers play in front of a tadjah at Hosay. Photo by Aarti Gosine

The tassa drumming heard on these days are possibly as big a draw to the public as the beauty of the procession. The goatskin-covered drums are heated over fires at the roadside in order to achieve the right pitch.

Where can you experience Hosay? 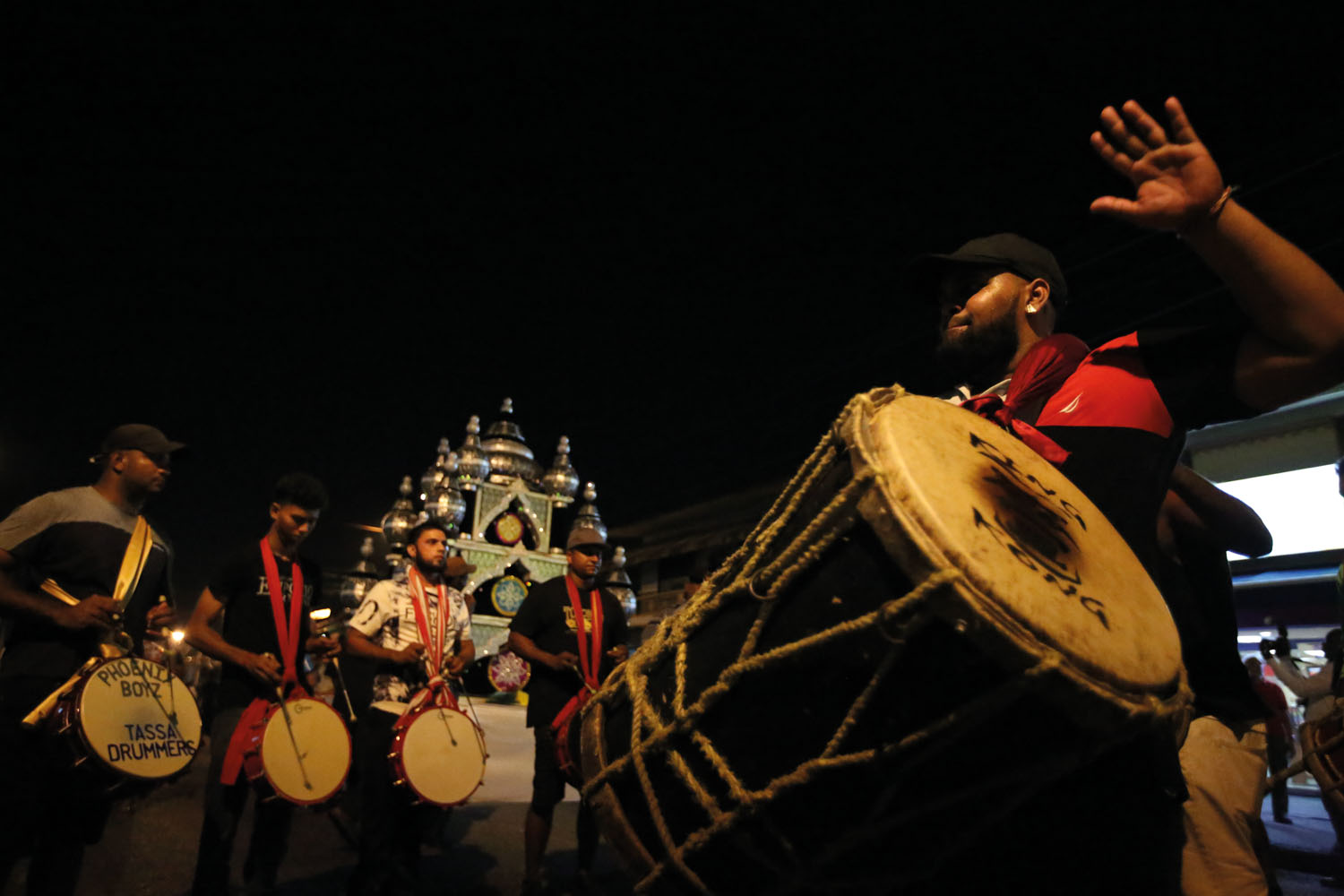 When does Hosay take place?

Hosay takes place during Muharram, the first month of the Islamic calendar. The date varies each year according to the moon, but the final day is expected to be on or around 30 August in 2020. The first roughly six days of the observances are marked by ritual fasting and prayer, during which time the final parts of the tadjahs and moons are constructed. Those who help build the tadjahs are meant to fast and to abstain from meat and sex.

Celebrants process through the streets carrying many coloured flags, symbolising the beginning of the Battle of Kerbala in which Hussein and Hassan were killed.

Once again accompanied by tassa drums, celebrants emerge with huge, stunning and intricate tadjahs, while dancers carry two large crescent moons which spin and dance toward each other.

The moons and tadjahs are carried through the streets and finally to a sacred spot where special prayers are offered for the dead before being ritually immersed in the sea. Observances end by sunset.

A tadjah at Hosay in St James. Photographer: Mark Lyndersay

Tassa drummers liven up the streets of St. James during the Muslim festival of Hosay as ‘tadjahs’ (model mausoleums) are paraded to commemorate the martyrdom of Hussein, grandson of the Prophet Muhammad. Photogaph by Edison Boodoosingh