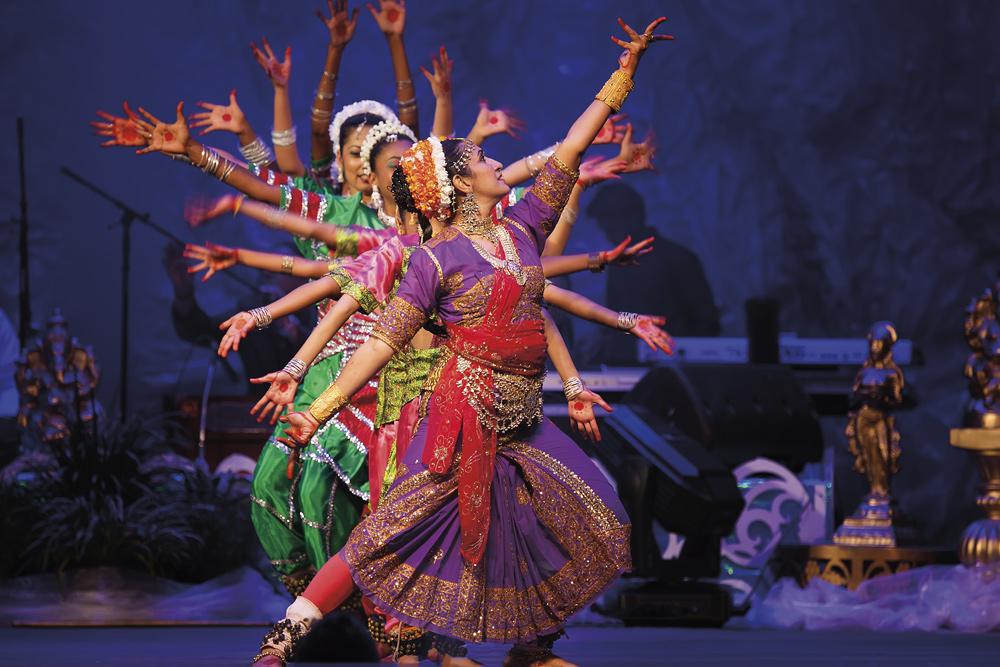 This national public holiday (30 May) commemorates the arrival of the first indentured labourers from India on the Fatel Rozack in 1845, following the Emancipation of enslaved Africans in 1838. Waves of indentured immigrants arrived at Nelson Island, off the coast of Chaguaramas, before being sent to various estates where the living conditions were often deplorable. Nearly 145,000 Indians were recruited over the next 70 years to work Trinidad’s plantations. Their arrival completely changed the island’s demographics, and its economic and sociopolitical landscape. It is consequently one of the most significant events in the islands’ history.

Colourful fabrics can be found at stores that specialise in Indian wear such as House of Jaipur. Photograph by Anu Lakhan

Henna for a Hindu wedding in Trinidad. Photo: Risa Raghunanan

After the Emancipation Proclamation that liberated African slaves in the British colonies in 1838, plantation owners were left with a significant labour problem. What resulted was a new scheme to bring immigrant labour from parts of Asia and around the world — with labourers from India coming to comprise the vast majority of the new labour force.

The first shipload of 217 immigrants (mostly men under 30) arrived on 10 May 1845 on the Fatel Rozack after a nearly four month journey. Nearly 145,000 in total came until 1917 from the British Indian provinces along the Ganges via Calcutta, and from the south via Madras. Most were Hindu in faith, and spoke Hindi or Bhojpuri. A significant number, however, were Muslim. They came from every caste in Indian society, though the overwhelming majority came from the lower castes and from rural and traditional backgrounds. Many had been recruited to come through false or misleading information they’d been given by Crown agents.

The indentureship system in which they worked in Trinidad was onerous and restrictive, with inflexible work hours, quotas, tasks, employers, and other contract terms. Any perceived breaches were punishable with fines and jail time. And the British did not, as they’d originally promised, make it easy for indentured immigrants to return home. As a result, many stayed in Trinidad and the Caribbean. Fewer than 30,000 returned to India.

As these immigrants had children, who in turn viewed Trinidad as home, the local Indian population grew exponentially, with some growing to acquire their own agricultural lands (some as grants from their Crown in lieu of their return passage to India, while others were able to buy land on the free market). On these lands, they grew rice, sugar cane, cocoa, and other food groups, and raised livestock. They built temples and mosques in the villages and communities they settled, and introduced the food, music, dance, festivals and traditions of home. By 1871, these immigrants were 25% of Trinidad’s population. By 1990, their descendants became the largest ethnic group on the island.

The history of a national holiday

Trinidad and Tobago was the first country to commemorate Indian arrival as a national holiday; it is now also celebrated in other parts of the Indian diaspora. The very first Indian Arrival Day in Trinidad was celebrated on 30 May 1945 in Skinner Park, San Fernando to mark the 100th anniversary of the Fatel Rozack‘s arrival. The Acting Governor was in attendance, as were other local icons like Adrian Cola Rienzi and Murli J. Kirpalani. Greetings were also read from Mahatma Gandhi, among others.

In subsequent years, smaller commemorations continued, including a procession and ceremony called Indian Emigration Day. In 1976, the Indian Revival & Reform Association was formed, which wanted — among other things — to preserve Indian heritage. In 1979, partnering with the Sanatan Dharma Maha Sabha, they rebranded the celebrations as Indian Arrival Day. By 1980, commemorations were also being held in towns and villages including Spring Village, Cedros, Couva, Penal, San Juan, and Chaguanas.

In the early 1990s, there were calls in the Parliament to declare Indian Arrival Day a national public holiday. In 1994, Prime Minister Patrick Manning declared the day a national holiday to mark the 150th anniversary of the Fatel Rozack‘s arrival. The holiday was to be known as Arrival Day (ostensibly to honour all indentured immigrants who came after Emancipation). However, this was changed again the following year when Basdeo Panday, who succeeded Manning as Prime Minister, declared that the name would revert to Indian Arrival Day.