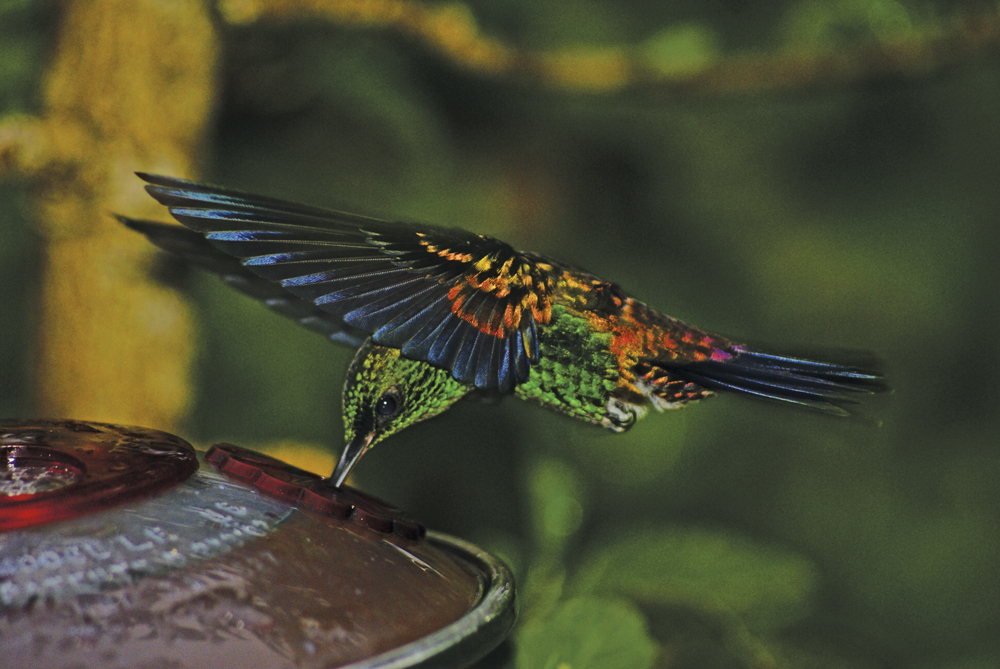 In 2012, CNN Travel listed Trinidad as having the 10th Sexiest Accent in the World (MSN Travel actually had us in the fourth spot!), saying: “For fetishists of oddball sexuality, the Caribbean island of Trinidad offers an undulating, melodic gumbo of pan-African, French, Spanish, Creole and Hindi dialects that, when adapted for English, is sex on a pogo stick…”

Land of the Hummingbird

Trinidad’s Amerindian name is Iere (some say Kairi), which either translates to “land of the hummingbird” or just simply “island”, depending on who is telling the story. Whichever it is, 19 species of the magnificent tiny birds are found on the island.

The world-renowned Angostura Bitters has been made in and exported from Trinidad & Tobago since 1875, and the company has kept their legendary recipe a secret since 1824.

All Trinis love their doubles: two fried pieces of dough (barra) filled with curried channa (chickpeas) and spiced up to taste with condiments like cucumber, mango and ‘slight’, ‘medium’ or ‘plenty’ pepper sauce. They are available across the islands from various street vendors, and now there is even an app for that (on Android) called Eat ah Doubles, which can help you to locate your nearest vendor whenever you have a craving.

Our national flower is the chaconia and our national birds are the scarlet ibis in Trinidad and the cocrico in Tobago.

Trinidad and Tobago are among the most important leatherback nesting sites in the world, with approximately 18% of the total world population nesting here. Unfortunately as few as 1 in 1,000 baby sea turtles will survive long enough to return to T&T as an adult.

Trinidad is famous for its bake and shark, especially at Maracas. But the sad fact is that shark populations worldwide have been declining rapidly, including those in T&T’s waters. Their extermination would wreak havoc on the local marine ecosystem. Meanwhile, lionfish have been spreading across the Caribbean. They are a top predator with no natural enemies, which decimate juvenile fish species on our reefs. They were spotted for the first time in Tobago a few years ago. So why not save our ecosystem by ordering catfish, king fish, shrimp,  cheese or lionfish with your bake?

If you fall ill while in T&T, take a bush bath, special brews made of potent herbs and plants steeped in the water. It is said to speed your recovery, wash off the “maljo” (bad luck, or even curses!), and bring good fortune.

This particularly West Indian habit of sucking your teeth has surprised many a visitor to T&T. But the steups is a great non-verbal way to express contempt, disgust, dismissal or just plain old-fashioned annoyance, either playfully or with dead seriousness!

A ceviche of sliced green or half-ripe fruits like mango, plums, pineapple, pommerac or cucumbers, seasoned with salt, good hot pepper and maybe a little lime juice and sugar to taste. It’s been said that once it’s a fruit, a Trini can make chow out of it!

Trinidad & Tobago’s fine flavour cocoa is some of the best in the world. It won first prize in the category of “spicy” in the prestigious Salut du Chocolat in Paris, France, in 2011. Entrepreneurs, particularly in Tobago, have been working on creating delicious, locally branded chocolate from cocoa grown right here. Read more about fine Trinidad cocoa and other “made in Trinidad” goodies here!