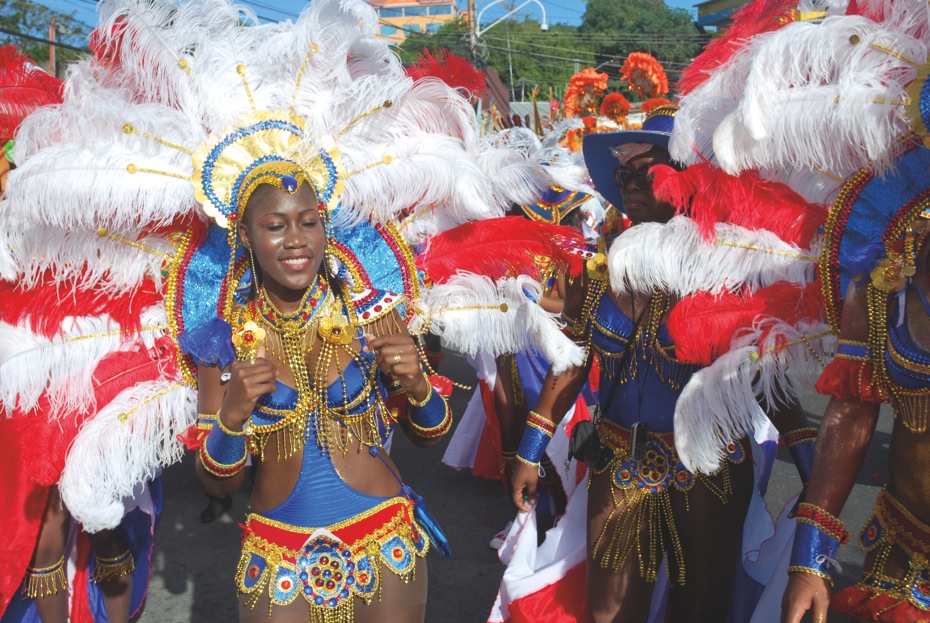 A player of contemporary "bikini beads and feathers" mas in Tobago Carnival. Photo courtesy the THA.

Tobago Carnival: the best of both worlds

While extreme energy, euphoria and expensive skimpy costumes characterise Trinidad Carnival, Tobagonians enjoy a more laid back season that focuses more on the theatrical and folk elements of Carnival. It is very unlikely that thousands of dollars will be spent on beads, bubbles and bikini costumes (though these are designs you see on the streets), and one is more likely to find that the majority play the traditional mud mas, which naturally means a delightful sea bath after to wash off.

Don’t be fooled though: the calendar of events is just as packed and varied as that of Trinidad, with an equal mix of both the traditional and contemporary aspects of Carnival. Bago Carnival is colour, creativity, calypso, sweet pan, soca, and good creole food — but she is also striking natural backdrops, historical sites, and relaxing attractions. The Bago Carnival can boast less hassle on the streets and a more intimate experience.

Tobagonian hospitality is another distinguishing feature of Bago Carnival, as masqueraders can visit mas camps, interact closely with bandleaders, and even put the finishing touches on their very own costumes. What better way to truly make your Carnival experience a personal one? Indeed the best of both worlds, as you can enjoy the creativity yet add your own customisation in a full family experience.

One major difference between Trini and Bago Carnival is that there are not as many fetes or all inclusive parties, the latter usually costing more than the average Tobagonian is willing to spend. Tobago is usually the place to go to “cool down” after the hectic “wining season”. In some ways, Tobago is for the “last lap” after Trinidad for those who need to be weaned off the frenzied energy and ecstasy that is Carnival.

The official launch of Tobago Carnival takes the form of a street parade in Scarborough in October/November and represents Carnival of yesteryear and today. The first party for the season is the Soca Spree featuring Machel Montano as the headline act. This takes place before any other Carnival fete in Trinidad, before the party season in Trinidad really starts. The next major party for the Carnival season is Soca Under the Samaan Tree, produced by Tobago’s only radio station, Radio Tambrin. Other organisations like the Lion’s Club, the Soroptimist Club also have an annual event.

The street theatre starts on Carnival Sunday with the Junior Carnival held in Roxborough. By far the biggest bands on the street on J’Ouvert morning are the Mud Mas bands, which continue to grow in popularity. It’s literally a sea of mud that slithers through the streets of downtown Scarborough from as early as three o’clock. There is a definite freedom for revellers. You wear whatever you desire, as you’ll be covered head to toe in purified and treated mud.

You gather at the mud headquarters — just outside of the capital, Scarborough — and after you indulge in the mud you parade into the heart of town amid hundreds of band members, to pulsating soca music. It’s not for the faint-hearted, but a most notable (though indirect) reward is the therapeutic quality of mud. After a few hours, your skin experiences deep exfoliation, and is softer and smoother than it has ever been. Add to this experience a “dip and splash” in the beautiful seas of Tobago to make it the ultimate fulfillment.

As the sun rises, costumed bands and ole mas bands that have been gathering uptown just before sunrise begin to make their way to down town Scarborough, while in Roxborough there is also a parade of bands through the village.

Both the children’s bands and the adult bands parade on Carnival Monday and one can literally watch revelers cross the streets until well into the night. Carnival Tuesday is for the serious revelers. All the adults turn out in full costume (very few children today!) and there is non-stop action until just after midnight.

The Carnival parade route takes costumed revellers from the hills of Scarborough down to the waterfront, where there is a majestic view of the open ocean and lush Fort King George — the best of both worlds! These views are not only perfect natural backdrops for photographs, but also teasers to the many beautiful sites and attractions around the island. Beautiful beaches are just minutes away, to either energise you for the “jump up” or soothe sore muscles. Or take a small tour before you revel in the streets. And if you think a tour before parading may be too much, then do it after: appeal to all your senses as you see, smell, taste, touch, and hear Tobago on Ash Wednesday. Again, Bago Carnival demonstrates that she can offer you the best of both worlds, from revelry to relaxation.

This inimitable musician was born and raised in Les Coteaux; took the national Calypso Monarch Crown in 2000, and national Road March title in 1974 (“Bassman”) and 2001 (“Stranger”).

The grroundbreaking musician born in Bethel who was the first woman to win national Road March title in 1977 (“Tempo”) and 1978 (“Soca Jam”); and forced Calypso King competition to be renamed Calypso Monarch when she danced away with the 1978 crown. A documentary film has been made about her: Calypso Rose: Lioness of the Jungle.

Tobago-born Nelson was a pan man before becoming a calypso legend, first in in the US (to which he immigrated as a teenager) and then back home. His distinct funk-influenced sound could be heard on hits like “Garrot Bounce”, “Stella”, “King Liar”, “Bald Head Rasta” and “Disco Daddy”. He is reported to be the first calypsonian to use computerised instruments in his recordings.

So the invitation is open: come and enjoy Bago Carnival activities from the first week in January to Ash Wednesday. Be prepared to enjoy all our offerings of steel pan, calypso, and soca music, “play a mas” on Carnival Monday and Tuesday, and indulge in the sweet serenity of Tobago’s natural beauty at sites and attractions that are always just minutes away! Bago Carnival is much more.