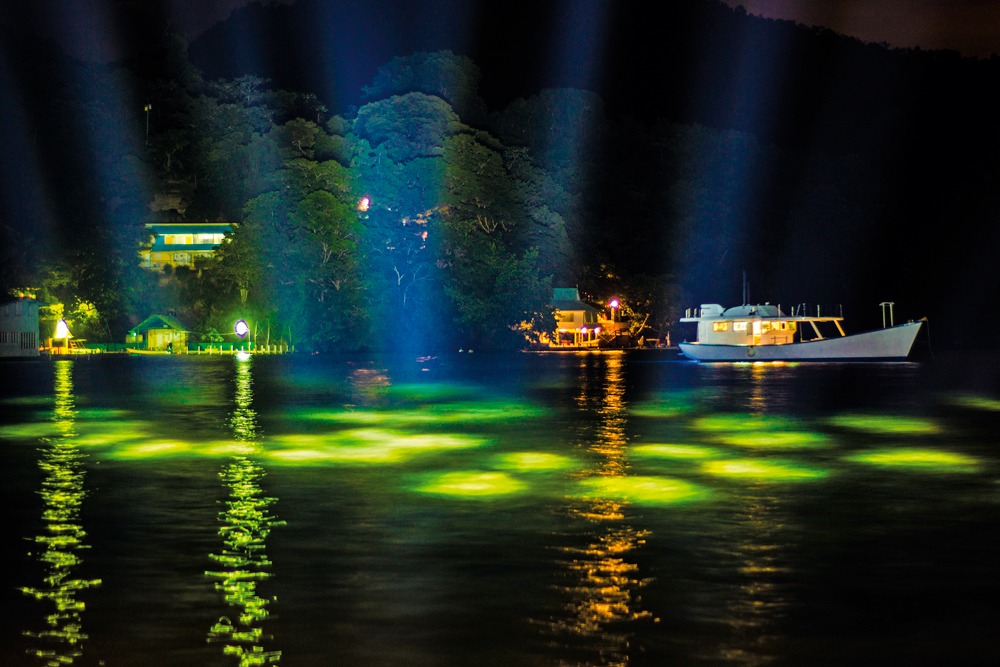 The waters of the Gulf of Paria reflect the bright lights of holiday homes down the islands, off the northwest coast of Trinidad.

The lighthouse in Toco, the most eastern point in Trinidad, has been renamed in honour of the island’s javelin champion, Keshorn Walcott. The 2012 Olympic gold medallist, the first black male athlete to win the gold medal in a throwing event in the history of the Games, was born in this tiny, remote village. At the lighthouse you can walk out on to a jagged outcrop and stand on the corner of the island where the Caribbean Sea and Atlantic Ocean meet. Below, powerful waves smash into the rocks below, rolling logs and boulders on to the beach. The view of the blue waters is both magnificent and terrifying.

St James, the city that never sleeps, is the birthplace of hip hop superstar, Nicki Minaj. The controversial performer, who was born Onika Tanya Maraj, left Trinidad for New York when she was just five. She returned in 2012 to film the music video for ‘Pound the Alarm’. St James, on the outskirts of Port of Spain, was once a sugar estate. The area was settled by East Indian indentured labourers so streets have names like Delhi, Bombay, Calcutta, Benares and Ganges. On any given night, no matter what time, people can be found liming along the Western Main Road in St James. During the Islamic festival of Hosay even non-Muslims come out in the streets and dance to the irresistible sound of tassa drums.

Siparia is the hometown of Machel Montano, the republic’s most famous soca star. The annual festival of La Divina Pastora, celebrated a few weeks after Easter, centres on an 18th century statue known as the Black Virgin. The statue’s origins are unknown, yet it is venerated by Hindus and Catholics alike. Believers of other religions, including Islam and Buddhism, as well as indigenous Waraoa Indians, have been known to worship the saint.

Montano grew up in Siparia, where he attended the Roman Catholic boys’ primary school, and then the prestigious Presentation College in San Fernando. During a career spanning more than 30 years the singer and producer has headlined almost every carnival in the world, and recorded songs with American rappers Pitbull and Busta Rhymes, dancehall artistes Buju Banton, Beenie Man, Vybz Kartel and Mr Vegas, Wyclef Jean (The Fugees), as well as Shaggy, Doug E. Fresh, and the legendary Calypso Rose.

Down the islands, off the coast of Trinidad, is Anya Ayoung-Chee’s favourite place to chill out. This chain of tiny islands is a magical place, an easy escape from the urban chaos of Port of Spain via speedboat, yacht or pirogue from any of numerous marinas. The winner of season nine of Project Runway, an American reality television series on the Lifetime network which focuses on fashion, Ayoung-Chee was crowned Miss Trinidad and Tobago Universe in 2008. A graduate of Parsons School of Design and Central St Martin’s School of Art and Design, she worked as a designer in New York until 2007, when she returned to Trinidad. Her women’s label, Pilar, continues to make waves, and her lingerie line, Anya de Rogue, remains the first of its kind in the Caribbean. She also designs costumes for the carnival band Tribe.