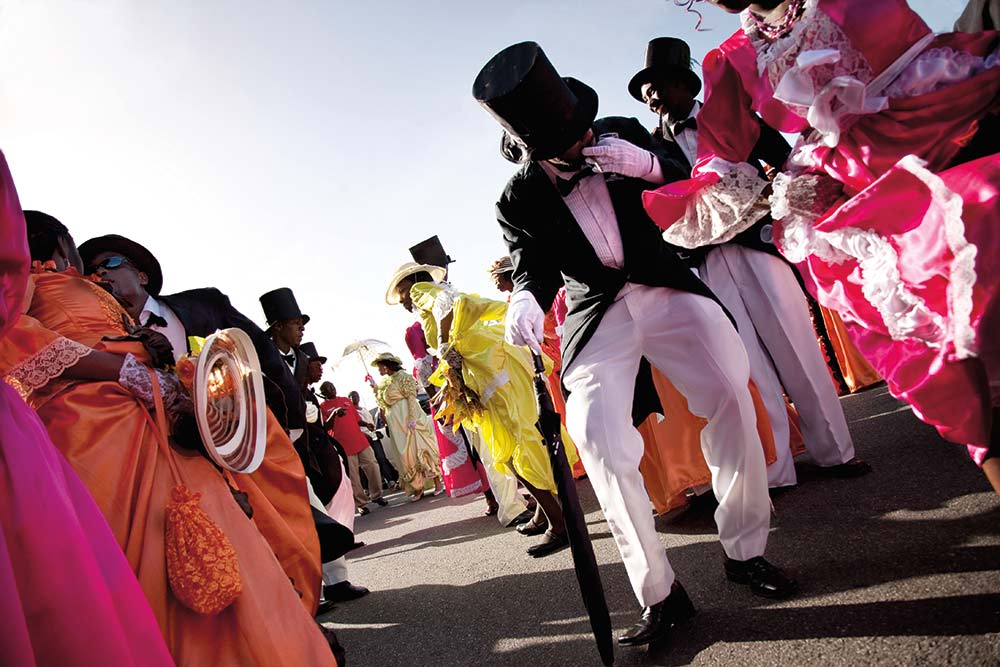 For more on national holidays, festivals and celebrations, see our Calendar & Events page.

Harvest festivals were originally village thanksgivings for the produce of the previous year. People invited friends from other villages to join them at church ceremonies, cantata (a musical entertainment by the village choirs) and something to eat afterwards. The tradition mushroomed into massive village cookouts. Now there are Sunday harvest festivals in one of the island’s villages every month, where villagers share food and drink and communal celebration.

Fisherman’s festivals take place in the coastal villages during the year, mainly on St. Peter’s Day (June 29); he is the patron saint of fishermen. Like the harvest festivals, they begin with church services in the morning and end with eating, drinking, and partying into the night. The biggest celebration takes place at Charlotteville’s Man-O’-War Bay, with other smaller festivities taking place up and down the coast.

One custom which you’re likely to come across on Tobago’s beaches is the communal retrieving of fishing nets cast close to shore. Once they’ve spotted shoals of fish, fishermen in boats drop the net in a circle from the shore. Any and everybody can help to pull in the catch, part of which you’re welcome to in return for your assistance.

Tobagonians enjoy a Carnival season that coincides with Trinidad’s Carnival, but is more laid-back and focused on the traditional, folk aspects. Mud mas is the mainstay each Jouvay (Carnival Monday morning) in Scarborough. The mud is said to be therapeutic for the skin — which of course necessitates a refreshing “sea bath” afterwards. Ole mas and costumed bands, of both adults and children, take to the streets after sunrise in both Scarborough and Roxborough on Monday.

Tuesday is essentially adults parading in full costume, with stunning views of the Scarborough harbour as the backdrop. The season officially launches with a street parade in Scarborough in October/November featuring traditional mas characters. The first party for the season is the Soca Spree, before the Trinidad fete season has begun in earnest, and typically features Machel Montano as the headline act.

The Tobago House of Assembly (THA)’s Inter-department Queen and Calypso Show, and the Roxborough Afro-Queen and Windward Calypso Show, are staple seasonal events. Make sure to visit the pan yards of Tobago’s top steel-bands, like Dixieland, Redemption Sound Setters, and Katzenjammers. There has been debate for several years about whether Tobago’s Carnival should be moved, so as not to be overshadowed by Trinidad’s, but for 2016 at least, it looks like the traditional pre-Lenten celebrations will go on.

Held at Pigeon Point in Tobago, it’s also known as the “festival of wind”. It is a combination of four sailing categories: Optimists and Bum Boat sailing, as well as the more dynamic Windsurf and Kite Surfing classes.

Perhaps the most unique of all Tobagonian traditions is the Goat and Crab Races. At Easter time only Friday and Monday are official holidays, but Easter Tuesday is not really a day for work in Tobago: everyone heads to Buccoo for the Family Day and Goat and Crab Races. Started over 80 years ago, goat racing is a response to the colonial class’ pastime of racing thoroughbred horses in Trinidad. Here you can watch competing goats race helter-skelter to the finish line, prodded by barefoot “jockeys” who sprint behind their charges holding them at the end of long ropes. This is a serious business for the owners, trainers, jockeys and those who place unofficial bets. The event is held on Easter Monday and Tuesday at Mt. Pleasant and Buccoo, the main location. The Festival is so nice it’s done twice: first from Easter Sunday to the following Tuesday, and then again for the Heritage Festival mid-year.

All the trappings of horse racing are still there – stables, trainers, live commentators – except that the “jockeys” have to run alongside their steeds. On each occasion, there is special training for the goat “jockeys”, and a 110m track is constructed especially for this race; even Virgin Atlantic’s Richard Branson has taken part. Alpines, Toggenburgs and Saanens, all a head above the garden variety of goat you’ll meet grazing roadside, have special diets (oats, vitamins, pigeon peas for iron) and training regimens for months. Stamina is built by taking the goats swimming. The racing goats decked out in their coloured coats are as impressive as any Arab stallion — and can they move!

In the crab race, jockeys use a short length of string to guide the competing crustaceans toward a checkered flag (poking and prodding are also legitimate techniques). The crabs’ somewhat dubious reward for their usually slow, sideways effort is inclusion in a pot of crab ’n’ dumpling…

Produced each May/June by the Tourism Department of the THA, this free international culinary event invites you to sample dishes from around the world, and especially those native to Tobago, against the beautiful backdrop of Pigeon Point Heritage Park. The island’s best chefs and cooks compete in culinary skills contests, while the barmen face off in a mixology contest. A wine zone features both local and international wines.

A week-long dive festival in which north and south reef diving expeditions are held daily, supplemented by seminars and presentations on the mechanics and safety guidelines surrounding best diving practices. NB: this event has not taken place over the last couple of years.

What event gives you the chance to be part of a 18th-century-style wedding procession, listen to lively storytelling, sample Tobagonian delicacies, get the inside scoop on obeah, and jig to the rhythms of tambrin drum and fiddle? Why, the Tobago Heritage Festival, of course! Drag yuh bow, Mista Fiddla! The Tobago Heritage Festival is the most anticipated event on Tobago’s cultural calendar, running for two weeks from mid-July to August 1. It is the premier cultural event on the island, with a new theme every year.

Started in 1987, it is dedicated to preserving the cultural traditions of the people of the island. Aside from the opening and closing nights, the productions take you to different villages for dances, food, music, storytelling and other traditions.The festival serves not only as an entertainment event, but a way of teaching and passing on communal values and customs. Each village produces an event showcasing the island’s unique mores and traditions. The action moves nightly from village to village, with communities presenting local traditions of dance, drama, music, storytelling and food. Typical presentations are the Ole Time Tobago Wedding in Moriah, Folk Tales and Superstitions in Golden Lane and Les Coteaux, Games We Used to Play, Salaka Feast and Invocation Dance.

Started in Canada by Trinidad-born Muhtadi Thomas, the Muhtadi International Drumming Festival has had a Tobago edition each August since 2005. Drummers from all over the globe celebrate the personality of the drum in all its forms over two days, with daytime workshops and live performances at night. The event has drawn performers from the Ivory Coast, Guadeloupe, India, and of course, Trinidad and Tobago. NB: this event has not taken place over the last couple of years.

The Great Race (August) is a major event that draws Trinidadians to Tobago in droves. First held in 1969, this speed-boat race of about 115 miles starts early in the at the Port of Spain waterfront and ends in Scarborough, Tobago about three hours later — with the ultimate beach party (which starts well before the boats reach the finish line and ends in the wee hours of the next morning). The race starts early in the morning, and the first boats arrive within two to three hours in Scarborough. Originally tied to the Great Race festivities, Tobago’s Great Fête Weekend (July/August) is now a separate five-day beach party at Store Bay, Pigeon Point and Mt. Irvine.

Tobago Fest is a recent addition to Tobago’s social calendar. This Trini-style Carnival takes place in September. In keeping with Carnival tradition there’s a Parade of Bands, a Fest Queen Contest, Night Mas’, J’Ouvert, soca concerts and steelband. NB: this event has not taken place over the last couple of years.

The Blue Food Festival celebrates the use of local root crops in food preparation, especially dasheen. This October event brings the whole island to Bloody Bay on the northwest coast. A truly unique culinary experience, it sees the dasheen plant – all of it – used to prepare all kinds of mouth-watering dishes, including bread, cookies, lasagne, and even ice-cream. “Blue food” covers any root crop from the ground, like sweet potato, cassava, or yam. Why blue? Some varieties of dasheen can turn blue or indigo when cooked, so the expression has become a catchall for root crops in general. The event is hosted by the village councils of Bloody Bay, L’Anse Fourmi and Parlatuvier in early to mid October, in the lead up to National Tourism Week.

For a full listing of annual events and public holidays, visit the Calendar section.