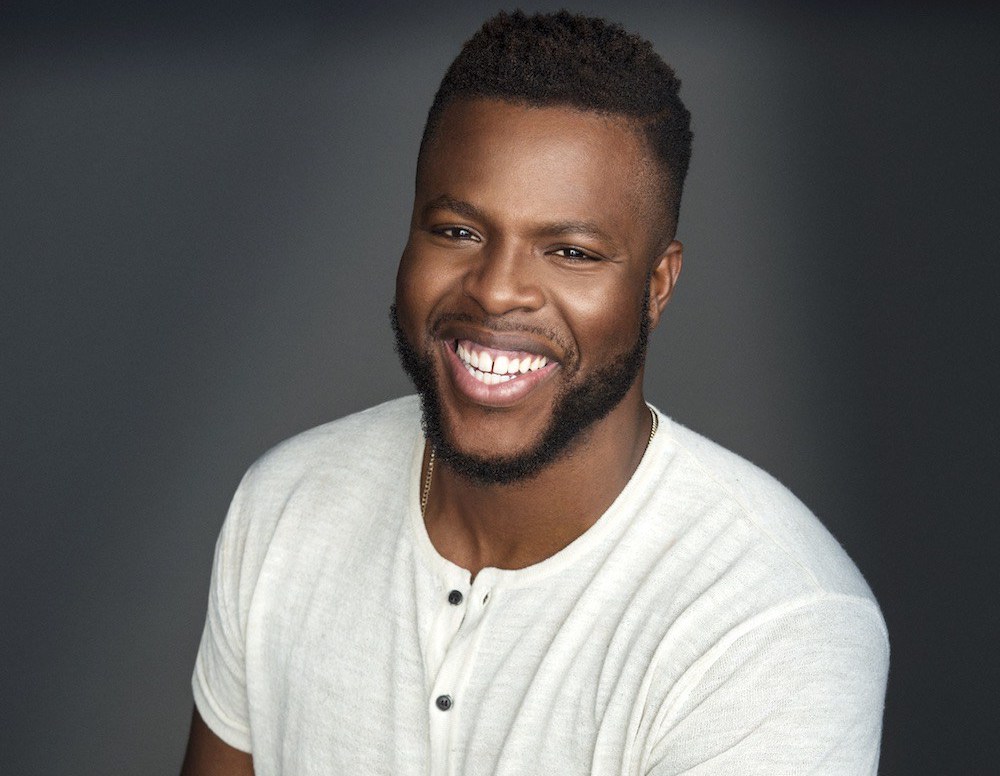 When did you leave Tobago, and what do you remember from your childhood there?

I left Tobago when I was about 10 years old. My memories of Tobago are of running up and down on the beach, exploring my neighborhood with friends, and a strong community of family. Family that always cooked and laughed together, family that supported each other and came over any day they chose to. I remember freshly baked bread and sweet bread which my cousin, who lived about 10 miles [and] four villages away, would make and have her teenage son deliver to us via bicycle. I really remember routine, and being part of something and somewhere — knowing that I belonged.

Something in particular which is etched in my memory is my village’s annual Harvest Festival (an almost weekly staple of Tobago life). There was nothing, and has been nothing in my life ever since, that compared to that kind of familial and community interaction… My entire village cooking and opening their homes for others — including complete strangers — to freely eat, drink, dance and converse. This allowed everyone to get to know each other better, and share both the celebration and the struggle of island life.

Where did your family relocate to in the US, and what was that transition like for you?

I moved to Brooklyn, New York and the transition for me was incredibly hard. It was a huge culture shock. I came from an extended family in Tobago (my maternal grandmother bore 12 children), that easily spans at least 250 people… so emigrating to a place where it’s just your mother and sister and little to no support systems was hard. In an environment that is foreign in culture, mindset and development — it was hard to acclimate. I think I retreated deeply within myself. Brooklyn wasn’t a safe space for me. I remember our first year living at our new studio apartment, it was broken into and all we had was stolen. I often wanted us to come back home but I also knew it just was not the plan. The plan was to build… to achieve … to gain something different and valuable.

How often do you get back to T&T?

I try to return at least once a year. Most recently I was there, briefly, in the days before Carnival 2017 [and Carnival 2018], but then had to rush back to set to complete shooting for Black Panther.

How have you managed to stay grounded over the years, and what continues to motivate you?

I try to get back to T&T at least once a year. It never works out perfectly to be there for Carnival but I try every year. I fail because Carnival usually falls [during] some of the busiest times of year for me. That said, I love coming home. It charges me up and reminds me of what my life is about. What I love about my Trinbago “homeness” is that there are still a lot of things in process. Homes get built by people with their bare hands, with their blocks and cement and PVC pipes and things aren’t finished and it always feels like me. I’m in process … I’m unfinished. I always will feel like I’m in development and that’s just a great mind space to find oneself in. Film, and my current life, are all about the product and the end result but to me, it’s the story in the process that makes everything worthwhile. The process of development leads to the product. So my focus tends to stay there, and coming home always reminds me of that! Simply put, coming home keeps me grounded.

What made you want to become an actor, and when was that?

I wanted to become an actor because I love stories and I wanted to be a part of the telling of great stories to as many people as I could. Thus, my going in to film and television. In terms of process, I defined my life’s mission and figured out early on that I wanted to be a part of stories which shed light on the lives of people not often given the opportunity to tell their side of the story … you know, stories that reflect the lives of people who don’t always get to have a voice.

My love for storytelling started back home in Tobago! I would listen to the older people in my village tell folklore stories about a gold-toothed donkey that they believe was a person who could shape-shift…or of the Douens which were supposedly the souls of children who died before they were christened … or of this old man (Papa Bois) who lived in the forest and would protect it from hunters … All of these extemporaneous stories would serve to both scare the crap out of me and also send my imagination running wild! Funnily enough, despite the fear that [the stories] instilled, I would always ask them to be told to me every time older family and friends dropped by our house or restaurant … And let me tell you, they loved telling me those stories as well. This I think created my love for the genre of magical realism to this day …a genre I wish to explore further in my artistic future.

What was it like filming the Marvel films — and to land the role?

Landing the role of M’Baku in Black Panther was incredible for me! I just wanted to get in the room. I told my representation to just get me an audition and I’ll do the rest. I loved Ryan Coogler’s work … I remember being incredibly moved by Fruitvale Station and knowing one day that’s the kind of storyteller I want to work with. One with a clear and distinct voice.

What was it like for this to be your first film?

Being on the Black Panther set was something that I never experienced before. Working with my own personal heroes in that superhero setting was something poetically epic for me. To be able to meet and work alongside Angela Bassett, Forest Whittaker, Martin Freeman and Chadwick Boseman, to name a few of this incredible ensemble, and not end up feeling out of place was something I had ever only dreamed of before this movie. Also, the knowledge that I was part of something that would allow people of colour all over the world to see themselves represented was incredibly surreal. What helped me to stay grounded was a keen and detailed attention to storytelling. I was careful to constantly check in with who M’Baku was, what his attachments are and what do I wanted the world to see when they meet this man? I wanted viewers to see a strong and impassioned leader willing to do whatever he has to for the betterment of his people.

Additionally, seeing all the extras that were used to make Wakanda come to life was something magical. I remember thinking: “wow, this doesn’t happen every day…this is big! Ok … back to work”! Also, it was during our costume screen — before any shooting had taken place — and I was standing next to Chadwick Boseman, Micheal B Jordan and Daniel Kaluuya … and it all clicked … “I’m in this … this is huge …”

It’s a very charged environment at the moment — in Hollywood, in the US, and internationally. Does this have any impact on your work, your journey? Are you seeing any positive changes in terms of the art that people are producing, or how people are approaching their work?

The climate of Hollywood certainly does have an impact on my journey. Hollywood is going through a period where a lot of people are advocating for inclusion and representation and I think that directly correlates to the opportunities I am getting. Also people are crying out for transparency, equality, and equity so it’s a space that will and is empowering artists such as myself who, perhaps, do not fit some of the previously held notions of leading male or leading female actor. New stories — which depict or are influenced by a spectrum of experiences of people of the African diaspora — have certainly created spaces for people like me to tell stories in which I can feel I have personal investment… stories which were not given the time and attention before. I am 6’5”, 230lbs and I think now is the time when the possibilities are higher for me to play people with depth… not just goons and muscle … but layered and thinking individuals who have complex motivations.

Piggy-backing off of that question, and as a Caribbean-born person, what opportunities do you think there are for Caribbean actors and filmmakers in the current landscape?

I believe it creates a huge market for strong stories that can come from the Caribbean — our folklore, our knack for great drama and storytelling has its place now! We just have to create the narrative. It’s not like it hasn’t been done before … just think Euzhan Palcy, Sydney Poitier as zenith examples! We have beautiful sub-cultures which can and should be explored! Our relationship to the sea and our fishermen; our mixed/blended cultures and the trials that come with that; our richly mixed and painful history of rebellion, revolution and discovery… all of these stories are present in our Caribbean culture and I would say the time is now. The world is “smaller” due to the internet and social media. People are craving their reflection …

Where would you like your career to go? (Writing? Directing? Producing?)

I would like my career to go into writing and producing stories about the immigrant experience. I love stories about the outsider who, through sheer will, creates their own path! I would love to explore more magical realism, and follow my personal mission of depicting people who usually don’t get seen or given the opportunity to be visible. I want to make the invisible visible!

More immediately — what’s next for you as far as projects (ones coming out soon, and/or that you’re filming/prepping)?

I’m not yet able to say what’s next for me … But I can assure you to stay tuned! Great things are coming!

Anyone you want to give a shout-out to — family, friends, colleagues, etc?

I want to say a big shout out to Bunji Garlin and Machel Montano… because I listen to their music almost every day. I listen to their lyrics of artistry, patience, process and integrity. It reminds me that I come from a place with beautiful people who create and know themselves. It makes me further interrogate who I am and why I do what I do. #BussHead And of course, forever peace and love to my mother, sister and extended Caribbean family! Big up!

And any parting words of inspiration for Caribbean actors and filmmakers in the region and beyond?

Know who you are … have a mission, know why you do it and be specific. Once you master and own this, no one will be able to define who you are outside of your own intentions!

Black Panther will be released on 9 February in the UK, and 16 February 2018 in the US. Avengers: Infinity War is due out in late April 2018.