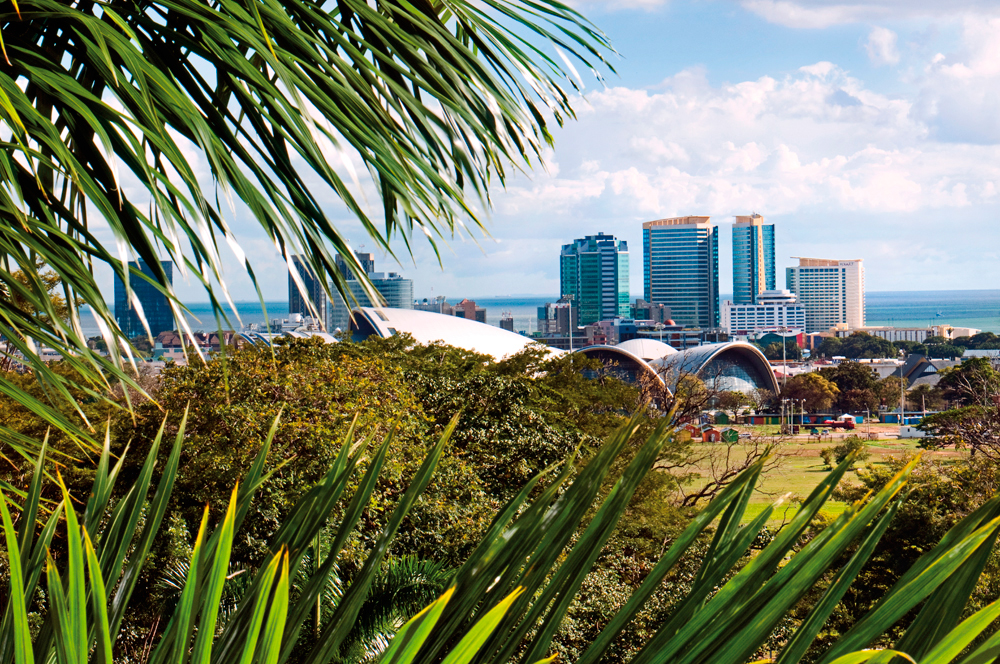 View from the Hilton. Courtesy The Hilton Trinidad & Conference Centre

Trinidad: not your yypical Caribbean island

Carnival and oil: that’s what most people know about Trinidad. But there is some distance between the worlds of festival and fuel and that space is filled with things to do, stories to hear, a lifestyle to experience and, most of all, people.

Culturally, historically and ecologically rich, Trinidad is not a postcard Caribbean destination. It’s not as laid back as it might at first appear. Energy – both from oil and natural gas, and from the seemingly bottomless resources of its people – give Trinidad a country-on-the-rise vibe not usually associated with the Caribbean.

With an economy fuelled by energy and petrochemicals, Trinidad is hardly your typical Caribbean tourist island. This is an fast-paced, industrialised, cosmopolitan nation eager to stake its claim among the big, developed nations of the world. What we have to share with visitors is not only sand and sea, but a rich natural environment and a vibrant culture that leaves even the most seasoned traveller awe-struck.

South African Archbishop Desmond Tutu once referred to Trinidad as the “rainbow nation”, and visitors to these shores are often amazed at the mix of ethnicities. People whose ancestors came from India, Africa, China, Europe and the Middle East have lived here for generations, and they’ve all helped create that unique Trinidadian flavour. From food and festivals to music and lifestyle, Trinidad’s cultural life is overflowing with energy and colour.

It’s the people who make a visit to Trinidad very different from what you expect of Caribbean destinations. Walk through downtown Port of Spain, spend the day at Maracas Bay, try to catch a cricket match at the Queen’s Park Oval. Trinidadians are characters. Our humour is irreverent and all-encompassing. Our hearts are welcoming. We are sensuous. We’ve not got the hang of political correctness.

This is who we are: we are the First Peoples who lived here before all others; the conquering Spanish who turned up in 1498 when Columbus was collecting islands; the French, and English planters who looked into our green heart and saw cocoa, coffee and sugar. We are the enslaved Africans and indentured Indians who worked those profitable fields. And we are all the other people who found their way here looking for a new home: Chinese, Syrian, Portuguese.

That kind of history could have gone one of two ways: all-out mayhem or something resembling a giant UN picnic. So far, for the most part, the picnic’s been great.

Our most visible cultural gift to the world is Carnival; if you haven’t visited Trinidad for sun and sea or for bird watching, chances are the stamp in your passport is for this. The festival that has become a model for Carnival-making around the world – the “greatest show on earth”, as we like to call it – is a whole season of music, partying and fun, fuelled by the rhythms of calypso and steelband, culminating in the full-scale abandon of the street masquerade. Carnival was born out of slavery, a people’s expression of rebellion against authority.

Now it belongs to us all. (In fact, Trinidad’s Carnival has spawned more than 100 clones around the world, including New York’s West Indian-American Day Parade and London’s Notting Hill Carnival.) But even if you don’t make it for Carnival, there’s always something exciting to do or see in Trinidad. Our multi-cultural community celebrates various festivals during the year, and there are numerous sporting events, music festivals and events showcasing our folk culture and local cuisine.

Port of Spain, our capital, is always bustling with activity, and beyond our urban areas (though not too far away) there’s a world of natural beauty to discover. So, come with us as we introduce you to one of the Caribbean’s most unique and diverse destinations — we promise you nothing less than a thrilling time.

Expect good restaurants and great street food. Go shopping for everything from hand-crafted leather sandals to the top designer brands. Nightlife – uptown, downtown and everything in between – is practically inescapable, unless you’re staying out of town at a nature lodge.

50 miles or so from north to south, 30 miles across the middle (though nearly twice that at its northern and southern peninsulas), Trinidad doesn’t look that big on the map, does it? Good highways connect Port of Spain with San Fernando and Arima, and nowhere is more than three hours’ driving from the capital.

But it can take a surprisingly long time to explore Trinidad. Traffic on the major roads is heavy, and minor roads tend to be narrow, winding and often pot-holed. So allow plenty of time. Keep your gas tank topped up. On the road, drive very carefully; watch for unexpected bends, eccentric and reckless drivers, rickety bridges, ancient trucks and toiling pickups without lights.

The routes suggested in our Touring series sample most of the different regions, each with its own character: the rugged north coast, the forested Northern Range, the Chaguaramas peninsula and its offshore islands, the windswept beaches of the east, the plains of Caroni, the villages and rolling hills of the south.

Much of Trinidad is surprisingly built up, villages merging into one another, ribbon development stretching out to Arima, San Fernando and Princes Town. Tumbledown wooden shacks rub shoulders with opulent mansions, churches with mosques and temples; Hindu homes fly prayer flags on long bamboo poles. In some areas, visitors are still objects of curiosity.

The most beautiful parts of the island are to be found in the hills and forests and along the coast. That’s why these drives seek out natural beauty rather than conventional sight-seeing.