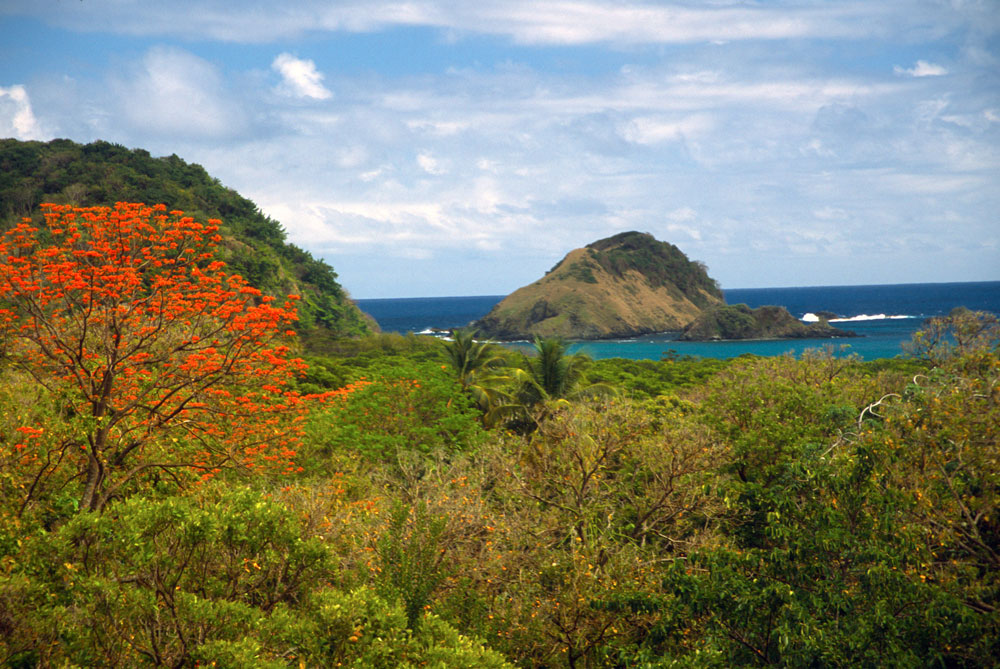 The north coast of Tobago. Photo by Stephen Broadbridge

Trinidad is the southernmost Caribbean island: just seven miles from Venezuela at its closest point. Geologically, the island is not Caribbean at all – it is essentially a fragment of Venezuela set free. The South American neighbour cradles Trinidad: it is the closest land to the island’s southern and north-western coasts.

Separating Trinidad’s west coast from Venezuela is the Gulf of Paria. The southern channel between the two countries is called the Columbus Channel. Trinidad’s north coast borders the Caribbean Sea; its east coast meets the Atlantic Ocean.

The major municipalities – Port of Spain, Chaguanas, San Fernando – run in a straight line from north to south down the west side of the island.

Port of Spain sits in the north-west corner of the island, in the foothills of the Northern Range, which dominates the landscape of the north side of the island.

The East-West corridor is a relatively short stretch from Port of Spain to Arima – less than 20 miles – of densely populated towns running across the north end of the island.

It is estimated almost half (approx. 550,000 people) of the population of Trinidad and Tobago lives along the East-West corridor, which is primarily defined by the route of the Eastern Main Road. Traffic can be particularly heavy; knowledge of the less travelled routes between Port of Spain and Arima separates the local from the visitor.

To the west of Port of Spain is Chaguaramas: the north-western peninsula. In the Gulf of Paria, easily accessible by boat from Chaguaramas, are The Five Islands. Oddly enough, there are six of them: Caledonia, Craig, Lenagan, Nelson, Pelican, and Rock.

Between the north-western tip of Trinidad and the Paria peninsula of Venezuela are the Bocas Islands, popular destination for boat trips, generally referred to as going “down the islands”.

Toco marks the north-eastern corner of Trinidad, and watches over the point of the coastline where the Caribbean Sea and Atlantic Ocean meet.

The Central plains of Trinidad were once the principal site of the country’s sugar cane industry. Those days are gone. Chaguanas is the de facto capital of Trinidad’s Central region, though it is closer to the west coast than the island’s centre.

Between Port of Spain and Chaguanas you will find Piarco Airport and the Caroni bird sanctuary.

East of Chaguanas is Nariva Swamp, an unpromising name for a freshwater wetland of great ecological significance, and the Atlantic Coast.

Signs for San Fernando start almost as soon as one exits Port of Spain, and it is the second largest municipality on the island. The unofficial southern capital of Trinidad, San Fernando is more a gateway to the south than actually southern: almost a third of the island lies beyond it.

Joined with Trinidad for reasons of history, Tobago is geographically distinct from its sister island. Owing nothing to the South American continent, its land was formed by processes more characteristic of the other islands of the Caribbean archipelago: hence Tobago’s greater resemblance to the postcard archetypes of the region.

Often described as cigar-shaped, the island might equally be described as having the shape of a manatee, tail facing Trinidad (21 miles away to the southwest) and head pointed toward Barbados (about 150 miles northeast). Grenada is about 90 miles off Tobago’s east coast.

The south-western tip of the island houses the airport, many of the major hotels, and Buccoo Reef National Park, which includes Pigeon Point and the Nylon Pool.

Scarborough, the capital and main port (the ferry from Trinidad docks there), is tucked into a bay on the west coast, on the southern half of the island.

The northern half of Tobago is dominated by the Main Ridge: the world’s oldest legally protected forest reserve for reasons of conservation. The land has been protected by ordinance since 1776.

The northern tip of the island includes the town of Speyside, the main point of departure for boats heading for Little Tobago, a bird sanctuary just off the coast.

The Northside road carries vehicles along Tobago’s east coast, offering views of the Caribbean Sea. The Windward road tracks the west coast and overlooks the Atlantic.

A quick means of orienting yourself in Tobago: if you pass a beach with a swashbuckling name – Bloody Bay, Man of War Bay, Pirates Bay – you are probably on the east coast; west coast beaches – Kings Bay, Queens Bay, Princes Bay – tend toward a more aspirational nomenclature.

A population as diverse as the planet

Amerindians from the South American mainland – mainly from the Kalinago and Taino tribes – first settled the islands. On Christopher Columbus’ third voyage he claimed the islands for the Spanish crown. Trinidad remained in Spanish hands until 1797, though largely settled by French planters.

Tobago changed hands 27 times between the British, French, Dutch and Courlanders, but eventually ended up in British hands. In 1889 the two islands were joined to form a single crown colony. Trinidad and Tobago obtained its independence from the British Empire in 1962 and became a republic in 1976.

Over the last few decades, Trinidad’s enormous wealth has attracted immigrants from neighbouring Grenada, St Vincent, Jamaica, Cuba, Venezuela, and as far away as Syria, Lebanon, Germany, Nigeria – to add to the already dazzling mix of Afro-Trinis (whose ancestors were mainly from West Africa – Nigeria and Ghana), Indo-Trinis (from Uttar Pradesh and Madras), Asian Trinis (from Guangdong Province and Hong Kong), as well as the remaining descendants of the First Peoples (Amerindians), many of whom live in Arima and Valencia.

Click here for a historical timeline of the islands.